A week after becoming the whipping boy of the #10 Utah Mormons the Iowa State Cyclones travel to the state of Oklahoma for the daunting task of taking on the #6 Sooners. Much like a 9-Curic turd, it's probably going to be fucking painful, but you can't ignore it and hope it goes away you just have to shut your eyes, push and hope nothing tears. (Ok, so the football team probably shouldn't close its eyes - but the rest of the analogy is legit) I'm going to cheat this week and do even less research than the history of Utah piece, but to make up for the lack of insight I promise you extra pictures of scantily clad women. You know I take care of you.

I found it amazing I was able to find such high-quality state outlines in a soothingly-gay shade of purple. A big Thank you to whatever intern took the time to make those happen. Iowa and Oklahoma are two of the "not-quite a rectangle" states that make up most of the Midwest. Iowa is bordered on two sides by rivers and has sort of a "nose shape" on its eastern border, which is cool I guess. Oklahoma has a much more distinct "frying pan" or "needle-dick and ballsac" shape. I'm assuming that's some sort of river on its southern border or there was some serious drinking at the "what part of Texas do we want" convention. Iowa was admitted to the Union as the 29th state sometime in 1846, Oklahoma had to wait until all of the other continental states had picked their land before joining up with what was left as the 48th state in 1992. Famously, Tom Cruise and Nicole Kidman were two of the early Sooner settlers and helped to populate the state with short red-headed scientologists that dominate the Oklahoma demographics. 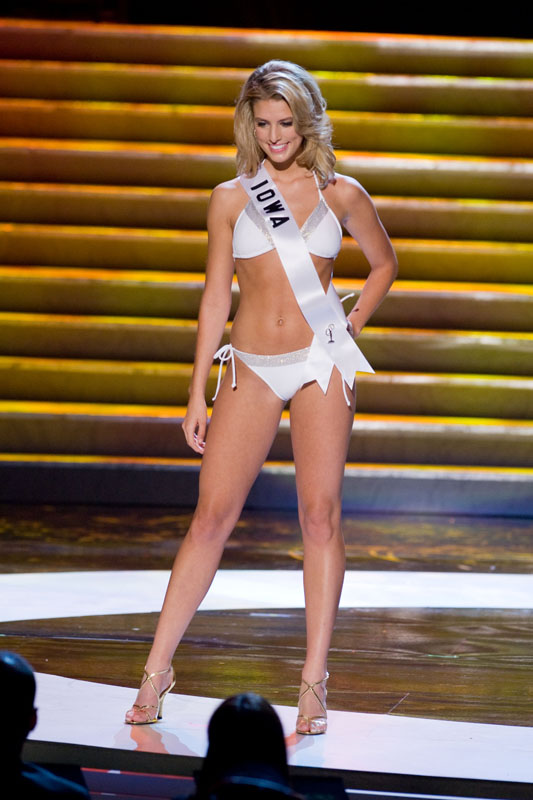 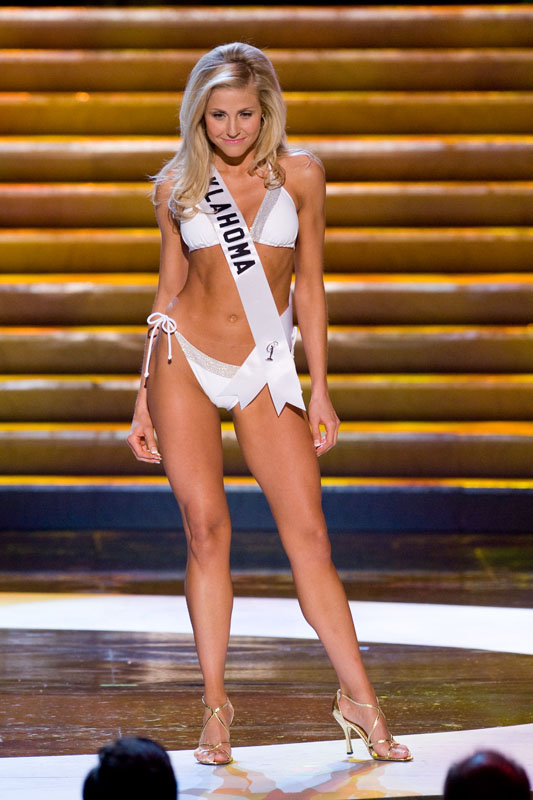 Both Iowa and Oklahoma participate in the Miss America pageant. I'll give you a minute to assess the lighting and proper fit of the swimwear. This is from 2009 and, though obviously a homer pick, I'd have to go with Iowa for the win. yeah... this was a good idea. 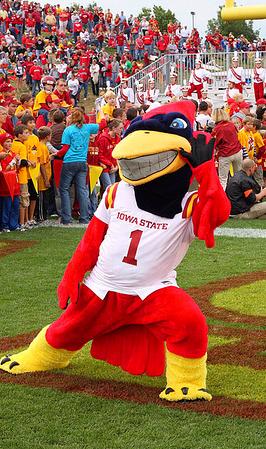 The obvious mascot for a team named the Iowa State Cyclones is a big red bird. The Cyclones mascot "Cy" came about because Cyclones are hard to make in a wearable plush costume. One of the school colors is cardinal red, thus a red cardinal. Cy is famous across the fruited plain for his ability to win mascot challenges involving internet voting - Iowa State also invented the computer, coincidence? I didn't even know I 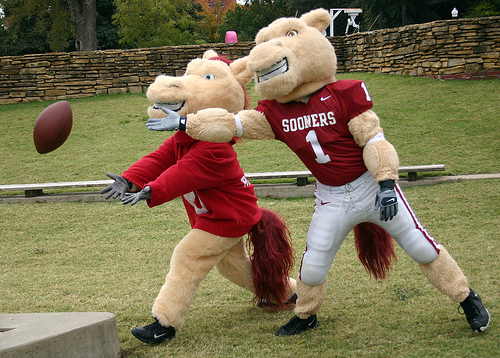 spell that word without spell-check, so yes, probably.

Oklahoma's mascot used to be a wagon, all Oregon trail-style. In a naming effort even more convoluted than the Cyclones one was, they apparently looked for a word that rhymed Sooner picking "Schooner" (over Spooner) ... which is a sort of a bastardized nickname for wagons (called land schooners because of their white tops resembling a sail or some shit like that). Unfortunately, through trial and error it was found a chuckwagon was poorly suited for walking through the stands and entertaining the kids, so recently Oklahoma added two horse mascots ... assumedly the ones that pull the wagon as mascots. Boomer & Sooner are apparently palomino ginger twins one of whom plays football and the other of whom is the "taker". Apologies in advance for not being able to match a name with a growling horsehead face. 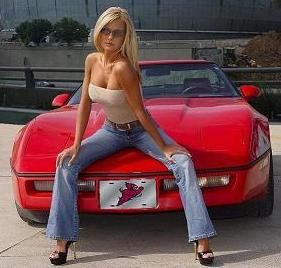 This section took a while to write with all the bathroom breaks. I'm trying to think of something clever here, but the underboob is too goddamn distracting. Something, something, Sooners suck, something about the Cyclones being awesome - aaaand done.

So there you have it - a pictorial guide to the matchup of two actual US states and a couple of their University football teams. You may want to print this out and take it with you to Norman as a reference.