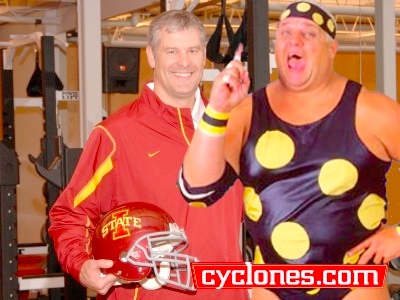 After last weeks beat down at the hands of Utah, Cyclone coach Paul Rhoads spent nearly 15 minutes secluded in his office soul searching as to how he can get his team back on the right track. And anyone who has been in an office alone for that long knows full well that the urge to whack it is nearly irresistible. Rhoads is strong though, and does not succumb to the same perversions that plague the WRNL writing staff. Thoughts of players running the stairs of Jack trice for hours and suicide drills till everyone vomits raced through CPR’s mind. It wasn’t looking good for the players or for coach Rhoads. But then it hit him. Who is the one man who is equally as badass as Paul Rhoads? Who could inspire this team and return them to the greatness that was an above .500 record? None better than his long lost brother Dusty to bring in and motivate the boys.

WRNL could not confirm that they are actually brothers, but it seems legit.

In typical Rhoads fashion, Dusty hit someone coming off the bus. Literally. The Greyhound he arrived in rolled up to the Jacobsen Building early Monday morning and "The American Dream" found himself greeted by one Jaime Pollard: who he swiftly threw into a cross faced chicken wing until the ISU AD cried "Uncle".

The former World Wrestling Federation superstar was later introduced to the team. Sources inside the Athletic Department have reported that he gave a speech so inspirational that it puts his alleged brother Paul’s "I am so proud" locker room celebration to shame. If I were to guess, I’d have to say it most likely paralleled this…

Key talking points (for those of you who cant watch the video for whatever reason):

Wow! That is powerful stuff. I’m sure the team really took that speech to heart. 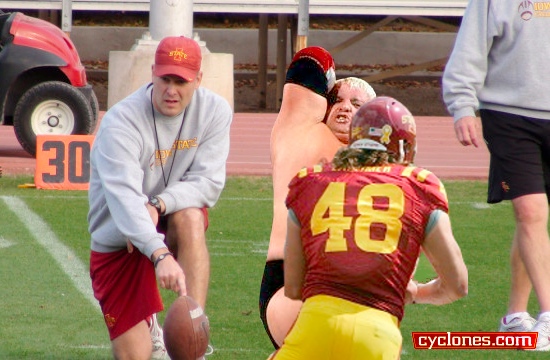 During a closed practice later Monday afternoon, Dusty Rhodes walked the players through what he believes their game has really been lacking up to this point: double arm bars, eye gouges, and bionic elbows. In his words "The key ta winnin’ is beatin yo opponent unmerciful. If ya can use a chair and not get caught, then use a chair. You ain’t got no chairs because they bolted to the ground? Den swing a helmet at somebody, poke em in da eye, really let em know that the whippin they gone get is gone be SHAMEFUL!"

Looks like we know who Miami’s strength and conditioning coach was a few years ago (Miami vs Florida International). Just look at the technique as they swing those helmets, execute body slams, and gouge eyes. If that isn’t Dusty Rhodes coaching, I don’t know what is!

Hopefully the players were able to take what the former wrestler taught them to heart. It’s gonna take a lot of bottom of the pile ball pinches as well as plenty of elbows to the throat, groin, or kidneys to get by OU this week in Norman.

When asked to comment Coach Paul Rhoads stated, "I think you’ll see the difference in our game come Saturday".

We sure hope so coach!