The Godfather's Seed in Trouble

Share All sharing options for: The Godfather's Seed in Trouble

No, Larry Eustachy isn't getting a vasectomy, although that me be just about as pleasant for him at this point in time. The Eustachy name has found its way back into the news once again, however this time it isn't for shotgunning beers and tongue jacking co-eds. 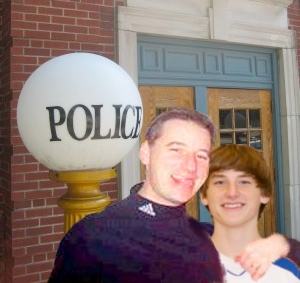 Hayden Eustachy, son to WRNL Godfather and former ISU Men's basketball coach Larry, was arrested this past weekend for attempting to burglarize a vehicle in Ames. After finding out that the heir to the Southern Miss throne was arrested, we here at WRNL found it our duty to investigate further and provide our readers with the most in depth made up details of the situation as possible. And after checking with our sources in Ames, we discovered the following were items in the car that Lil E broke in to:

- A case of Natty Light (still cold)
- A copy of Enya's Greatest Hits
- A new black Adidas mock turtle neck
- A black book with numbers and addresses for Missouri's sororities
- A used copy of Get Out of Your Own Way: Overcoming Self-Defeating Behavior

The GodFather's seed is 1/3 genetics, hair gel, and all that other reproductive bullshit. The other 2/3rds is pure unfiltered Natural light. So this type of behavior from the spawn of his 66% alcohol by volume baby juice is more than expected. Hopefully Hayden learns from this mistake and realizes that if he truly wants to make daddy proud he needs to be getting hammered with co-eds and drunkenly complaining about how bad his team is, not busting into cars. pshhhh - Kids these days...

Although obviously disappointed in the stupidity of the actions of Eustachy Jr, we do have to commend him for choosing against taking the Jillian McCarney route to dealing with law enforcement... "Do you know who my dad is? I guarantee all the charges will be 'dropped' because of my last name and becasue we have 'a lot of money."

Stay tuned to WRNL for more updates to follow as this important story progresses.