Where did it go so wrong for a Nebraska team coming in 6-0 against a Texas team that got demolished by a crappy UCLA team? After their shocking 20-13 loss, Husker fans were left wondering where it all went so wrong. How did Taylor Martinez, the "Future of Nebraska football", perform so poorly that he was pulled for Zac Lee? Perhaps this find by our staff explains quite a bit: 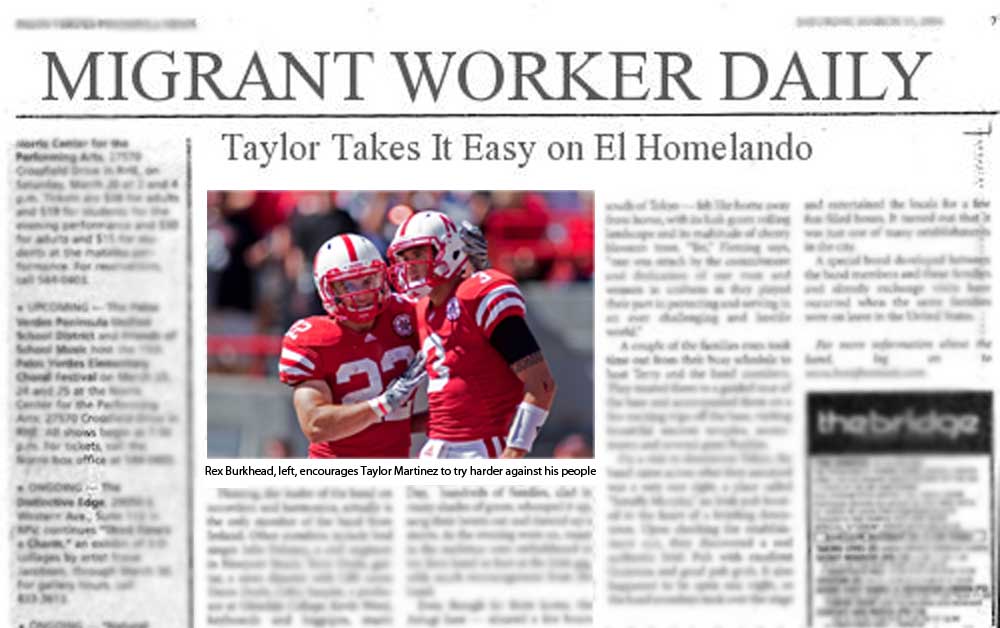 At WRNL we pride ourselves on our top notch investigative journalism, and this is no exception. The moment we heard that a man named "Martinez" coincidentally had to be taken out of a game against Mexican National Futbol Americano club - Texas for lack of effectiveness, we broke out our Spanish-English dictionaries, shaved our faces into cholo pencil beards, and put Taco Bell on speed dial for what was sure to be a long search for answers.

After stopping at multiple Supermarcados, several clothing outlets selling "Dickies", and witnessing way too many donkey shows - we found ourselves getting the exact same answer every time, "Sr. Martinez es un heroe el Estado de Texas. Nunca deshonraria su peublo. Vamos a hacer pinatas muchos su semejanza". According to some crazy dude in a Zorro costume and no pants, who was willing to help us translate, this means "Mr. Martinez is a hero to the state of Texas. He would never dishonor his people. We will make many pinatas in his likeness"... Yea, we were shocked by this too! The whole time we thought they were just calling us white devils and telling us to go fuck ourselves!

This certainly clears up a lot of questions about that game, namely:

Why was Martinez so bad against the Longhorns on Saturday? Viva Texico!

Who the hell in their right mind would put Zac Lee into a football game? The Lees are from Massachusetts, no one ever Vivas anything in New England.

Why do the Pelini brothers go mouth-on-mouth when greeting each other? Its a Husker thing.

So it turns out Nebraska gave last weeks game to Texas in a selfless act of national pride. While some may question the sportsmanship of throwing a collegiate football game, the decision was clear to Taylor - what's one more loss to Texas anyway? Its not like it's the World Cup.