52-0 … that hurts. After getting undressed by the University of Utah the week before, the Cyclone football team was completely dismantled by the Oklahoma Sooners to the tune of 50+ points. And it doesn’t get any better this weekend when the team travels to Austin to take on the University of Texas. On paper the Longhorns are a distant #19 to the single digit rankings of the a #9 Utes and #1 Sooners, but Texas is still Texas and this game figures to be another long day unless significant improvements are seen.

To that end, Cyclone head coach Paul Rhoads has moved practice south a little early this week. San Antoino, Texas is where the team is calling home during game prep and Longhorn walk throughs, more specifically the grounds of the Alamo.

Coach Rhoads explained: "We wanted to get the kids focused and confident, and I feel nothing does that better than practicing on the same location made famous by Texans running away scared". 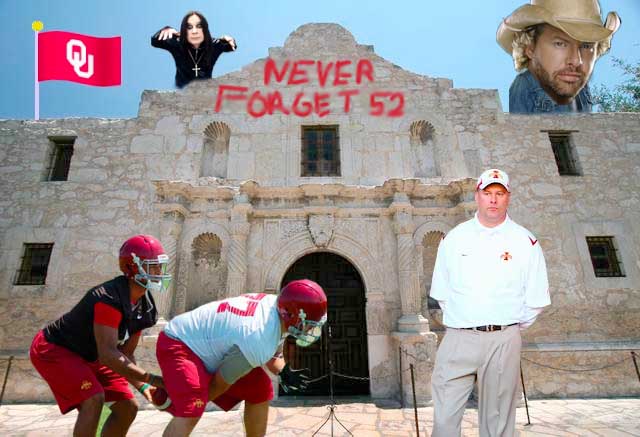 Rhoads continued: "We made a few modifications, put up a couple symbols of Oklahoma to remind us why we're practicing so hard - we never want to feel like that again. I think the giant inflatable Toby Keith was a nice touch. Although I wanted the one with the wacky wavy arms - but budgets are tight."

The coaching staff has also instituted a new rally cry to help unify his players and focus their determination.

"Well, I thought we needed a little something extra this week, and I thought it was appropriate to borrow heavily from Texas history seeing as we’ll be playing there"

All week the Cyclones will be remembering the past to sharpen them for the future. Hanging all about the field are the teams slogan for this week: "REMEMBER THE OKLAHOMO"

And it seems to be working.

"Practice down here has been great, with the minor issue of Ozzy. Unfortunately, Mr. Osbourne has shown up a couple times already and uh.... 'watered the grounds', if you know what I mean. Old man pisses everywhere - we've had to put the Gatorade jugs on lock-down. - yeah, other than Ozzy, great practices."

So it appears Cyclone fans can look forward to a renewed and energized Cyclone team on Saturday as they take on the Texas Longhorns in Austin to close out a brutal three game swing.