Share All sharing options for: 2010 Game 8: Iowa State vs Texas

What a complete and utter ass kicking last week. That one felt 10x worse than the Utah beating did despite it being on the road against a team that was won 33 straight games at home. Really no one expected the Cyclones to win last week but the utter debacle that was Iowa State’s offense was a sight to behold. Similar to a bad car wreck, I could not help myself and kept watching. Oklahoma’s defense ranked 93rd overall in the country in total defense but somehow found their balls during their bye week. What a terrible, terrible time for this to happen.

Iowa State now turns their focus to Texas where they are 0-7 all time but having only played one game prior to the formation of the Big XII in 1996. This is going to be a doozy…

A History: Iowa State vs Texas

What history? They have played six times since the Big XII formed with the only other matchup being a 17-9 Texas victory in 1979.

To be completely honest, that close score in 1999 shocked me enough that I went to Cyclones.com to find the recap here. Read that before you read the rest of the preview. Trust me.

Back it Up: Week 7 Review

Iowa State went down to Oklahoma and got slobberknocked by the now #1 Sooners (in the BCS), 52-0. This was Iowa State’s first shutout since a 45-0 loss to Kansas State on November 8, 2003.

Texas did what anyone who watched the Big XII this year thought they would do and shut down Taylor Martinez to beat Nebraska 20-13. Garrett Gilbert went 4 of 16 passing for 62 yards but added 11 rushes for 71 yards and 2 touchdowns to pace the Longhorns in their victory.

There is not a lot to preview in this section if you have seen either team play at all this year. Iowa State is struggling in all facets of the game and has shown relatively little success on offense since the first quarter against Utah two weeks ago. Texas on the other hand boasts one of the top defenses in the country and has so much speed they will present matchup problems at each and every position. 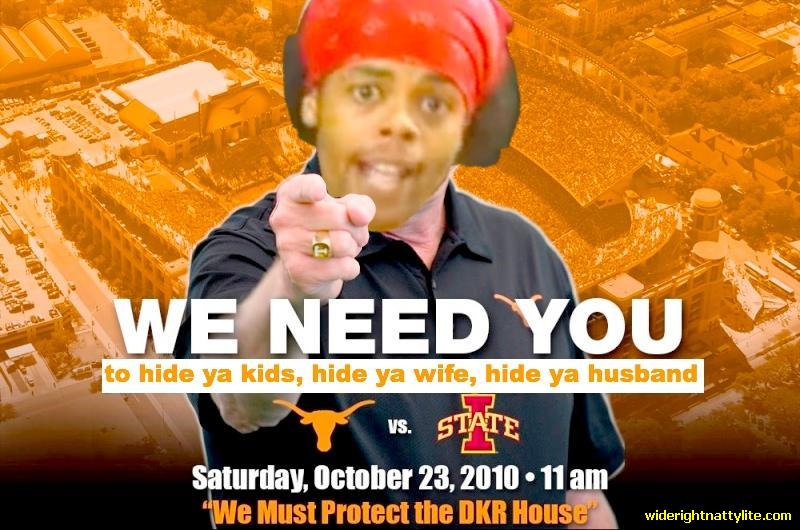 On paper Iowa State should get absolutely housed in this game. I mean taken to the cleaners. This defense is bigger and faster than what the Cyclones saw in Utah and Oklahoma and they have the rankings to back it up. Iowa State has struggled the last two weeks on 3rd down conversions by going only 4 of 26 (all 4 conversions came against Oklahoma). Texas will simply rely on their speed to shut the Iowa State offense down and with predictable play calling you will see the Cyclone offense in more 3rd and 8s or greater than is desirable.

If there was a bright spot for this offense last week it was Austen Arnaud’s 12 of 18 passing for 102 yards and Alexander Robinson's 7 attempts for 39 yards on the ground. Neither number is stellar but Robinson’s 5.6 yards per carry and Arnaud’s 66% completion percentage are those few stats that are "between the lines" that give some form of hope that this offense will click long enough to make this game worth watching. One thing to keep in mind are the chances Texas took last week that could have resulted in big plays for Nebraksa… if Niles Paul and Rex Burkhead had hands that is. Iowa State does not have a legitimate deep threat but it they catch Texas taking chances something good may happen.

Reason: Iowa State’s offensive line has to learn to block somebody. Anybody. Even the ref. Arnaud was running for his life last week and it was direct contributor to the issues getting anything going in the passing game. The same can be said for the running game. Predictable play calling lead to Oklahoma run blitzing on second down and stuffing Robinson more than once. Only on misdirection plays and with a mix of unpredictability did Iowa State gain any significant yardage.

Iowa State has to get the ball out of Arnaud’s hands quicker and spread the field. They have failed to do so the last few weeks and if it is any indication they will do the same tomorrow. Expect a long day for this offense when the play calling becomes pass, run, 3rd down pass. Texas’ defense will feast all day long.

It would be tempting to mail it in on this part of the preview as well if Texas was not so damn inept at passing and running the ball. Their offense has been less than stellar this year and currently ranks 74th in passing yards, 74th in rushing yards, and 78th in points for. They are an average team on offense. They have athletes and no one doubts that Garrett Gilbert will be a legitimate Big XII quarterback in the future but their switch in offensive styles does not favor the personnel they currently have. They do not have a running back capable of running between the tackles and an offensive line that is still built for the spread system they ran under Vince Young and Colt McCoy.

Iowa State’s defense has been absolutely demoralized the last two games and last weekend was beyond rock bottom. Oklahoma’s hurry up offense was snapping the ball before defenders were in their positions and multiple times receivers were uncovered on simple hitch routes because the defensive backs were still moving in to position. Expect Texas to go up tempo as well but their success may be limited as they do not have the history of doing this as Oklahoma does.

Iowa State has to get a lot more physical in the front four before they can hope to shut Texas down but they should be able to contain relatively well and hope for mistakes and opportunities to stop Texas in the red zone. Jacob Lattimer has been given the starting nod at defensive end to hopefully create a spark with this defense and turn the tide of the season. Wall Burnham has done a hell of a job getting these guys in position up until last week so here is hoping that Oklahoma’s fire drill of an offense was an aberration for this defense and people get back in to position against Texas.

Most Intriguing Matchup: Jacob Lattimer vs the whole state of Texas

Reason: He may not have a gun rack on his truck, or a bunch of presidents in his corner, but he has one thing: A crazy fucking mind. Lattimer is balls to the wall 100% of the time and does not quit on plays. I fully expect him to make an immediate impact in the pass rush and possibly rip off one of Gilbert’s arms and use it to club/sack him.

In all seriousness, this could be the surprise matchup of the game. Which gets going first? Texas’ anemic offense or Iowa State’s sieve of a defense. As noted above Wally Burnham has given his defense ample opportunity this year to play in the right positions and last week’s game got out of hand at the first snap of the ball. Expect Burnham to force Texas’ hand early with what they want to do (either pass or try and go smashmouth) and hope for a few turnovers along the way.

Once again Kirby Van Der Kamp just keeps delivering. Three punts inside the 20 last weekend and an average over 50 yards per punt. He still needs to work on his hang time but for a true freshman playing in only his seventh game he has come a long, long way.

Grant Mahoney has hit a bit of a skid these last few weeks and is 0-3 on his last three field goals. To be fair to Grant two were over 50 yards with one a slight miss left and another a complete and utter shank. No doubt he rebounds and expect him to do so this week… if Iowa State can move the ball.

Not a whole lot to say about Texas in this area as they remain pretty consistent. The Longhorns gave up a 95 yard punt return against Nebraska last week on a pooch punt out of the field goal formation. This is likely more of an aberration as those that line up for the field goal do not usually spent much time learning how to defend a punt. Texas kicker Justin Tucker is 11 of 13 on field goals this year with both misses coming from over 40 yards.

Reason: Only advantage here is because Mahoney has missed his last three field goal attempts and had one extra point blocked this year. He is in a rough spot after starting the year strong and playing with confidence. A few field goal opportunities in this game will go a long way to paving the road for the rest of the season.

Games are not played on paper as we learned last week. Looking at last week’s preview I felt that Iowa State could gain yards on Oklahoma (did not happen), control the clock (nope), and keep Oklahoma off balance enough to allow the defense to keep the score somewhat close (failed). On paper this Iowa State team should be absolutely rocked by Texas. We are talking less than 100 yards of total offense and a Texas offense that realizes its potential and hangs 40 on the Cyclones.

Yet… games are not played on paper.

Remember that recap I had you read before reading the rest of the preview? Five paragraphs down you will notice Texas came off another emotional upset of Nebraska right before playing Iowa State. Things like this happen all the time and the Cyclones are guilty of it historically as well. One team gets up for a huge game, wins as the underdog, then just about loses it the very next weekend.

This is an Iowa State team desperate for a win and sick of losing. The team is better than this. The players know it, the coaches know it, and most of the fans know it. Texas is not "Texas" this year. For some reason they are underachieving and if there is ever a time to take Bevo from behind this is it right now. I’m hungry for a win and so is everyone else that follows this program.