BEST WEEKEND EVER! The almighty Texas falls to the bottom dwelling Cyclones? More like the unraveling Longhorns get their asses kicked by the surging Cyclones. That's right, it was an ass kicking in all sense of the word. If it weren't for a change in defensive game-plan to more of a prevent defense when leading 28-6 with 11 minutes to play in the 4th quarter Texas would still be trying to put the Dick in the Pussy (derogatory phrase meaning ball in the endzone.) The ensuing meltdown of Texas fans was just as priceless as the game itself. Everything from crying in their shit stained undies to swearing off Texas and their coaching staff. As cousin Eddie would say....it was real nice. 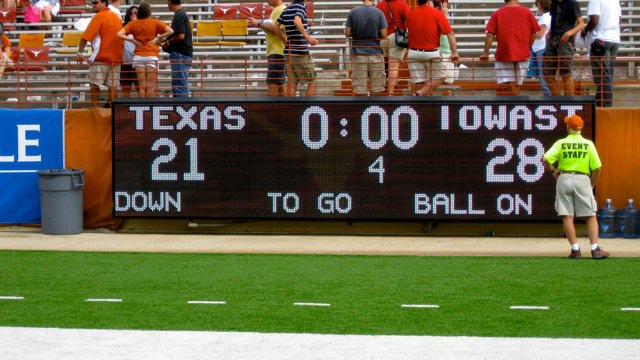 Alexander Robinson, RB - Not sure if you know this but this is the second legitimate helmet sticker ARob is getting after old man Holtz gave Robinson a helmet sticker on national T.V. Now he's getting the even more coveted WRNL helmet sticker, let's face it those college gameday stickers are cheap as shit. This WRNL sticker is the real deal, made of the best materials that will stick on anything including bodily secretions. If Lou Holtz says ARob is deserving of a helmet sticker, who am I to not award him one? Robinson ran at will against the Longhorns racking up 120 yards on 24 carries and 2 touchdowns. All of this against a Texas defense that was ranked 4th in the nation.

Jacob Lattimer, DE - PLACE AT THE TABLE!! That's right, Lattimer gets his first start at defensive end against Texas and puts up surprising numbers for a man that's converting from the linebacker position. His stat line, oh just a measly 7 tackles, 2 sacks, 1 forced fumble and 4 quarterback hurries. His motor was running and it sparked the entire defense. It was amazing seeing what this defense could do when the front four actually applied some pressure.

Defensive Backs - While Michael O'Connell is pictured because of his clutch interception in the endzone, this award goes to the entire defensive back unit. Benton, Reeves, Johnson, Sims, O'Connell, and Sandvig all get a sticker for their hard work on Saturday. Part of their success is certainly due to the pressure caused by the front four but they played their asses off and deserve recognition. Three of them got interceptions, all of them broke up passes and tackled well. Just a solid all around performance by that group of men.

Garrett Gilbert, QB - How fitting the Chizik coin is finally being handed to a Texas player, being that Chizik was hired from the Longhorns by ISU? Gilbert was fucking terrible in this game and it makes me smile. So much for his 5 star recruiting rank and being the next McCoy. While his stat line doesn't look too terrible because of the passing yardage he put up in the 4th quarter during their futile comeback attempt, he gets this coin in hope he continues to perform at such a shitty level that he gets booed by the Texas faithful every time he sets foot on the field.