Share All sharing options for: Big XII Power Rankings - Round 2

Here at WRNL we never let you down, unless of course you have had casual relations with any of the WRNL writing staff, then you have certainly been let down. But to our readers who haven’t yet been prematurely ejaculated on, we always come through. So in keeping up with our commitment of top notch up to the minute Big XII football analysis, we present to you yet another Big XII power ranking. Again we will be using the only rating system that makes any logical sense to us: a twelve pack of Natty Light.

Missourah Tigers: 7-0 (3-0)
There probably weren’t too many folks coming into this year that predicted the Tigers to be the only remaining unbeaten team in the conference after week 8. But like a post-op tranny who doesn’t come clean till 5 minutes after you started tongue jacking him(?), Missourah is surprising people. Their last major test of the season is next week as they travel to Lincoln, NE to take on Mexi-Jesus and the Cornhuskers. If they can come out of the stinking crotch of the Midwest with a win, it’s smooth sailing for the Tigers to the Big XII Championship game for what will most likely be a rematch with the Sooners.

Missourah gets 11 delicious Nattys. They are a huge step up from the Steel Reserve and Schlitz that most Missourians drink

Oklahoma Sooners: 6-1 (2-1)
The Sooners at their best are the class of the conference. The only problem is that they don't seem to be at their best on a consistent basis. If Oklahoma plays like they are capable of for the remainder of the regular season, they'll likely win out and get a shot at redemption against Missouri in the Big XII Championship game. If they play like the team that struggled with Utah State, Air Force, and Cincinatti, then anybody outside of CU left on their schedule has a chance to take them down. We sure wish it would have been one of those off nights two weeks ago when ISU visited Norman, because that beating they laid on the Cyclones was "SHAMEFUL". Oklahoma will represent the Big XII in the Fiesta bowl, which very well might end up being played for the national title once the dust settles around the rest of the NCAA.

The Sooners get 10 Natty Lights. You'll probably have a comfortable enough lead midway through the 1st quarter against CU this week to make cracking open a few of these bad boys perfectly acceptable. 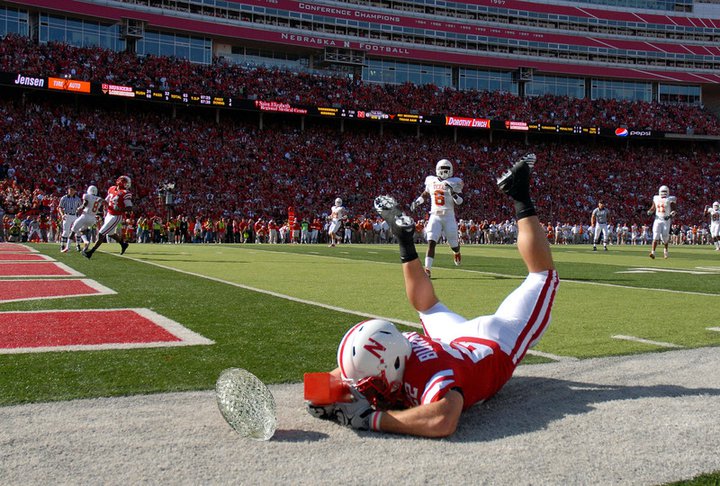 The Huskers are who we thought they were, over hyped and still riding on the coattail of Ndamukong Suh and last years near miss in the big XII championship game. Their loss at home to the first even remotely talented team they played all year (a very mediocre Texas team) illustrates this clearly. Big Red has the easiest schedule in the big XII this year, with it’s only true remaining test being Missouri this weekend. Hopefully though after the Tigers score 40+ in Lincoln on Saturday and leave Husker fans in a state of Nancy Kerrigan… "WHHYYYYYY??" they can then go back to what they were doing before the season started, making sure that every Big 10 fan base is up to date on Nebraska’s history and letting them know how great of fans they are. Man, am I sure going to miss that!

These red faced idiots get 9 Natty’s. But we made sure to shake em up first. Fuck you Nebraska!

Oklahoma State Cowboys: 6-1 (2-1)
The Cowboys are certainly exceeding expectations this year, and in doing so they are putting up points in bunches. Okie Lite is currently outscoring the entire big XII by a huge margin, averaging 48 points per game! Despite losing to Nebraska last week, OSU is still definitely within striking distance of the south division title. And in a year where seemingly anyone can jump up and beat somebody they shouldn't on any given weekend, that isn't a bad place to be at. Despite the Cowboy's on field success, we still have a lot of questions about what's going on with Pistol Pete. If that guy isn't a walking amber alert, then I don't know what is.

The Cowboys receive 8 Nattys. You're Welcome!

Baylor Bears: 6-2 (3-1)
The southern Baptist prayer and dancing in the aisles during church services appears to be doing something. "Hallelujah… Praise tha Lawd!" The Baylor Bears currently sit at 6 wins on the year, making them bowl eligible for the first time since the mid 90’s. Baylor is also leading the Big XII south after week 8. Let me say that again, Baylor is leading the south. Man, I almost feel dirty saying that! Don’t all the tens of you Bear fans get too excited just yet, you have a tough road ahead with Texas, Aggie, and the state of Oklahoma left on the schedule. Look for Baylor to finish up either 7-5 or 6-6 and to make a bowl game. The Bears are getting some love in this ranking from us for leading the south this far into the season, dispite everyone knowing where they'll end up when it's all said and done. Enjoy your 15 minutes in the spotlight Baylor.

The citizens of Waco, TX receive 7 ice cold Natural Lights for their efforts so far this season. Please, drink these instead of the punch served at your next cult gathering.

Kansas State Wildcats: 5-2 (2-2)
Well, you knew it was too good to be true. There was no way that Captain Colonoscopy was going to keep his Wildcats in the drivers seat atop the North division for long. After dropping two of their last three games, K-State is assuming its rightful position in the middle of the pack and hoping not to let the wheels fall completely off. I suppose it was only a matter of time though before teams began to realize that if you stop Daniel Thomas, you stop the Wildcat offense. Look for K-State to drop its next three games, yet still finish up the year 7-5 thanks to the grand finale of a weak schedule that wraps up the season with Colorado and North Texas. The Wildcats are going bowling for the first time since 2006.

K-state gets 6 tasteful and refreshing Natural Lights. Coach Snyder loves him a couple cold ones during reruns of Murder She Wrote, that Angela Landsbury gets him all hot and bothered.

Iowa State Cyclones: 4-4 (2-2)
You give up 120 points in consecutive weeks combined to a bunch of Mormons and Oklahoma, then come back the following week and knock off Texas in Austin. Why must you toy with my emotions like this? Iowa State appears to be headed in the right direction after two extremely poor outings, lets just hope they can build on last week. With four games left on the schedule, two of them being Colorado and Kansas, making a bowl game with one of the toughest regular season schedules in the country appears to be within reach for the Cyclones.

The Cyclones get 5 Nattys. Slam those bad boys, then go out and get ya some easy trim. You just beat Texas!

Oh Texas, you have fallen so far. Gone are the days of ABC camera men hoping for a sideboob shot of Colt McCoy's sister/girlfriend, and here is the weekly stuggle of dealing with losses to ISU, UCLA, and the handful of other "inferior" teams that will likely beat you before the season is over. One year removed from competing for the National Championship and you quite possibly may be playing for bowl eligibility the last few games of the year. Thank God Florida Atlantic is mixed in there! I don't think anybody predicted this, not even the same OU fans that have wet dreams about beating you at virtually anything. You'll reload, that we know for sure, but it's nice to be able to kick you when you're down. And it's also nice not having to hear the poster boy for living with closet Downs Syndrome (Matthew McConaughey) talk about "howwwww-greatttttt-TTTTTTTexas-isssssss" on a regular basis. Fuck that guy, and Fuck Texas.

Texas gets 5 Nattys, one for each of the bandwagoners that'll be left still hanging around come the end of the season.

Texas Tech Red Raiders: 4-3 (2-3)
It appears that Mike Leach took Texas Tech’s winning ways with him. The Red Raiders biggest win of the year so far is over Baylor. Any time you have to say that, you know that things probably aren’t going too well (even if Baylor is leading the South). And to think that this is only a couple years removed from being in the National Championship conversation, ouch! Tech has 3 conference games remaining, then two non-conference cupcakes to round out the season. Look for them to finish 6-6 possibly 7-5 and asking themselves why the hell they ever let Adam James out of the electrical closet.

The Red Raiders get 4 Natty Lights. Drink em real quick, it will make the upcoming games against OU and Missouri easier for you to watch.

Texas A&M Aggies: 4-3 (1-2)
Why are you this bad? Seriously, Baylor is leading the Big XII south and the Aggies are bringing up the caboose, WTF? aTm does not have an impressive win yet on the year and their only conference W is over everybody's slumpbuster KU. In the next 5 weeks the Aggies play OU, Baylor, Nebbie, Texas, and Tech, it’s really hard for me to say that I see two wins in there. Look for aTm to miss the post season this year and for the 12th man’s questions of "Why didn’t the SEC want us" to be answered.

The Ags get 3 Nattys. Maybe let Sherman have them, he’ll probably need something to help him relax with all the calling for his job that will be going on at the end of the year.

Colorado Buffaloes: 3-4 (0-3)
Cody Hawkins Alert! Looks like the coaches son is back under center after starting QB Tyler Hansen underwent surgery on a ruptured spleen. For those of you in central Iowa who don’t know much about Cody Hawkins, this is the equivalent to Todd Lickliter starting "Lil' Lick" last year for the Hawkeye Men’s Basketball team. And I think we all know about how well that one went. Colorado does have Kansas on their schedule yet this year, but outside of that they most likely aren’t winning another game. Maybe they’ll fair a bit better next year when they have a new coach and a new conference, although I kinda doubt it.

CU gets two Nattys, which they will most likely drink, then save the can to use later as a smoking device. "420 bro!"

Kansas Jayhawks: 2-5 (0-3)
KU Fan, just start accepting your fate now. The Jayhawks most likely aren’t going to win another game for the remainder of the year. Next up on your schedule are ISU and CU, games in which any normal year you’d have a good chance at winning. Not this year though. Kansas is a special brand of bad that gives bad teams everywhere something to be thankful for… "Hey, at least we’re not as bad as Kansas, right?" The Jayhawks close out the season with 3 straight games against ranked opponents, you feel like swearing yet Coach Gill? It isn’t going to be pretty in Lawrence come the end of the year, but hey, by then basketball has already started and they’ll be too focused on how to beat Missouri Valley teams in the NCAA tournament to worry about football.

KU gets a half Natty, and since Turner Gill has forbidden them to drink that last ½ we gave them, I guess they have a whole one now.

That concludes the official Big XII power rankings through week 8 of the 2010 football campaign. Look for our last ranking following the conclusion of the regular season which will include bowl previews. KU, aTm, and CU fans might not want to come around for that one, we get mean when we gloat!