Share All sharing options for: 2010 Game 9: Iowa State vs Kansas

Wow, what a ride. Iowa State’s first win against a ranked opponent on the road since defeating Oklahoma in 1990 and their first win over Texas ever. Like most Cyclone fans I was holding my breath in the 4th quarter but between some hardnosed running by Jeff Woody and Jacob Lattimer running around like a man possessed things finally worked in the Cyclones’ favor when Garrett Gilbert sailed his 4th down pass and handed the ball back over to Iowa State’s offense with 22 seconds remaining.

Since Iowa State took over inside Texas’ 10 I really wanted to see another score but beggars can’t be choosers, right?

Now all the focus will be on Iowa State backing up their huge win and playing comfortably with a target painted squarely on their backs. First test, Kansas.

A History: Iowa State vs Kansas

Believe it or not Iowa State has not beaten Kansas since Ellis Hobbs’ game saving interception to preserve a 13-7 win in 2004. Coincidentally, that game was also played in Jack Trice Stadium, during Homecoming, and on October 30th.

Ugly, ugly, ugly is the only thing that really comes to mind here. Iowa State managed to drop a close one in Lawrence last year that resulted in Kansas’ final win of the season and their only win in Big XII conference play. In 2008 Iowa State blew a 20-0 lead at halftime and was forced to rely on an onside kick late in the 4th and a failed 4th down conversion attempt to RJ Sumrall to have a chance to pull the upset.

Back it Up: Week 8 Review

Iowa State beat Texas 28-21 for a historic first ever victory over the Longhorns. Why waste time with text when you can just watch these beautiful videos:

Kansas lost their 3rd game in a row by a score of 45-10 to Texas A&M. The important news out of this game were the injuries to quarterbacks Jordan Webb (shoulder) and Kale Pick (concussion).

Iowa State showed a lot of fight last week against Texas and managed to take it to the #4 ranked defense in the country by mixing up the play calls on the ground. Iowa State amassed 199 yards on the ground with 120 of those going to Alexander Robinson and another 40 going to Austen Arnaud. The passing game clicked just enough (11 of 23 for 136 yards but two touchdowns) to keep the Texas defense honest. 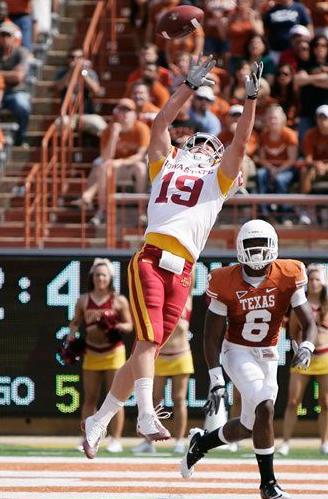 I am not going to spend much time going over the nuts and bolts on how Iowa State’s offense finally woke up but rather turn it over to Ben Bruns instead. Find his incredibly insightful column on CycloneFanatic here.

Kansas’ defense has been nowhere close to stellar this year and has allowed an average of 33.9 points per game, which ranks 103rd nationally. Their opponent has scored over 30 points in all but three games this year. Of those three games where the opponent scores less than 30 points the Jayhawks are 2-1 with a loss to North Dakota State and wins over Georgia Tech and New Mexico State. The combined records of those two schools is 6-9, with 5 of those wins belonging to Georgia Tech.

Overall the Kansas defense ranks 91st in total defense and allows an average of 411 yards per game. Most of those yards allowed are on the ground (207 per game) so expect Iowa State to mix in a healthy dose of Robinson and Woody to wear the Kansas defense down.

In past weeks I have stated Iowa State needs to go to the screen game to spread the field and pull defenders out of the box. They did this successfully a few times against Texas and expect them to go the well again if Kansas comes out early with eight men inside the box. One nice surprise last weekend were the number of underneath routes that Iowa State ran and this included the first touchdown pass from Arnaud to Money Reynolds. Those plays set up natural picks on the defenders and assist our playmakers like Reynolds and Franklin in getting into space. Expect to see more of those as the season goes on. Hopefully with less pass interference calls…

Reason: Kansas has yet to successfully stop anyone this year that has had a pulse. Iowa State showed last week that they have more tricks up their sleeves than the basic read option that leaves the DE unblocked. Hopefully this translates on to the field and Iowa State can have consistent success in the run game, which will set up the play action when needed.

Kansas has been salty in their pass defense so expect an early dose of Robinson and short passes by Arnaud to get the Kansas defense off its game.

Don’t feel bad if you have this sinking feeling regarding Kansas starting their 3rd string quarterback who has attempted only one pass in Division I football. Iowa State has made stars out of backup quarterbacks like Chase Daniel. Junior College transfer Quinn Meacham will start for the Jayhawks this Saturday for his first ever collegiate start. One reason not to take Meacham lightly, he threw for 3,901 yards and 40 touchdowns last season when playing for Snow Community College in Utah. Another reason? Jerome Tiller started his first ever game on the road in Lincoln, Nebraska and helped Iowa State pull the upset over Nebraska 9-7 last year. No one is saying Tiller won that game by himself, or Meacham will win this one, but strange things do happen.

Kansas is not terribly strong on offense as they rank 83rd overall in passing yards and 69th overall in rushing. They have suspended both D.J. Beshears and DeShaun Sands for this game but still have leading rusher James Sims to lean on.

Iowa State’s defense played out of their mind last week with the exception of a 10 minute stretch in the 4th quarter. Even then dropped interceptions allowed Texas to continue their drives and eventually catch Iowa State in a blown coverage on a touchdown pass and another blown coverage that eventually led to Texas’ 3rd touchdown and cut the score down to 28-21.

The biggest change to the Cyclones’ defense last week was the addition of Jacob Lattimer and the three man rotation at defensive end of Lattimer, Patrick Neal, and Roosevelt Maggitt. Keeping the ends fresh along with Lattimer’s energy allowed Iowa State to pressure the quarterback more times in one game than they had in all games combined prior to Texas.

This game will come down to will and whether or not the Iowa State defensive line plays as well this week as they did last week. Kansas will rely on their run game just like they have all year, and probably more so with an inexperienced quarterback starting his first game on the road. Meacham does have an arm so expect Kansas to run to set up the play action. Iowa State will need more discipline than they showed late in the game against Texas to keep Kansas from putting up points and making this one dangerously close.

Reason: Believe it or not this one comes down to experience. While Meacham has played for two years prior to coming to Kansas his competition was never at the level of a Big XII team. One has to think that there is a reason he was buried on the depth chart at 3rd string and hopefully Wally Burnham and company find a way to exploit that.

The key will be how the Iowa State linebackers play in run support and their reaction to the subsequent play action pass. Meacham apparently has some form of arm otherwise he would not be playing for a BCS conference school so if the running game has any kind of success Iowa State will be susceptible to the play action. Iowa State must be disciplined and fill the passing lanes to keep Meacham from being the next backup quarterback star to shred Iowa State.

Iowa State’s special teams came up huge last week again with Grant Mahoney nailing all four extra point attempts, putting the ball down by the goal line on his kicks, and executing a picture perfect surprise onside kick after Iowa State took a 14-3 lead in the 2nd quarter.

Kirby Van Der Kamp has played himself on to the Ray Guy Award list and currently leads the Big XII with 12 punts of at least 50 yards and 11 punts downed inside the opponent’s 20-yard line. This includes a 74 yard kick that was downed on Texas’ 2-yard line that helped Iowa State hold on to their field position advantage early in the game.

Jacob Branstetter, who has kicked for Kansas since 2008, has not shown marked improvement yet this year. Coming in to the season he was 22 of 31 on field goals in his career and has only hit on 3 of 6 attempts so far in 2010. However, all three misses came at a range of greater than 40 yards. The same distance that Mahoney has had issue with so far this year.

Reason: This kid has been lights out for the Cyclones this year, especially on the road. Van Der Kamp has struggled to kick at Jack Trice with many of his punts not achieving the desired hang time and wobbling once they get high enough in the air to get taken by the swirling winds. For Van Der Kamp to truly be a weapon he will need to learn how to kick consistently in Jack Trice like Troy Blankenship and Mike Brandtner before him. Hopefully a nice day like Saturday will afford him just that opportunity.

Count me in the crowd that feels this game is not the two or three touchdown blowout that the Vegas lines have it at and most the pundits feel it will be. Kansas is not bottom of the barrel terrible but they are not consistent either. Iowa State is not great but they are barely good. This is one of those games that if a team comes out motivated, gets a few breaks along the way, and holds on then they will win it.

We have seen it with our own very eyes that a supremely motivated team can upset one that is more talented. We even saw it happen last weekend. 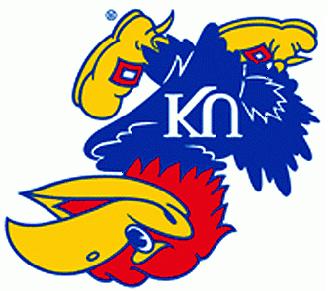 However, I feel that this coaching staff has made it abundantly clear to the players that this game is the most important game of the year. And not like each week is the most important but rather if we do not beat Kansas then we have to pull something out of our ass to even go to a bowl at the end of the year. Kansas is a must win for bowl hopes, a must win to keep building the program, and a must win for the confidence of both this staff and these players.

Iowa State will come in to the game tomorrow with a target on their backs, and Kansas will be ready to leave Jack Trice with their sixth straight win in the series, but Iowa State has shown they know how to execute in pressure packed situations. Expect a close and tense game for most of the afternoon but the good guys, like England, will prevail.