Can you taste that Cyclone fans? No, not the salty left over semen, but the refreshing taste of our team showing up and taking care of business. Although, getting that man juice out of your mouth is difficult, so if that's all you can taste I'll let it slide. Can you remember a game that was as exciting to watch as the game against Texas Tech on Saturday night? I left The Trice beaming from ear to ear for the first time in a long time and damn it was orgasmic. Finally, a shootout we are actually able to get the W in. Both teams amassed 949 total offensive yards (Iowa State 441, Texas Tech 508), and 90 total points. The last time Iowa State scored over 50 points was in 2002 against the powerhouse that is Middle Tennessee State with a 58-6 blowout. The last time Iowa State scored over 50 points in Big 12 conference play was.....well.....never. The last time Iowa State returned a kickoff for a touchdown was in 1994 when a man named Troy Davis returned a kick to the house. The last time, and only time, Iowa State beat Texas Tech was in 2002 when Seneca Wallace broke "The Run." The last time I jizzed in my pants...10 seconds ago, after reading through this paragraph. On to the awards! 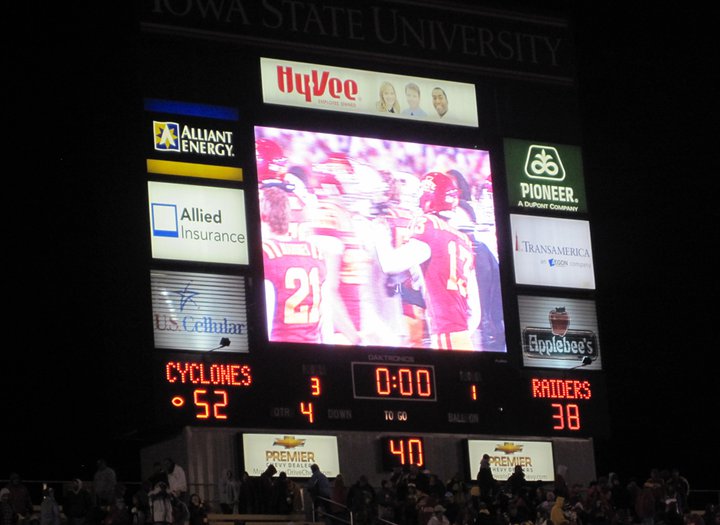 Austen Arnaud, QB - It may be hard to believe, but this is the first time Austen Arnaud has been awarded a helmet sticker from WRNL. You would think being the quarterback of a spread offense team he would have gotten one in the past 4 weeks. That's neither here nor there though because the man is getting his for his performance against Texas Tech. After playing only 1 series in the previous week's game against UNI, Arnaud came back from the dead and proved why he is a captain and leader of this team. Arnaud went 20-28 (71% completion percentage) for 190 yards and 3 touchdowns. Most importantly he didn't turn the ball over at all and honestly only threw the ball poorly once at the very beginning of the game, when Tom Herman undoubtedly gave him a verbal lashing he hasn't had since his last sexual encounter with a freaky female. Here's to hoping this isn't a one time performance and the trend continues throughout the remainder of the season.

Ter'ran Benton, DB - BOOM!! That's to say Ter'ran Benton lowered the boom on some unsuspecting Raiders Saturday night. Really, the entire defensive unit was on top their game but amidst my drunken haze I distinctly remember saying/hearing Benton's name a lot throughout the game. Benton racked up 8 total tackles (1 tackle for loss) and a fumble recovery on his way to becoming the defensive player of the game as far as WRNL is concerned. I can't say enough about him, and the Cyclone defensive secondary, and to think, most of them return for another year after this one.

Shontrelle Johnson, RB - If you don't feel a little more comfortable with the future at RB after A-Rob leaves us then I question your intellect. Shontrelle Johnson is and will be a special part to this offense for years to come. Obviously we've all see or heard about his 61 yard touchdown run when he broke away from the pack and turned on the after burners but did you notice how shifty he is when finding holes and making men miss? He can make cuts most men would tear an ACL when trying to attempt. Shontrelle gained 102 yards on 12 carries and a touchdown for his first ever 100 yard rushing game at the collegiate level. He's elusive, small, shifty, and fast, exactly what the prototypical spread offense halfback should be. Plus, when teamed up with Jeff Woody in the backfield we have two phallically named running backs in Woody and Johnson, that's just special.

Tommy Tuberville - Many predicted it'd be a rough road for Tuberville when replacing the man that locked little boys in a dark closet but Tech fans were starting to call for Tommy's head after week 3. After a loss to the "lowly" Cyclones an increase in the suicide rate has been reported in the Lubbock area. Tuberville has already begun his search for new real estate. Possible destinations for a better life are Haiti, Bosnia, Somalia, and Afghanistan. Seriously, you should check out the hate some of these Texas Tech fans are spewing on their message board. I get the feeling Tubs won't last much longer if he doesn't turn that sinking ship around.