In order to get a better feel for the opposition this week, as well as fulfill our life long dream of becoming reality TV stars, WRNL recently went to Missouri in order to record our own "True Life" episode. We didn’t have a video camera, mostly because our budget went to shit once we realized that booze was super cheap and you could drink it in the car, but we took detailed notes with a sharpie on an empty pizza box of what went down. We will hopefully be submitting our story to MTV sometime in the near future. We’re gonna be rich Buuuuuyatch! 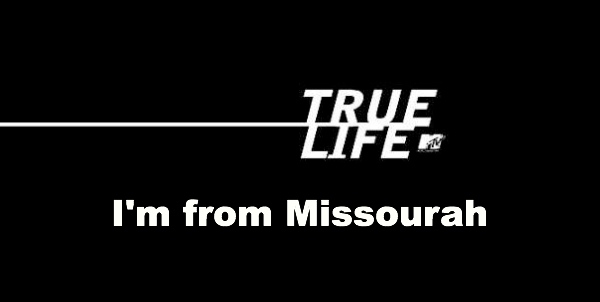 WRNL went to 3 different towns in Missouri to interview actual Missourah-ans about what life in the "Show me" state is really like.

The WRNL team found ourselves in the ER in Columbia, Missouri due to what we’ll just call "a glory hole mishap". While there we talked with one of the ER nurses. She had moved to the state for college and was interning at a local hospital. We asked her what the craziest thing she’d ever seen since coming to the state of Missouri:

"One night a 400+ pound hick bitch came into the Emergency Room PREGNANT! Everyone was kind of looking around like "What the fuck?? How does this woman even have sex, and who the hell is willing too? Ughhh…" Apparently the extremely large lady sensed everyone’s confusion because she was like... "I bet you are all wondering how I got pregnant? My dad and brother really wanted me to have a kid, so they used a large 2x4 and held my flap back while my boyfriend (tiny Mexican guy) went to town on me."

We know what you’re probably thinking… Yes, we immediately regretted asking this question. However the mental picture has done wonders for all of our libidos!

Once you go big, you won't go back - the lovin that only fattys can give

Krista plans on moving out of the state of Missouri ASAP for reasons believed to be associated with the story she shared with WRNL.

No trip to Missouri is complete without a stop in Branson. This is where we met "Daryl", a gift shop attendant who claimed he was a descendant of Cochise. Despite his clear redneck demeaner and looking not even remotely native american, he seemed legit. After all, he did have a dream catcher hanging from the rear view mirror of his ’71 Ford Ranchero, and either that or being a card dealer at a casino, is more than enough to convince us that you’re an Injun.

Daryl, who asked to be referred to by his Indian name "Little Red Bear", walked us through a day in his life. 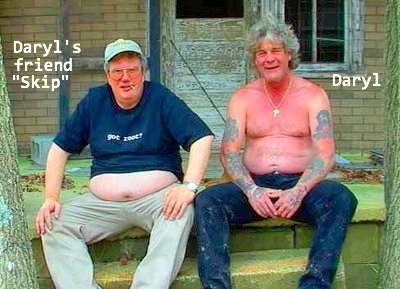 "Well, if it was up to me boys I would'nt do no workin’. But I keep drinkin’ all the drinkin’ money and these arrowheads I made up aren’t going to sell themselves".

Daryl’s gift shop also sold a fine collection of T-shirts depicting wolves, buffalo, and guys with feather hats along with many other "artifacts" he had found, stole, or was attempting to pass off as legitimate.

"I hope to retire to a nice Indian reservation some time soon. I really enjoy blackjack and Old Crow Whisky. But until then I’m just selling the gifts of my ancestors…"

Daryl sleeps in a "Tee pee" behind the gift shop his friend and confidant "Skip". Much of his free time is spents passed out and urinating on himself or working towards this.

Like most residents of Southern Missouri, Daryl doesnt stand much of a chance of climbing the socioeconomic ladder. He doesn't seem to mind though, as long as the "drinkin' money" doesn't run out.

On our way back to Iowa the Windowless WRNL panel van needed some refuiling and an oil change. Who better to do this than the caring folks at the local Walmart? Enter, St. Joseph Missouri.

While having our van serviced, we met a fine gentleman name "Ronnie", a life long resident of St. Joseph.

"We'll get this fancy van here all fixed up fellers. we'll have ya out of here right quick in the jiffy"

Ronnie is a celebrity in the state f Missouri. He is famous for regularly making appearances on police reality shows and once had a small budget movie made about his run ins with the law. Here's a clip: 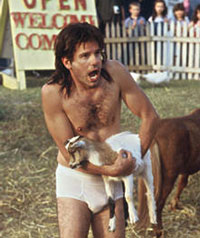 "They made a movie about my life. Yes, I'm kind of a big deal, but I dont let that go to my head. That's why I still work here changin' up the oils. Well, that and I spent all my money on NASCAR tickets, I went to every race for 3 years straight. I even met Terry Labonte. No lie. I bought a '88 Trans Am. Man, that mother fucker was fast, until I wrecked it. and I bought a life time supply of Pallmall cigarettes. They're getting kinda stale, but they're still good. Really, I'm livin' the dream. This is the Missourah dream right here!"

Like many Missouri residents, Ronnie appears satisfied with what he has. Most know nothing of what life is like outside the confines of their state where people are free from incestual relations, mullets, and the trials and tribulations of the trailer court.

Guys like Ronnie are a dime a dozen throughout the state. Friends of his told WNRL before we left that he has aspirations of running for Governer.

During our time in the state of Missouri, WRNL was able to interact with the locals, confirm most every stereotype we could think of, and drink a ton of cheap booze. We were also able to gain an understanding of why they call it the "Show me" state: obviously this is due in part to 2/3rds of the population struggling with reading comprehension and needing to be shown detailed pictures in order to achieve any type of understanding.

We are yet to hear back from MTV about whether or no they will be airing our episode. Stay tuned