How to Deal With Nebraska Fans

Share All sharing options for: How to Deal With Nebraska Fans

Hide yo kids Nebraska because WRNL won't be as kind as we were to Kansas. We start Nebraska week off with another guest submission from Balken, who again pens an excellent look at how to deal with one of the most delirious fan bases in all of sports.

I am asked several questions on a regular basis. For example, "Balken, do you prefer Summer's Eve or Massengill?" Or, "Balken, you said you were clean, why do I have crabs?" And most frequently, "Balken, could you provide a psychoanalysis of Cornhusker fans and provide some effective tactics do deal with their impending presence in Ames?" There are easy answers to each of these queries:

1. Summer's Eve, especially if you can obtain the special edition with Egyptian musk scent. However, don't forget about the trusty FDS.
2. While easily explained, due to additional complicating matters I must withhold comment on the advice of my attorney.
3. Absolutely. Please, read on.

Our neighbors to the west have a rich tradition, based mostly on obnoxious behavior, delusional thinking and an overwrought sense of self-importance that would make James Cameron blush. Today, we will highlight a couple of the main attributes of the Cornhusker fan and provide some ideas to mitigate the pain of dealing with them this weekend and throughout the year. 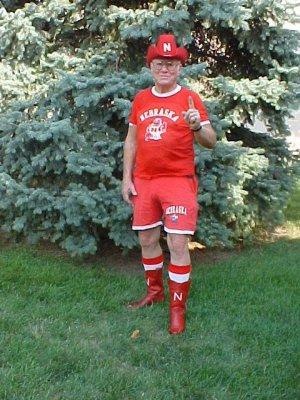 As those experienced with Huskers fans will probably recognize, this is unlikely to be effective. However, much like trying attempting to kill the crabs with various household chemicals to avoid being seen buying Rid and a small comb at the drugstore, you may feel compelled to begin with some logic. Point out that NU is 1-10 versus Texas since inception of the Big 12. Mention that they are 4-4 in the last eight versus Mizzou. Even throw out the bomb that they have barely managed a winning record (5-3) against lowly Iowa State in the last eight meetings. This will likely lead to a conversation about tradition, past national championships and the greatness of Tom Osborne. Additionally, prepare for a comment about how Iowa State is fortunate that they even have had the opportunity to play NU each year. Also, prepare Cro-Magnon language skills and "I know you are but what am I" style comebacks.

Because you have not yet purchased the Rid to kill those pesky crabs, pull a Rico Suave move on his girlfriend while you distract the Husker fan with a mention of a Mike Rozier sighting down the street. However, to complete this maneuver I suggest you bring a paper bag, a bottle of your favorite liquor and penicillin as she may return the favor with some biological weapons of her own.

While this may seem similar to the arrogance trait we just discussed, it has a slightly different manifestation in the Husker fan. In their mind, anything associated with NU football is of greater quality and superior sophistication. This explains why Husker fans will make fun of the Cy as a mascot, even though they are represented by what appears to be a swishy, 1950s farmer named Herbie. However, this trait is most generally expressed in the excessive display of NU paraphernalia, such as red, NU scrotum warmers for their dogs.

Rather than accept the premise that Husker fan has any ground upon which to stand, you can try to point out their obvious deficiencies. Texas, OU and CU run dirty programs, they say? Always a good time to trot out convicted felon Lawrence Phillips. Most tradition-rich program, they spout? Ask them how the Callahan years treated them. Source of some the game's greatest players, like Gill, Remington, Frazier and the like? Point out the woody in their pants thinking about said players.

Better Strategy: Uncover the Source of the Behavior

Rather than fight the unwinnable battle of reason with the Husker fan it is better to get right to the source of the behavior. Ask them some questions about their love life. Find out if they like to watch "Sex and the City" or "The View." Mention how dreamy Kirk Herbsteit looked on College Gameday last week. When you think you have softened him up, mention that you just saw a shirtless Scott Frost in the tailgating area. At this point, you should be prepared for either an "American Beauty" type breakdown with you on the receiving end of a tongue -in-mouth maneuver, or be ready to be run over by the NU fan as he dashes off to find Mr. Frost with his already-exposed genitalia in hand. In either case, releasing the repressive behavior will leave you free to deal with the seven remaining Natty Lights in your cooler.