The University of Iowa men's basketball program already had a tough road ahead due to a multitude of losing seasons and dwindling fan support, but it appears that the road may get tougher yet. Last week University officials "self-reported" that recruiting violations had occurred with prospective members of the basketball recruiting class. Several recruits were allowed to meet and talk with Hawkeye booster and star of MTV’s "Punk’d", Ashton Kutcher along with his wife Demi Moore. Athletic director Gary Barta said in a prepared statement that he expected the NCAA to be lenient and that "In each case, Iowa staff and administrators thoroughly investigated the activity and they have already educated all involved on what to do differently to rectify the problem in the future, namely that the recruits should quit being little snitches on that damn Facebook." 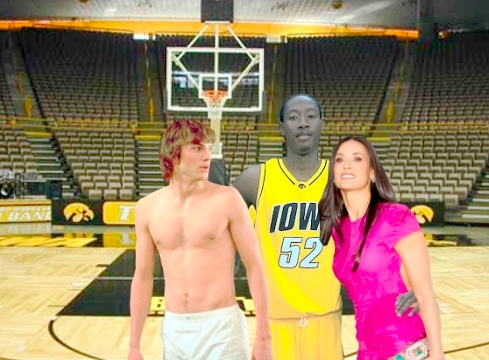 The NCAA ruled on the case early this morning with a stiff penalty, at odds with Barta’s prediction. In this report the NCAA committee said: "A head coach and athletic department do not promote compliance when they intentionally ignore rules of the recruitment process. This is especially true when an athletic department knowingly uses annoyingly arrogant wannabe alumnus in an attempt to persuade impressionable youth. The destruction of comedy Mr. Kutcher has promoted with his career makes these violations especially worrisome." The ruling continued: "Therefore, the NCAA mandates that all Iowa basketball recruits will be required to spend at least 2 hours with Ashton Kutcher prior to signing with the program through the class of 2015."

It is assumed that this will likely be more detrimental to the University of Iowa Basketball program than allowing John Lickliter to not only remain on the team, but play.

The final blow handed down by the NCAA was that the Iowa Men's Basketball Program will be required to have 3 separate "Sideways Trucker Hat" giveaways during the 2010-2011 basketball season in which the first 10,000 fans through the Carver Hawkeye Arena doors will receive and must proudly display the trucker hats. The University has voiced concern over their lack of ideas on what to do with the estimated 8,000 remaining hats that will be left over after each of these games. U of I Athletic Director Gary Barta stated, "I suppose we could give 10,000 hats to 2,000 people, everyone gets 5? But what is one to do with 5 trucker hats that must be worn at a 45 degree angle? We are very troubled by this ruling."

It appears the NCAA is trying to make an example out of the Hawkeyes. And for the tens of fans that support the program, it will require deligence and patience to stand by the program as they attempt to rebound from this unfortunate ordeal.

"This is not a good situation," head coach Fran McCaffery commented. "This is usually the part where the Punk’d cameras and Ashton comes running out – but there's no cameras, no sighs of relief, and no one's laughing. Why is no one laughing?"