The Pelini Tantrum: Is It The Latest Craze Amongst Nebraskans?

Share All sharing options for: The Pelini Tantrum: Is It The Latest Craze Amongst Nebraskans?

When Jamie Vanderbeken's buzzer beater caught nothing but net on Sunday against Creighton, the Cyclone faithful erupted in celebration. Creighton fans on the other hand, well, they weren't nearly as excited as us and responded a little differently... 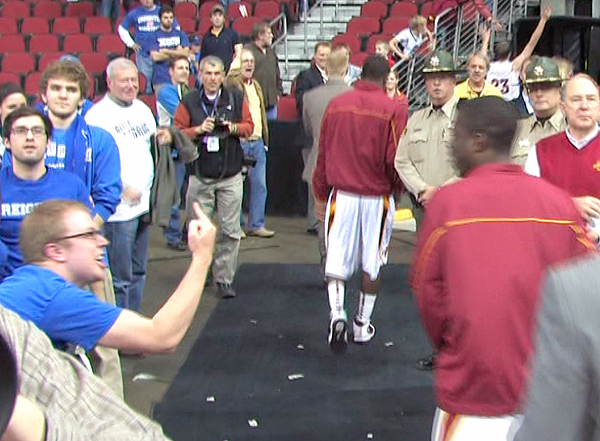 Clearly the natural response to a loss, or something that doesn't go your way, for folks from Nebraska is childish outbursts that include screaming obscenities at anyone within ear shot, rosebudding your undershorts, and tantrum like behavior that rivals a child in a grocery store being told "For the last time, we aren't getting Koala Yummies today!". And Creighton fans did just that. In the same fashion displayed the previous night on national television by the Pelini brothers, Carl and Bo, Creighton fans lost it.

As pictured above, Chase Flendersen, Sophomore in leisure studies at Creighton, goes all out with his tantrum like behavior by showing the Cyclone team the same finger that he used to diddle himself for the entire 2 hour car ride from Omaha to Des Moines. You might recall Bo Pelini poking quarterback Taylor "MexiJesus" Martinez in the chest on the sideline of the the NU-A&M game on Saturday, also with the "diddling finger".

WRNL has found exclusive footage of what a Pelini style Nebraskan melt down actually looks like. We share this with you only to educate you on our neighbors to the west, and maybe to help in understanding just why they were unable to control themselves after the Creighton loss to ISU.

Shockingly, no one, not even Matt Perrault, attempted to penetrate themselves with a remote after the Creighton loss at Wells Fargo.