Nebraska Athletic Director and football baby Jesus "Tom 'Antoine' Dodsborne" has a message for Ames, Iowa and for any Cyclone fans coming to town for this weekends game: "You better watch your backside", because he [Herbie Husker] could quite possibly rape "Errbody" up in there. Like a vigilante Frankenstein with an unquenchable thirst for 8 year old heinie, Herbie is "Runnin' wild".

Dodsborne was quoted as saying, "We're bringing Herbie with us this weekend despite it being against our better judgment. It's a relatively close game and he doesn't get out much. We've been told that ISU's football stadium is outside of Herbie's court mandated 2000 foot radius from any schools, parks, or Chucky Cheese's. Unfortunately we have not sacrificed a single virgin to him in over a month, and he appears to have misplaced his favorite Justin Bieber cassette tape. Our best guess is that he will be as determined as ever to find himself an unsuspecting sphincter." 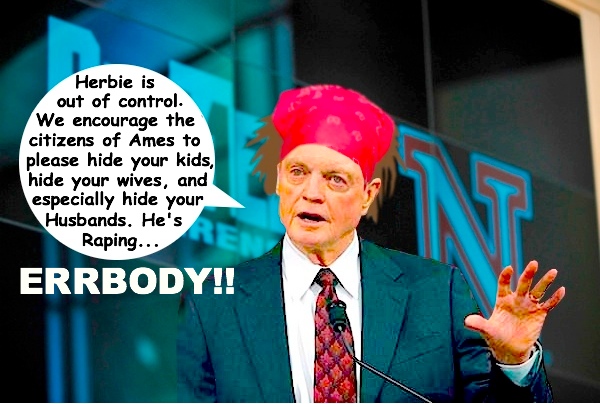 WRNL strongly encourages its readers to take every precaution possible this weekend with Herbie Husker in town. And do not allow yourself to be fooled, for not only is he a creeper, but as you can see in the photo below Herbie is a master of disguise; able to blend in with his surroundings. The fact he's a giant perverted chameleon makes the Blitzkrieg style of abductions and penetrations the method of choice for Herbie. 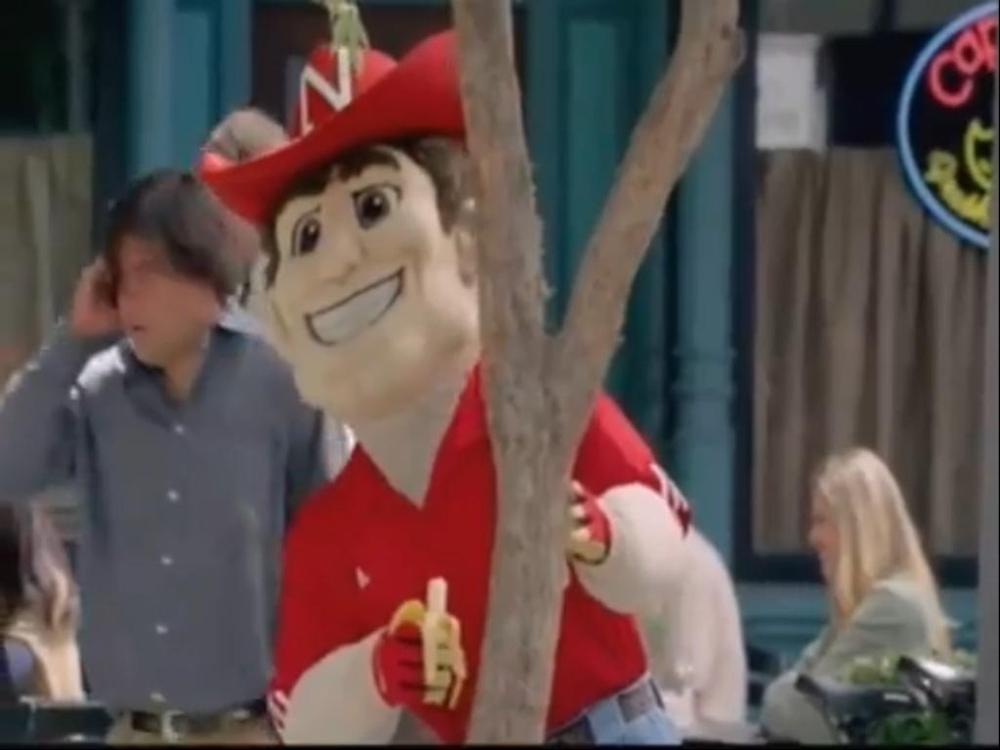 In a perfect world, mascots are supposed to be energetic fuzzy characters that children can love and be entertained by at sporting events. However, certain universities seem to have missed the mark completely and have inadvertently given us some of the most disturbing things imaginable. The Big XII conference appears to be a gathering place for several mascots that creep the shit out of people.

However no matter how ridiculous any of these characters might be, there is one that always seems to stand out above the rest: Herbie Husker.

With Herbie in town this weekend we decided it was important to help our readers avoid an uncomfortable confrontation. We have provided the following list of Dos & Don'ts for your protection:

- Do scream "FIRE!" and not the outdated "Help": It has been shown to be more effective at rallying others to act on your behalf - and you better hope they do something quickly before your 'behalf' is acted upon. Other variations include: "Cops!" if standersby appear to be underage drinkers or "Godzilla!" if your tailgate is heavily Asian.

- Do enter your car from the passenger door: If you are parked next to a big van (particularly like the one pictured above)

- Do invite someone slower or fatter than you to your tailgate: This should be self explanatory.

- Do carry a whistle: Do not, however, carry a Vuvuzela as it is very tempting to beer bong out of. Also that shit is annoying, so possible assisting parties will be more inclined to move further away.

- Do not pee in the woods: Herbie likes the ambiance of the woods for his "discretions".

These are only tips that we believe may be beneficial to our readers in case of an emergency. If you are in fact attacked and/or raped by Herbie Husker this weekend and these methods fail to deter the fuzzy predator but actually encourages him, WRNL is in no way liable.

Be safe out there.