Sure, There Are No Drug Problems At Iowa, We Promise!

Share All sharing options for: Sure, There Are No Drug Problems At Iowa, We Promise!

The University of Iowa Athletic department held a press conference this morning to discuss recent events surrounding the Iowa football program and rumors of rampant drug use following the arrest and release of wide receiver Derrell Johnson-Koulianos.

While WRNL was not allowed media credentials for today's press conference, we were able to obtain the following images of head coach Kirk Ferentz and Iowa AD Gary Barta. 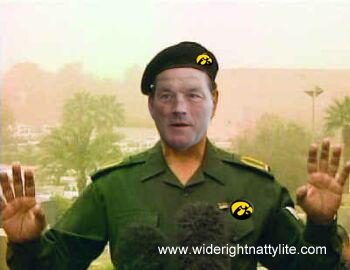 We're not positive, but we think the transcript of the press conference probably reads something like this:

"There is nothing to see here, we don't even know how to spell cocaine, the program is fine, some people are doing other things for totally unrelated problems and there is nothing going on."