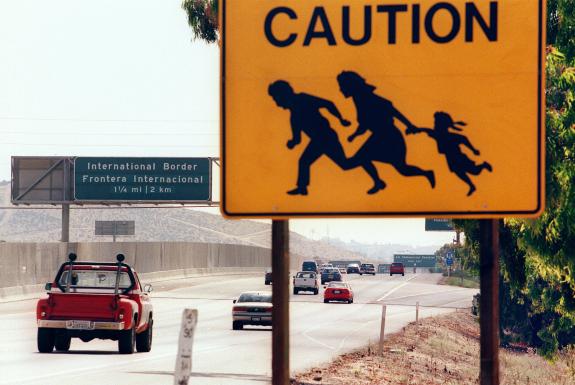 As America continues to struggle with the problem of illegal immigration and migrant workers, a surprising twist has shown college basketball is not immune to this hot button issue either.

For years, European players have fled the fanatical futbol sentiments of their home lands and found success in college basketball programs across the country. For the most part, these athletes have acclimated well to American basketball. Only in rare circumstances have we seen these athletes turn out to be colossal douche bags (read: Lucca Staiger).

So it would seem understandable that our mustachioed neighbors to the South would notice this trend, and encourage some of their own native sons to lay down the bean picking and pursue dreams of becoming Division-1 basketball players. Initially, there was little to no opposition when it came to accepting Mexican athletes in America. After all, they were willing to play for reduced scholarships and there were even a couple success stories in the form of hardwood talents like Horatio Llamas and Eduardo Najera.

But as more and more of these vaqueros emigrated north, tension began to build, and especially in Southern states, the receptions became less cordial and increasingly controversial.

A high ranking official in the Auburn athletics department, who spoke on the condition of anonymity, informed WRNL that it was simply good business to recruit Mexican basketball players.

"Everybody has a bottom line," the source said. "Especially in this conference (SEC), you have to pay your football players absurd amounts of cash just to come to your school. If we can get a few vatos on our basketball team that are playing for reduced scholarships and all cram into the same dorm, it really helps us better manage our cash situation."

While that logic may make sense fiscally, it’s the ethics involved that have people concerned at the University of California-Berkeley.

Jorge Gutierrez is a junior, starting at guard for the Bears and has really made a name for himself this season –on and off the court. While Gutierrez leads Cal in scoring at 12.7 points per game, his presence has led to turmoil within the Bears’ program.

Prior to the season, two Caucasian walk-ons left the team and cited Gutierrez as the main reason. Jacob Finkelstein and Scott Finch had had enough.

"Dey took my scholarship!" Finkelstein cried. "These scholarships are ‘sposed to go to us white players who bust our butts and are just tryin’ to make a livin’. But no, you got Jose and Juan who are willin’ to play fer next to nothin’ and mowin’ Coach (Mike) Montgomery’s grass and washin’ his dishes. It ain’t right, man."

Finch, a sophomore is equally frustrated.

"The worst part is Jorge is only here during basketball season. Once the basketball season dries up, he’s back down to Juarez or Tijuana or wherever the hell he’s from," said Finch. "I was under the impression that if you were getting a scholarship, you had to at least go to a few classes and be on campus. Dey took ma scholarship!"

Through an interpreter, Gutierrez said that he was thankful for being blessed with the opportunity to play basketball in America, but he missed his family back home in Chihuahua, Mexico.

When asked about the allegations that Gutierrez is mowing Cal coach Mike Montgomery’s lawn and washing his dishes, Montgomery did acknowledge that Gutierrez had been to his home, but declined to comment on the nature of the visits.

"If he wants to come to this country and play basketball, he should have to be a citizen and pay taxes like everyone else," said Finch. "It’s bad enough that he tried to poison us with that Mexican candy when he first got here. Have you had that shit? But now he’s stealing good opportunities for good honest white folk and Obama and the rest of this government ain’t gonna do nothin’ about it. He took ma scholarship!"

Both Finch and Finkelstein said they plan on joining a border patrol in the coming months.

As for Gutierrez, WRNL asked his opinion on upcoming opponent Iowa State and Gutierrez offered this.

Saturday’s game is at 1pm in Hilton Coliseum. No word yet on whether Gutierrez will be serving nachos, sans jalapenos, during half time.