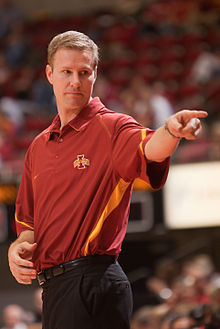 Think about this: The last time Iowa State won in Carver-hawkeye Arena, Larry Eustachy was still a frequent customer at Cyclone Liquors, Adam Haluska was a promising freshman for the Cardinal and Gold, and Fred Hoiberg was toiling away on the Chicago Bulls’ bench along with fellow former Cyclone, Marcus Fizer.

December 13, 2002. That’s the date, in case you were wondering. Jake Sullivan, then a junior, led ISU with 25 points and Haluska chipped in 12 as ISU went on to down the hawkeyes, 73-69. The three trips since then –not so good.

So why should this year’s contest be any different? After all, in its only true road game of the season, the Cyclones laid a horrendous turd in Cedar Falls to a UNI team that iowa just beat 51-39 on Tuesday night. So a hawkeye victory then, right? It ain’t that simple. Alas, the breakdown…

#1 Shut the Shitheads Up. It’s no secret how pitiful crowd enthusiasm has been at Carver in recent years. ISU has to get out to a fast start and hold a lead throughout.

#2 Stay out of foul trouble. In both of ISU’s losses, Jamie Vanderbeken has gotten into early foul trouble. If the Cyclones are going to win this game, JVB has to be on the floor.

#3 Play smart and execute. To win on the road, you need leadership. Diante Garrett and Jake Anderson have to set the pace and tempo and lift the play of those around them.

Other than foul trouble, it has to be rebounding. The hawks will crash the offensive boards and since they aren’t a good shooting team (just 30% from three point range as a team), they’ll have plenty of opportunities to chase their own errant shots. Jaryd Cole and Melsahn Basabe aren’t skilled big men, but they are active and will do the dirty work. If iowa isn’t getting second chance points, ISU will have an excellent opportunity to build a lead. There’s several intriguing match ups and both teams would seem to have decided advantages on the offensive end, but I want to see how the back courts perform. While ISU’s guards are much better shooters, iowa’s will slash to the basket and try and use their size with Matt Gatens and Eric May to get into the lane. College basketball is a guard’s game and this one will be decided in the back court (unless of course JVB plays like he spent the afternoon doing lines with Derrell Johnson-Koulianos and iowa’s bigs go off. I know, it’s a basketball preview, but you didn’t seriously think I’d pass up an opportunity to take a shot at DJKilo did you?)

I think Melvin Ejim is going to have a solid game. I expect iowa to face-guard Scott Christopherson and do everything to keep DG and Anderson from beating them, so Ejim will have opportunities to take the ball to the basket and position himself to get some open looks. In the UNI game, iowa regularly played a half-court trap and UNI’s guards weren’t good enough to beat it. That won’t work as well against ISU. Look for ISU’s guards to beat the trap and Ejim to be on the receiving end of a lot of open looks.

Even if iowa holds an edge on the boards, I don’t think they’re offensively talented enough to break open a significant lead. If the Cyclones can force iowa to shoot from 15 feet out and limit points in the paint, as I pointed out earlier, the hawks will struggle to beat anybody from outside. On offense, DG has to be smart about picking his spots. Bryce Cartwright will hound him all night and iowa will try and trap DG and limit his chances to finish near the basket. If he can get into the lane and kick out to the open shooters early, he’ll open up chances for himself later in the game.

I expect iowa to get out and run with ISU, but they’ve seen the UNI tape and they know the key to beating the Cyclones is slowing the pace and winning ugly. This game will be back and forth and both teams will struggle at times to execute offensively, but ISU’s guards will keep them in the game and be able to respond to any scoring run the hawkeyes pose. ISU will face a double digit deficit at some point, but iowa will go cold and won’t be able to put the game away as ISU pulls out a 75-69 victory.