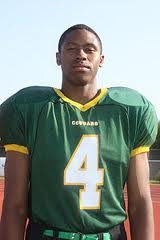 Christian French, Cedar Rapids Kennedy standout athlete, made his college selection public yesterday.·It was widely known he had narrowed his choices down to three schools; the undefeated Oregon Ducks, the well-regarded Notre Dame Irish and the mired in scandal Iowa Hawkeyes.·

The recruitment of French brought about some positive attention to the Hawkeyes, which French claims was his reason for including them in his list of potential schools all along.·He has always had a soft spot in his heart for the home town Hawkeyes regardless of their propensity to shit the bed and hide some crack rocks underneath the mattress.· Ultimately it was the recent development out of Iowa City regarding the arrest of a prominent drug dealer/wide receiver that scared him away from the university.

As for Notre Dame, it came down to a healthy fear of molestation at the hands of the Catholic faculty, and we don't blame him. Also, although nothing specific was ever mentioned publicly, sources close to French cited coach Brian Kelly's complete disregard for human life as another reason he was wary about taking his talents to South Bend.

So get ready Emilio Estevez fans: Christian French is a Duck!