First off, my apologies for missing yesterday’s update. Turns out I’m not in college anymore and I can’t handle a week of 4 hours of sleep per night like I used to.

Thus, Part 2 goes up now (8 a.m.) to give you something for the morning of Hump Day. Part 3 is scheduled to go up at noon to get you through the afternoon.

One thing I did want to do, though, is to encourage you to comment. Think I’m way off? Let me hear about it. I’m a big boy (both figuratively and literally), I can take it. To be perfectly honest, I had a hard time ranking these wins…I’m finding it much more difficult than ranking the losses. There’s a logjam in the area of today’s rankings where they’re so close I could move them up or down 5 spots easily without feeling any different.

Also, if you missed Part 1, you can find it here.

Did you know a really wimpy kid when you grew up? One who always got picked on by everyone in elementary school?

In college football, that wimpy kid was Kansas State, who was perennially in the basement of the Big 8. Then, in the 90′s Kansas State got sick of it and started taking steroids. Way too many steroids. They became too-bulked-up guy and took out years of frustration and ‘roid rage by beating the holy hell out of everyone they saw at every opportunity. Eventually, however, their dealer retired and they laid off the juice. By the mid-2000′s, all that bulk began to turn into some saggy man tits. They still have enough strength to beat up people sometimes, but the scary muscles are gone. Willie really needed to lay off the juice, man...

Now, back when K-State was all beefy, they didn’t pull any punches against ISU, which is what makes this one all the sweeter, because the 2005 Cyclones laid down a pride-obliterating bitchslap on old Billy Snyder and his Wildcats.* It was so bad, in fact, that Snyder would retire 10 days later. I have no idea if the two are directly correlated, but I’m gonna go ahead and give ISU the credit for it.

*WRNL does not condone violence against seniors. (Unless they deserve it)

ISU scored on its first drive, then picked off KSU QB Allan Evridge and capitalized with a field goal. After trading punts, Meyer connected with Blythe for a 26-yard TD as time expired in the 1st quarter. K-State would score 10 in the 2nd quarter to close the gap. That is, until the 2nd half started.

ISU drove the field on the opening drive of the 2nd half and stuck the Kock in the A-hole for a quick TD. On KSU’s first play, Evridge was picked off by Nik Moser and Meyer connected with Flynn to make it 31-10. K-State would fumble the ensuing kickoff, and K-State got BOHICA’d as McCarney pounded Kock in again for another score to pad the lead to 38-10. KSU would score once more near the close of the 3rd, but a steady diet of Kock and Hicks would provide one more TD and grind out the 4th quarter. ISU walked out with the win (their 6th), punching the ticket for a bowl appearance.

It may not be as flashy as some of the others on this list, but it held a lot of weight.

After 5 wins in 2 years under Gene Chizik, first-year head coach Paul Rhoads had equaled that total and the Cyclones were on the cusp of bowl eligibility. However, after a big 9-7 win in Lincoln (we’ll come back to that one), ISU dropped two straight to high-powered offenses, at Texas A&M and at home versus #18 Oklahoma State. With a date with another high-powered offense (Missouri) looming in Columbia the following week, ISU’s best shot at the postseason was to beat a 3-6 Colorado team in Ames on Senior Day.

ISU went up 7-0 early on a strike from Arnaud to Hamilton. The teams traded field goals in the 2nd quarter, with Mahoney connecting on a 25-yarder as the first half expired. In the 3rd quarter, ISU took advantage of a CU fumble deep in their own territory, as Arnaud connected with Robinson on a dump-off to bring the score to 17-3. From there, ISU’s defense took over, with David Sims forcing a fumble in the red zone to halt a Colorado drive. CU would score a TD with 5 minutes remaining, but ISU’s offense ground out the clock, sending ISU to a bowl for the first time since 2005.

If you want to relive it, Cyclones.com has video highlights here. Personally, I think the best part of this game was that, even though CU brought it close toward the end, all the ISU fans I’ve talked to about this game agrees about the feeling that, "We don’t lose this kind of game anymore." I'll take that, thank you.

ISU went into College Station at 4-3, having snapped a 3-game skid the week before at home vs. Oklahoma State. ISU was 0-7 against A&M in its history, but on this day, ISU put on an offensive clinic. Meyer connected with Blythe on a fade on ISU’s first possession to go up 7-0. Courtney Lewis would squirt free for a 73-yard touchdown run in the closing minutes of the first quarter to make it 7-7, but it was ALL Iowa State from that point out. Stevie Hicks would punch one in to make it 14-0 at halftime. The Meyer-Blythe connection was good for 21 more on strikes of 53, 19, and 63 yards, and Hicks would add one more to bring the final score to 42-14.

Blythe had a career day, catching 8 passes (career high) for 214 yards (2nd-highest single-game total in ISU history) for 4 TD’s (ISU single-game record). It was a great day to be a Cyclone, and, as one of my Aggie friends noted, "It was the only time I’ve ever cried at a Texas A&M football game." Win-win, baby.

ISU was ranked at #11, at 5-1 and with the meat of the schedule ahead of them. Coming into town was the great ass-pirate himself, Mike Leach, and his Air Raid offense (once they found their way out of the equipment shed and on to the field). The first half was fairly uneventful as the teams played to a 3-3 tie. Then, Seneca Wallace unleashed the most famous 12-yard run in history:

Be sure to appreciate Michael Wagner laying the lumber to Ricky Sailor. Go ahead and watch it again, I’ll wait.

Tech came back to score it on a 1-yard dive, and then ISU unleashed another big play:

Wallace would put the ball in the endzone twice more, on a 3-yard run and a 20-yard pass to bring the score to 31-10 at the end of the 3rd, and ISU’s defense took care of the rest. The win brought ISU to the high-water mark of its football program, a #9 ranking, national exposure and newfound respect. 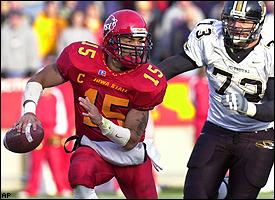 Do you know who I am? Have you got any idea how many anonymous defenders I've juked out of their shoes over the years? I mean, look at you. You don't even have a name tag. You've got no chance. Why don't you just fall down?

Three weeks after "The Run", ISU returned to Ames after tough road losses to top-10 teams in Oklahoma and Texas. After 2 difficult weeks, Seneca Wallace figured out where he left his magic, and an offensive shootout ensued. ISU went up 3-0 on a Benike field goal and ISU and Mizzou would trade touchdowns on the next 5 drives to bring the score to 24-14. Benike would add another field goal, and Mizzou scored on a Zack Abron run to close out the half at 27-21.

The second half began quietly, until a Tony Yelk punt was blocked and Mizzou capitalized with a 55-yard strike from Brad Smith to Darius Outlaw to take the lead 28-27. Michael Wagner would score and Seneca would complete the conversion to regain the lead 35-28. Special teams would bite the Cyclones once more, as Mizzou returned a Tony Yelk punt 80 yards for the tying touchdown. 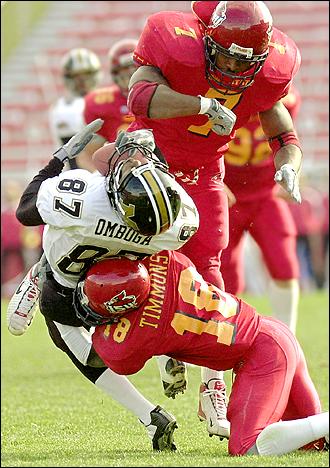 The game turned into a defensive battle for most of the 4th quarter, until ISU gained possession on their own 15 yard line with 3:33 to go. After a penalty dropped ISU half the distance to the goal, Wallace would lead the Cyclones 93 yards down the field on a 13 play drive capped by a 1-yard TD run by Michael Wagner with 32 seconds remaining. Wallace set an ISU record, racking up 493 total yards for the victory.