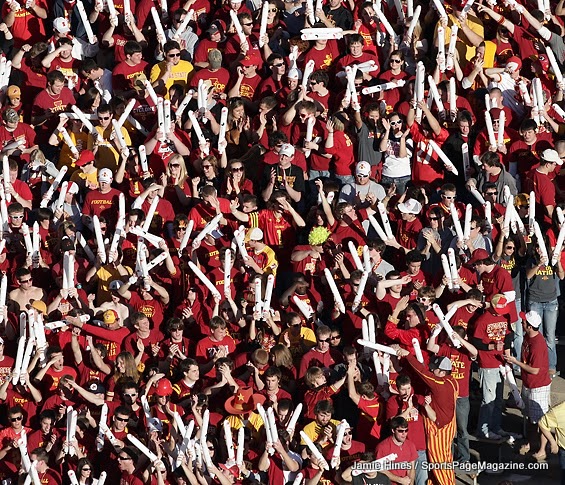 Football season is 14 days, 11 hours away. I’m getting slightly anxious, as you can probably tell. These last two weeks can’t go fast enough. A new decade of ISU football is just around the corner.

Enough chit-chat. Let’s get on with the Top 10*

*First off, a confession, in the form of a "The author of this article is a total dumbass" award.

You do some stupid shit at 2 a.m., such as reading from the wrong list when you put together the first article in a week-long series and accidentally including a game you meant to leave out, then realizing it a little too late. So…yeah. My dumb ass actually has 26 games on this list. After pondering about how to fix this little issue, I concluded to just go with it and do a little merge on today’s list. Between adding the extra game, catching several horrid addition errors, misspelling Ryan KOCK’s last name (thanks to VeloClone for pointing out the mistake – I actually never knew it wasn’t "Koch" until I checked the old rosters yesterday) it’s been a long week.

In any case, the rest of the WRNL crew gave me a merciless caning for my insolence and sent me to my room without any beer, forcing me to do today’s update with a bad case of the shakes. Now that I’ve cleared that up, moving on.

ISU had begun the 2004 conference season with three losses, but rallied after the Baylor win to pull off two straight. Next up was a must-win game against the big, bad bullies of the Big XII North, Nebraska, in Ames. ISU wasted no time firing out of the gate, halting Nebraska on their first possession and driving down for a Bret Culbertson field goal. After forcing Nebraska to turn the ball over on downs, Meyer connected with Blythe for a 51-yard gain, and six plays later, Meyer connected with Ben Barkema to bring the score to 10-0. Nebraska scored on the first play of the 2nd quarter to bring the score to 10-7, but the Cyclones struck back with a 12-yard run by Stevie Hicks to regain the 10-point lead.

Nebraska found their way into the red zone on the next drive, but the ISU defense stood tall and stopped Nebraska at the 6, where they missed a short field goal. After a quick interception, Nebraska had another field goal attempt blocked by DeAndre Jackson, and ISU would capitalize on the momentum with a Meyer-to-Blythe touchdown with seconds left in the half to bring the score to 24-7. ISU would pad the lead to 27-7 after the break, but Cory Ross would find his way into the endzone to make the score 27-14. ISU answered immediately, with Meyer throwing a perfect pass to Jon Davis for a 77-yard touchdown to blow the game open, 34-14. Nebraska mounted a comeback in the 4th quarter behind two Brandon Jackson touchdown runs and got the ball back again with 2:55 to go. However, Tim Dobbins picked off Joe Dailey on the Huskers’ first play, and Bret Meyer converted a 4th-and-1 to allow the Cyclones to run out the clock.

On the last day of the decade, ISU football delivered one of its sweetest victories. Especially sweet for me, having grown up in the Twin Cities metro. Best part about recent wins? Great video footage. We’ll defer to YouTube again:

Because of my dumbassery (see above), these are the two games I’m choosing to rank as one for consistency. Since they’re both wins over Iowa and they were supposed to be #9 and #8, they’re the logical choice for the combination. 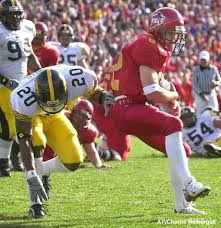 Wallace connects with Danielson for an early TD

8A.) Originally scheduled for September 15, this game was pushed back to the end of the season after the terrorist attacks of 9/11. Date may have changed, but the excitement didn’t, as ISU and Iowa engaged in a close battle that went down to the wire. ISU drove down the field on their first possession and scored on a 3-yard strike from Seneca Wallace to Lane Danielson. Both teams missed field goals in the 2nd quarter, but Ennis Haywood got into the endzone with a minute left in the half to give ISU a 14-0 lead at the break. Iowa would get on the board on their first drive of the 2nd half, as Kyle McCann connected with Ladell Betts for a 15-yard TD. Betts would tie the score on Iowa’s next possession, escaping for a 42-yard touchdown run. However, a great punt by Tony Yelk would pin the Hawkeyes down at their own 1-yard line, and a short punt was returned by Michael Wagner to put ISU in great field position to start the 4th quarter, when Tony Yelk hit a 33-yard field goal to give ISU the 17-14 lead.

ISU would get the ball back with 11:16 to go in the 4th, and they mounted a time-consuming drive that was aided by a little luck. Seneca Wallace was picked off deep in ISU territory by Grant Sheen on 3rd-and-long, but he would fumble on the return, which was recovered by Ennis Haywood for no net gain on the play (but a new set of downs to work with). ISU drove down to the Iowa 33, grinding the clock down to 3:45 before taking a delay-of-game and punting. Iowa had a chance to drive the field, but McCann was picked off by Adam Runk, and ISU ran out the clock to take the victory.

8B.) The very next season, the 2-1 Cyclones headed into Iowa City to face the 2-0 Hawkeyes, and the Hawks were hungry for some payback. They took 2 plays to score on a Fred Russell run to make the score 7-0. Seneca would hit Lane Danielson for a 60-yard gain and Hiawatha Rutland would find the endzone to make it 7-7, but the rest of the first half was ALL Iowa. The Hawkeyes opened up a 24-7 lead by halftime.

The 3rd quarter, however, belonged to the Cyclones. After Wallace scooted into the endzone on a 5-yard run, Brad Banks would fumble on the Iowa 33. Four straight runs by Hiawatha Rutland would bring the Cyclones to the Iowa 7, where Wallace connected with Jamul Montgomery to close the gap to 24-21. Banks fumbled again at the Iowa 19, and in 2 plays, ISU was up 28-24. Iowa took over on their own 5, but was dropped for a safety to bring the score to 30-24 going into the 4th quarter. Just like the year before, ISU got the ball deep in their own territory (ISU 5) with 11:41 to go in the game, and just like the year before, ISU mounted a grueling drive down to the Iowa 20, where Benike hit a 36-yard field goal to bring the lead to 33-24 and grind the clock down to 5:14. On Iowa’s first play, Ed Hinkel would fumble, and another Benike field goal would put ISU up 36-24.

Iowa would find their offense and drive the field to climb within a touchdown, but the onside kick was recovered by the Cyclones, who would run out the clock to make it 5-in-a-row against the Hawkeyes. Although nobody knew it at the time, it would be the most significant upset in the series. Iowa would win the remainder of their games, but the ISU loss would take them out of the national title picture. Iowa went to the Orange Bowl and lost big to USC, and Ohio State would "beat" Miami on a phantom pass interference call for the National Title in the Fiesta Bowl.

Like the 2009 CU victory, this game is sweet because of the weight it held. Picking up a "W" against the Tigers gave ISU its first winning record since 1989 and made the Cyclones bowl eligible for the first time since 1978.

Mizzou went up 7-0 early on a Darius Outlaw run, but ISU took over and scored quickly when Rosenfels snuck into the endzone (Gomez missed the PAT) to make it 7-6. On ISU’s next drive, J.J. Moses took the ball on a reverse and ran 34 yards for a score. Ennis Haywood would add 2 more TD’s to break it open 26-7. Missouri scored with 1:45 remaining in the half to bring it to 26-14. Haywood would break free for a 60-yard run on the final play of the half, but was caught by safety Clarence Jones on the Missouri 9-yard line.

Missouri would threaten in the 3rd quarter, reaching the ISU 26 before Outlaw was picked off by Marc Timmons (starting his first game), who took it all the way in for the score to bring the lead to 33-14. Rosenfels would score once more on a draw and Missouri would add a touchdown in garbage time, but the victory was sealed. Haywood led the way with 214 yards on the day.

After Iowa snapped ISU’s 5-game streak with wins in 2003 and 2004, few people outside of Ames gave the Cyclones any sort of shot in the 2005 matchup. Iowa was ranked #8 and HEAVILY favored. After trading turnovers and punts, Jason Berryman recovered a fumbled snap that went over Drew Tate’s head at the Iowa 12. Two plays later, Meyer connected with Flynn on a slant for a TD that put ISU up 6-0. In the 2nd quarter, Tate was picked off by Steve Paris, and during the return, Paris clocked Tate, knocking him out of the game with a concussion. Tony Yelk would add a field goal to put ISU up 9-0. Jason Manson took over at QB for the Hawks, and on his second attempt, he threw a Pick-6 to LaMarcus Hicks. ISU went into the half up 16-0.

Iowa would finally mount some offense and get on the board with a field goal, but a Scott Chandler fumble early in the 4th sent the Hawk fans streaming out of Jack Trice Stadium, and ISU stuck Kock into the Hawks end zone shortly thereafter to bring the lead to 23-3. The clock ran down, and ISU fans streamed on to the field, celebrating the team’s first win over a Top 10 team in over a decade.