Editor’s Note: As kickoff is on Thursday, this preview is being posted a day earlier than normal.

Welcome to the first WRNL preview of Iowa State’s 2010 football season. Every Thursday we will post our preview and prediction of Iowa State’s upcoming game. So sit back, crack a Natty Light or six, and get yourself pumped up for some good ole FOOTBALL in less than 36 hours.

Iowa State holds the edge in the all-time standings, 2-1.

The 2004 victory was over a Huskies team that would end up going 9-3 and the 41 points scored by Northern Illinois were the most an Iowa State team has allowed in a victory.

As we all know, Iowa State finished 7-6 in 2009 and capped off the year with a 14-13 victory of Minnesota in the Insight Bowl. It was Iowa State’s first bowl appearance since 2005 and first bowl win since defeating Miami (OH) in the 2004 Independence Bowl.

Northern Illinois also finished 2009 with a 7-6 record but lost their final three games after rattling off a mid-season four game winning streak. The final loss was to South Florida in the International Bowl.

With most of the offensive line returning (C Ben Lamaak, LG Alex Alvarez, LT Kelechi Osemele) plus the return of Austen Arnaud and Alexander Robinson; Iowa State should have little issue moving the ball on the ground. Iowa State ranked 35th in the nation in 2009 in rush offense and North Illinois ranked… 35th in the nation in rush defense in 2009. Northern Illinois returns 11 starters on defense and has one of the most experienced defenses in the MAC, if not the country.

Iowa State will need to improve on their passing if they are to win this game. After finishing 94th in the nation in passing yards there will need to be a dramatic improvement to be competitive in the Big XII and it starts on Thursday night.

Look for Austen Arnaud to make plays with his feet if the Northern Illinois defense decides that they want no part of Alexander Robinson. If the rushing attack is working early and often in the game expect it to continue as it will wear down Northern Illinois and keep Iowa State’s defense off the field.

Get ready for fireworks or a slugfest. No one knows which unit will show up for both teams. By all accounts the Iowa State defense improved everyday throughout fall camp but still starts three inexperienced linebackers, an undersized defensive line, and no Big XII Defensive Newcomer of the Year (David Sims is suspended for the game).

Northern Illinois returns 1,000 yard rusher Chad Spann and a backfield that is experienced. Co-starting quarterbacks DeMarcus Grady and Chandler Harnish completed 61.3% of their passes together for 14 TDS and 8 interceptions in 2009. Harnish is more of a pocket passer who saw more snaps last year but Grady presents a rushing threat not unlike that of MarQueis Gray of Minnesota. 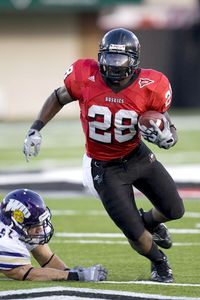 Northern Illinois will likely not look to spread the field and will instead rely on a mix of running backs to try and hammer Iowa State all night. Losing David Sims for this game hurts and Zac Sandvig is a capable fill in but he does not bring the experience or power that Sims does to the rushing defense.

Reason: Iowa State is inexperienced up front and early on will be fighting both the experience of Northern Illinois’ line and their own inexperience. If the tackles cannot keep the guards off the linebackers expect chunks of yards to add up.

Both teams are going to be starting inexperienced players on special teams. Iowa State will either be starting Senior Daniel Kuehl or Freshman Kerby Van Der Kamp at punter and Northern Illinois will be starting either Freshman Mathew Sims or Senior Michael Cklamovski at Kicker.

This is the part where you author admits to not seeing much of Northern Illinois’ special teams or even know where they stand. After watching every Iowa State game last year I will comfortably give this advantage to Iowa State, pending how the punting game works out.

Most Intriguing Matchup: Iowa State punting vs Northern Illinois punt return. Most likely we will see both Daniel Kuehl and Kerby Van Der Kamp punting on Thursday. Can they be consistent and can they kick to help their coverage? Or will we see some Gene Chizik-esque punt coverage?

Reason: Paul Rhoads treats the special teams function as the 3rd leg of the tripod like it should be. The punters have a chance to struggle but their support group should be there to pull them through.

Get ready for a roller coast of emotions on Thursday night. The players are going to start on a high note like anyone would for this first game, but if the defense gets punched in the mouth or the offense goes three and out to start expect to get restless.

Expect Iowa State to spread it out early in the game but not necessarily throw the ball. They will test the Northern Illinois front four and see how they match up to one of the best offensive lines in the Big XII. If Northern Illinois stacks the box expect a lot of screens to the WRs to get favorable matchups.

Northern Illinois is going to play ball control most of this game and if they keep Iowa State from stretching out a double digit lead early then the game will be close until the final whistle. If Iowa State can force some three and outs early and keep their own offense on the field expect this game to get away from Northern Illinois quickly.