Well, it finally happened...our mothers called and told us we were being too harsh on those poor Hawkeyes. She reminded all of us that if you don't have anything nice to say about someone, just don't say it at all. So we got together with our friends over at The Hawkeye State, and after hugging it out and making fake apologies like we did when we were 8, made a list of nice things to say about each other. We stopped at 6, as we hope that magical number will result in Iowa State actually scoring a touchdown this year...

2. The Iowa backfield is by far the most talented in the nation at oiled up pictures: Prove me wrong... 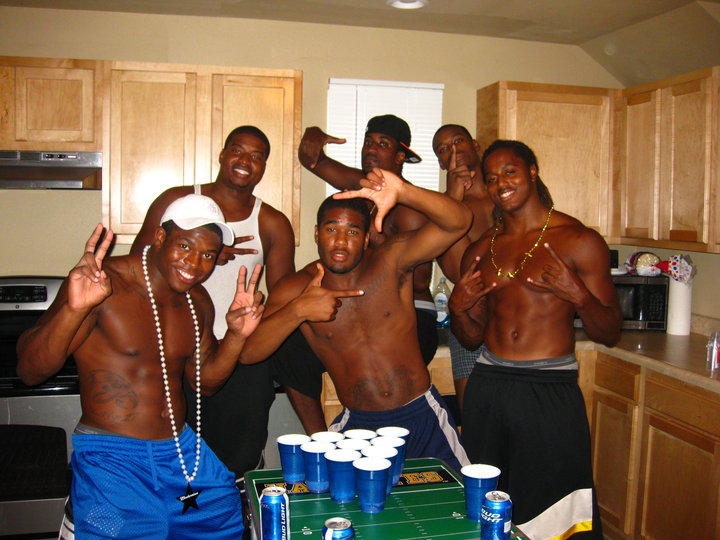 3. Iowa fans provide great hospitality: The last time I was in Iowa City, my cell phone died. Iowa fans saw my Cyclone shirt and realized that I was probably far from home, so a bunch of them started throwing batteries at me. They obviously didn't realize that my phone didn't take "D" size batteries, but it's the effort that counts, right? Also, the next time I run out of beer, I'd like to remind the Hawkeye fans that no matter how many beers they throw at me, I only have two hands.

4. Adrian Clayborn's life lessons: He taught me that the old addage that "two wrongs make a right" is a complete fallacy. In fact, one wrong makes a right. The next time someone calls me a racial slur, I'm punching them in the face.

5. Iowa fans respect their elders: While much of our society is busy shunning our senior citizens, The Hawkeyes revere their senior citizens so much that the word Hayden Fry can be substituted for Viagra in Hawkeye homes.

6. Iowa announcers provide excellent medical advice: If your girlfriend/wife needs a breast exam, Ed Podalak will be there with a helping hand.. or two.