That was painful. Extremely painful. Quite possibly more painful than the birth of my second child, who was 10+ lbs at birth. At least with her I had the sweet, sweet epidural to take my mind off of what was going on down south (remember, I'm the lone female in the motley WRNL crew - the only one with boobs. Real boobs, not the fat guy kind.). Even the five beers I downed during the game wasn't enough to dull the pain (hey, I had my two kids with me. I had to be semi-responsible).

As much as I hate to admit it, Iowa is good. They exploited the shit out of our weaknesses, not the least of which was our complete inability to tackle. And some missed blocks. And our inability to read plays. And our tendency to commit freaking ridiculous penalties (also getting completely hosed on a few occasions by bogus calls).

But at least we got the damn offensive touchdown monkey off our backs.

So to finally scoring a touchdown, even if it was against Iowa's 4th string defense made up of players' arthritic, blind grandmas, I say Mission Accomplished. 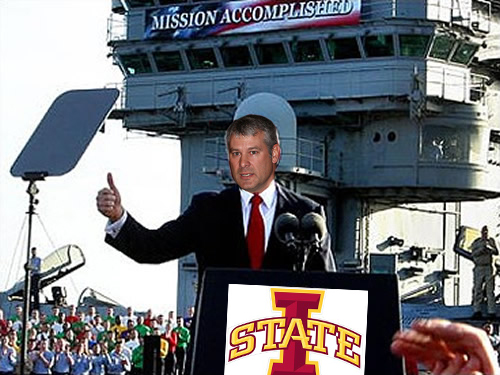 On to Farmageddon and kicking the shit out of Kansas State. Or at least having better tackling and winning in KC.