Wow Cyclone fans, if you are still alive or are still just contemplating jumping off that 2nd story ledge come in and subject yourself to more

torture by re-living what was arguably the worst game I've ever seen Iowa State suit up for. Do you realize how hard it is to hand out this coveted award after such an abysmal performance? Hell, even writing this article is harder than a 14 year old boy at a co-ed sleepover, but alas here I am living up to my dedication to this award so you all can celebrate mourn the greatness that is Iowa State Football.

As a reminder I will award the best offensive, defensive, and surprise Iowa State players from our latest game and also throw the Gene Chizik Novelty Coin at a player from the opposing team who stood out due to his poor performance or even his tremendous performance causing Iowa State fans to loathe the man.

The lone bright spot throughout the entire game was none other than true freshman Shontrelle Johnson. If you took anything from the game, other than the lashings from the hawkeye faithful, it's the positive outlook for the future at running back and possibly kick return. Shontrelle attempted to bring the Cyclones to life with 108 all purpose yards consisting of 99 yards from 2 kickoff returns and 9 rushing yards. Technically a kickoff return is not considered an offensive statistic but since our offense was so ineffective against the hawks I'm going bend the rules a little and consider it part of our offense. Let me be the first to thank you Shontrelle for giving me a slight glimmer of hope.

Now the article is damn near impossible to write and stay true to my honest ways. Let's face it our defense would have played better after throwing back a couple 40's of Natty Light and lining up holding hands like the childhood game Red Rover. Red Rover, Red Rover, send Adam Robinson right over. However since I must give this award to someone, it's going to Stephen Ruempolhamer. Honestly, his stat line isn't all that bad, but when you get torched for 35 points (28 coming in the first half) and saint Ferentz takes his foot off the gas so as not to make a complete mockery out of Iowa State, it's really hard to award a defensive helmet sticker. Regardless, Rump accumulated 7 total tackles including 2 tackles for a loss. Not bad for an interior defensive lineman.

Against the will of my WRNL brethren, I'm awarding the surprise player of the game to true freshman punter Kirby Van Der Kamp. After not knowing what to expect going into the Iowa game from the punter position, I came away "satisfied" with the young kid. Nothing too jaw dropping, and a bit inconsistent, but he was good enough. He punted a whopping 7 times in the game for a total of 283 yards. His longest boot of the game sailed 52 yards and he managed to place 2 of those 7 inside the 20 yard line. I'm going to guess he played well enough to take over the starting punter position that was up for grabs between him and Daniel Kuehl. 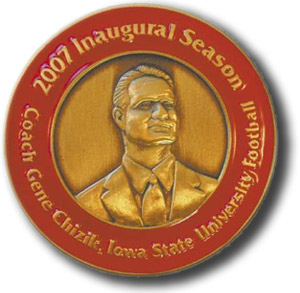 Captain Kirk, you had Iowa State by the balls and you failed to cut them off and shove them down our throats to tickle our tonsils. Personally I appreciate the good faith gesture, but I'm going to guess you have a lot of Iowa fans that are disappointed in your lack of blood thirsty instincts. In fact your decision to not run up the score cost you 1 spot in the latest coaches poll. So after a game you clearly kicked the living shit out of your in-state foe you managed to irritate a couple of your own fans, make the Iowa State fans feel just a little bit better, and drop from 9th to 10th in the coaches poll. I thank you coach Kirk Ferentz and in appreciation of your good will, I award you with this commemorative Gene Chizik Coin. Enjoy!!