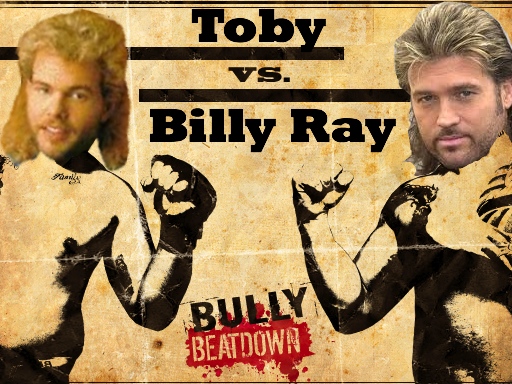 Farm smack, one of the lowest forms of trash talk known to man. It's up their with arguing over whose double wide is better, trash talkin’ over who has a better 6 on 6 girls basketball team (WTF is that about anyway?), and debating whether Toby Keith could win in a fight against a young Billy Ray Cyrus. Personally my money would be on Billy Ray. Anyone whose seed can produce something as wonderful as Miley is a bad son of a bitch! Seriously, tell me you don’t sing along every time you hear "Party in the USA?" Although, now that I think about it, Toby sees no problems with sticking his boot right up your poop-shoot. He also chased down Osama in a 2009 Ford F-950 Super Dura-Max Dully QuadCab, with a Turbo Bedliner, and that’s just awesome. We’ll call this one a push, but either way the point about farm smack being low still stands.

However, this isn’t your typical argument over whether John Deere makes a better tractor than Case IH. Oh no my friends, this is the battle of Farmaggedon we’re talking here. This is a football game that somehow determines agricultural supremacy. The outcome of this game very well could have significant impact on average agricultural land prices throughout the Midwest and could change prices per bushel with the bounce of a PAT off an upright. Well, maybe not actually any of those things are true, but either way we think our flat crop covered state could beat your even flatter crop covered state’s ass!

Here are only a few of many reasons why Iowa is more awesome than Kansas. Please note that we have chosen to use an extremely liberal interpretation of the word "Awesome". 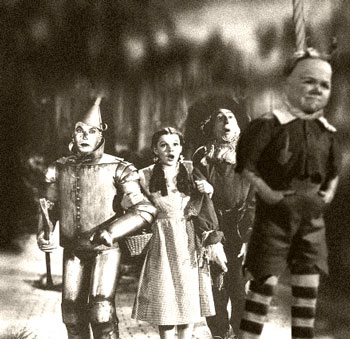 The state of Kansas' only claim to fame is a 70-year-old movie that you either have to be gay or extremely doped up to enjoy. And doesn't a midget hang himself in there some where in the background of one of the scenes? If I had to guess, I’d say this is most likely because he knew that Kansas really sucks. Well, and he was a midget, which also has to suck. But we're guessing he killed himself mostly because of Kansas. We're thinking 60-40. In fact, if that movie were shot in Iowa, that midget not only would never have hung himself, he probably would have pleasured Dorothy, the tin man, and the little dog, and then went on to be the badass that Vern Troyer only wishes he was. Thanks for taking away a little people from their big world Kansas… Asshole.

Right now some good ole boy out sickle whacking his wheat pile is probably saying "Well we have wheat beer, which is super popular and great with a lemon in it. Iowa can’t claim that… haha". And to that I say "Screw your wheat crap!" Cut the sleeves off my finely threaded WRNL tee shirt and give me a cornfed Natty. And while I’m sucking down the sweet nectar that is the Eustachy co-ed puss magnet, I’ll just sit back and contemplate just how gay sunflowers and wheat are. Let me know when one of your fruity wheat beers sponsors a NASCAR team, then we can talk… #3 (moment of silence)

Iowa has the World’s Largest Truck Stop. Yea, just let that sink in for a second. THE WORLD'S LARGEST. We aren’t just talking some crappy little TA here, this baby is the real deal. And with it comes the largest population of lot lizards. This is a special breed of prostitute typically reserved for truck stop parking lots and/or Skat films. Most of them could probably use a dentist, thankfully there is one there. Most could also use a good hose down with a power washer, many of those there too. I'd say they could all use a change in clothes, thankfully there is a wide selection of wolf t-shirts and Indian arrowhead necklaces to choose from. Really you could pick one up there and get her fixed up without ever having to leave the truckstop. It's a magical place, and it's all ours Kansas! Jealous much?

To Kansas’s credit, they do have way more sheep than Iowa. And everyone knows that real sodomites prefer sheep to pigs? So I guess that’s a win for Kansas, kinda. 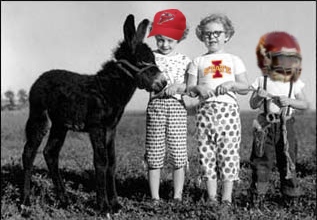 So, although we’re playing a football game on Saturday to determine ag supremacy, I think it’s clear that in the end Iowa is still the real winner here despite whatever the outcome might be. In the end, Kansas is just a poor man’s Nebraska, where as Iowa has claim to both the most delicious mid summer peaches and cream as well as John Wayne. Advantage Iowa. Suck on it Kansas… "And your little dog too!".

We’ll see you Saturday sunflower staters. We’ll be the ones with nicer overalls, bigger trucks, and corn to cook on the grill. And if everything goes according to plan, hopefully a few of the lot lizards we're planning on cleaning up with the pressure sprayers.