So there I was, naked in the dark on a chair in my kitchen sipping a warm natty I found left over in the tailgating cooler … it’s where I do my best work.

I was trying to draw out a topic from the fact that ISU plays opponents with purple Thundercat logos in back to back weeks. Remembering the Thundercats cartoon left me thinking about all the awesome shows from my youth: GI Joe, Transformers, JEM ... and He-Man ... He-Man! Of course! He-Man was awesome! Even better it starred the most famous purple panther of them all: that one that Skeletor rides! - this was going to be great. I slipped my quickly rising semi into a pair of dodger shorts and went to work.

I was cruising google images of the Masters of the Universe cartoon looking for inspiration and giggling with excitement when the wife sat down beside me.

clonesjer: "looking for a picture of the purple cat Skeletor rode"

Wife: "ugh, is this for that website? And wasn’t He-Man gay?"

clonesjer: "yes on the site part, no on the gay part. why would you even think that?"

clonesjer: "see, He-Man was normally this guy named Adam, just a regular kind of roided-up looking prince and he had this really timid green and yellow tiger named Cringer. But when he ‘had the power’ they both turned studly, He-Man brought down some lightning, ripped off all his clothes except a loincloth, Cringer turned into Battle Cat, basically the same green tiger but with a saddle and a crown facemask thing, and they were both suddenly more bad-ass. It's simple really"

clonesjer: "no! he’s not gay, jesus, where does that come from? ... well, ok he was a little fruity when he’s Adam, but definitely not as He-Man"

Wife: "oh so he rides his pretty green tiger with a tiara in nothing but his loincloth? sounds like a real ladies man"

clonesjer: (internalizes rage) ... "anyway, He-Man’s enemy was Skeletor and he rode a purple colored panther, which wasn’t really shown that often – but I had the toy so I know it existed"

clonesjer: "No, but the panther was bad-ass all the time because he was the bad guy"

clonesjer: "And the team we just played was the KSU purple wildcats, which is basically a panther – and UNI is the purple panthers … so that’s the connection! It’s perfect right?"

clonesjer: "Friends was a stupid show"

clonesjer: "Here check out this video – and tell me if this is gay or awesome"

Wife: "you're an asshole"

clonejer: "you cut me deep"

clonesjer: "the panther! the purple panther!"

Wife: "right - you're losing your mind"

clonesjer: "this is gonna be awesome - you just wait" 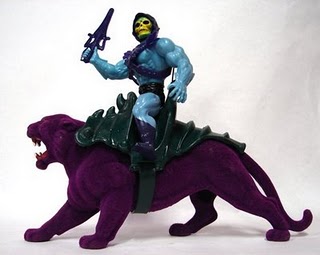