My crew met up in West Des Moines around 2:00 PM with hopes of getting into our hotel in time to make it down to the legend that is Kelley’s Westport Inn to attempt to recreate a People’s FAC, circa 2006, minus of course relieving ourselves all over Lumpy’s while drinking $.25 Mich Goldens.

We were shortly on the road, and several passengers decided to begin partaking in the sacrament of Busch Light before we even left the Des Moines Metro. Knowing that Missouri has no open container law, I waited until it was perfectly legal to start boozing. God, that’s a great law. Anyways, the trip between the Mizzou/Iowa state line and KC was fairly eventful. Between analysis of the game, and telling stories that would cause people who understand what "shame" is to be embarrassed, we somehow managed to hand off an ice cold BL Smoothie to a car load of State fans at 80 miles an hour, without killing anyone! We also got a great "refereshment" stop right along I-35 captured on video.

Of course, this whole time, Cyssormytimbers is texting me about all the fun being had at Kelley’s, and is making me jealous that we are still on the road at this point. We reach our hotel in downtown KC around 5:00, and got ready to head out for the evening. We headed down to the Power and Light District, which was a short 2 blocks from the hotel, to meet up with Cyssor and his crew, and partake in the ISU Pep Rally. I was pleasantly surprised by the Pep Rally, as the entire court yard at P&L was covered in State fans, and we had a good time. We were rocking the WRNL t-shirts, and Cyssor had been getting comments from our loving readers all day. Seriously guys, it means a lot to us to see you folks getting a little enjoyment out of this tomfoolery (sidenote: "tomfoolery" is a recognized word in Microsoft 2007). The best comment of the evening came from a gentleman in his mid to late 50’s who saw Cyssor and I walking up the stairs and said "I love your site. You guys are kind of f-ed in the head, but hey, so am I". You sir, are the man.

Soon enough we found ourselves schmoozing with some Cyclone celebrities. We chatted with Jeff Johnson a bit, and took a picture with him, and saw John Walters running around, but didn’t quite grab his attention. We decided that was starting to get out of our comfort zone which usually consists of dick and fart jokes, ripping on each other, and drinking. Thus, we decided to hit the many surrounding bars.

It quickly came to our attention that the PBR Big Sky (no, this had no connection to the cheap beer) Bar was selling $2 beers and giving away free brisket. All for filling out some survey. We hit that like a Musky. The brisket was phenomenal, and the beer went down very, very smooth. Between my crew and Cyssor’s crew, we had a good thing going at the Big Sky. 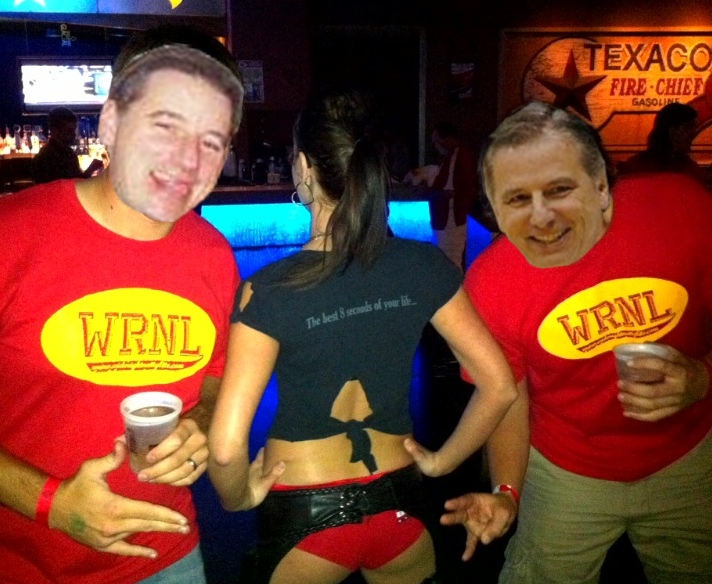 Needless to say, we found this attire "shocking".

Between the scantily clad wait staff, and the abundance of State fans, it was a blast. We even had a good chat with Tron, of CycloneFanatic fame. Tron, if you haven’t noticed, is a very large and spirited man, and here at WRNL we’re quite glad to be on his good side. 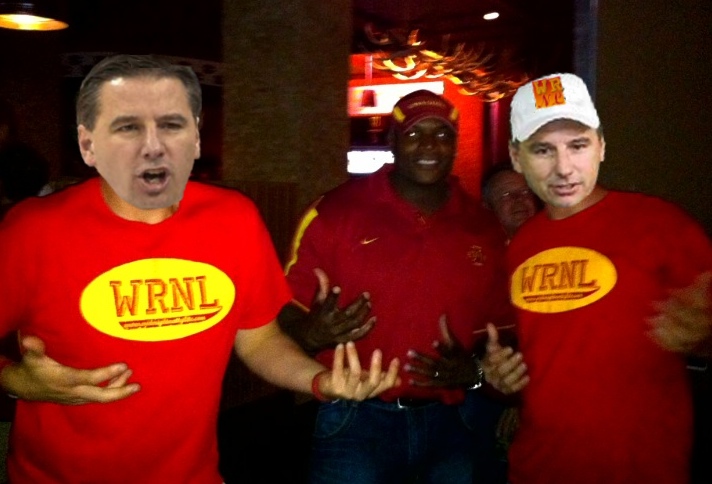 The night even included a visit from WRNL friend Cylax51, and his very inebriated and entertaining bride.

The next day, we woke up early, and it was time to round the troops for Arrowhead. Our hotel looked like a disaster. While half of the crew laid around and bitched about being awake @ 5AM, a few of us went into the KC ghetto in search of caffeine and hydration. I chugged 20 ounces of VitaminWater, but this lead to a disastrous result as I was soon projectile vomiting in the bathroom of our hotel. Nonetheless, we were able to get the boys ready (we had to severely beat one of my buddies with a pillow for over a minute) and get to Arrowhead.

We were able to tie in with CanAzn’s crew which came complete with a sweet tailgate grill, and a Hawkeye fan (much to our chagrin). Tailgate insanity soon ensued. The flip cup table was ready to rock again, and the tailgate roster was an all star line up featuring WRNL regulars CanAzn, ClonesJer, Cykosis, some WRNL backroom regulars in CylentButDeadly, Brentwood, CyDude16, vanillathrilla, and many other friends and family members. CyDude brought a beer bong, and several individuals who shall not be named decided to relive their college years with a cheap piece of funnel jammed down their throats. The day continued to be a wonderful celebration of Cyclone Football, as we got the grill going and loaded it up with some delicious deer loin that had been marinating for several days. 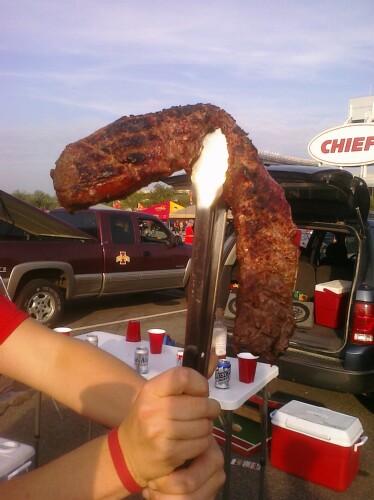 Some wandering coeds had a cardinal and gold Shot-Ski which they were more than willing to share with us in exchange for some 20 person flip cup games. We love our flip cup. In fact, Team WRNL is now 6-0 vs. all challengers throughout the season. If you think you can out flip WRNL, we'd like to see you try. 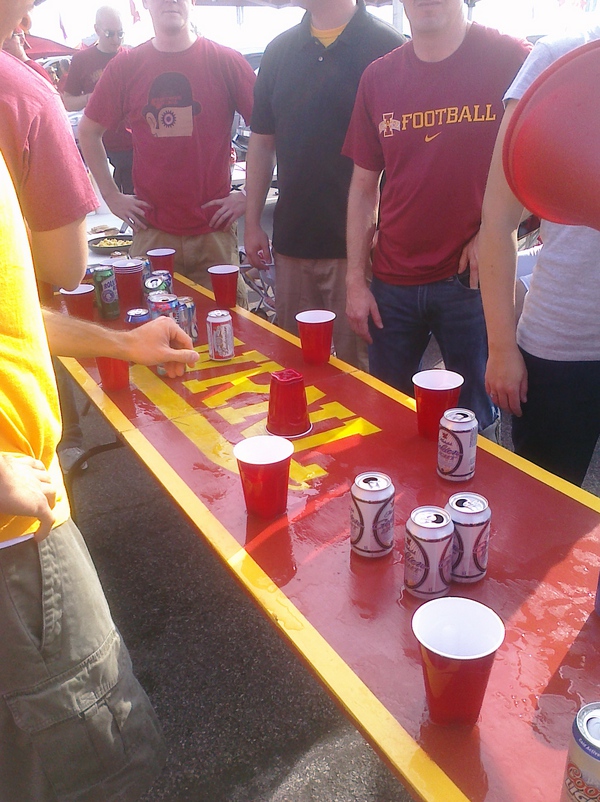 At some point, CyDude’s vuvuzela was turned into a beer bong, which, in a near unanimous poll, was found to be a far more acceptable use for such a device. He also, as evidenced in the lower picture, has a very weak bladder. 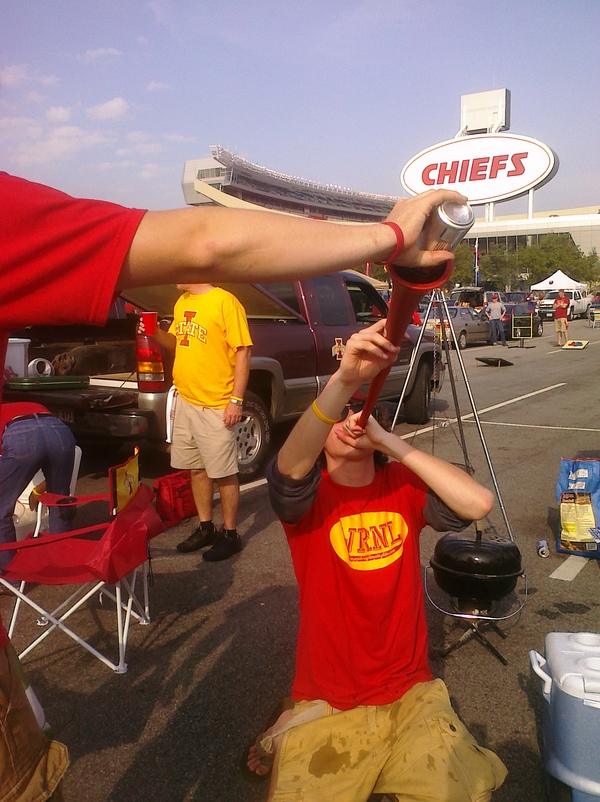 Eventually, we had to shut down the fun and roll on into Arrowhead, for what was pretty much a terrible afternoon. Post-game, we went our separate ways, with my crew heading to Kelley’s. There weren’t a lot of State fans at Kelley’s post game, but it was nice to experience it finally. I can only imagine what it looks like during the Big 12 tourney. We spent the rest of the afternoon sleeping off our beer and meat coma, and watching football. Another rousing evening at the PBR Blue Sky was in order, and it was again full of State fans drowning their sorrows and taking a slight bit of solace in the Iowa loss, because let’s face it: misery loves company. My crew wrapped up the evening at an all-night dinner, where I got a pretty horrible Philly cheese-steak, and tried to decipher CanAzn’s drunk texts regarding the all night diner that his crew was currently at. In my state of mind, I assumed he was in this diner and yelled his name loudly for several minutes. This drew many odd looks.

We got back to the hotel around 4:00 AM, and collapsed into a 5 hour coma. We hit the road around 10:00 AM, and after a nice Subway stop in northern Missouri around 11:00, we were back in West Des Moines by 1:00, with only another 5 hours of driving up to Northern Iowa awaiting me. Despite the loss, it was a successful weekend, and a great time was had. WRNL wants to thank everyone who participated in a good time, and we apologize for all of the vuvuzela blasts in section C-7 of the Arrowhead parking lots.