Prior to every game WRNL will bring you the "Tailgate Preview". We’ll focus very little on the opponent or football in general and turn our efforts instead to how to get the most out of your tailgate experience. Truth be told, this article is basically just an excuse for me to find a couple of cleavage shots to share with you each week - you're welcome.

Once again WRNL tailgates in lot G7, just south of the Haunted Forest lot. Join us Saturday in preperation for Texas Tech.

Ah, the tailgate, a preparation of the mind, body and soul for the receiving of the gift of football. Any football fan worth their well-worn team jersey knows that the gameday experience is incomplete without the feasting, drinking and camaraderie of the tailgate event. In this series we’ll highlight a drink, some grub, and something to keep you busy between swallows … sinner. 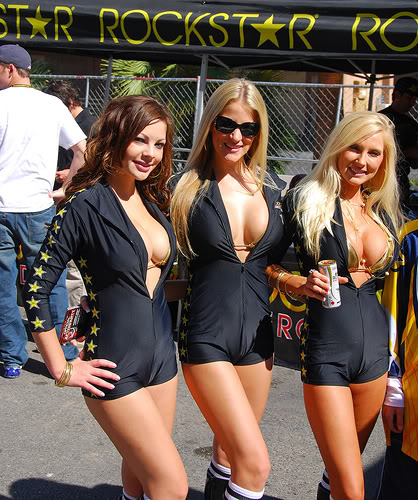 Well, I’ve been waiting for Iowa State to schedule a game in the morning to break out this next concoction – but it seems we’ve been blessed with a schedule full of night games. This drink is called the "Good morning, Sunshine" or the "Orange juice, Vodka & Rockstar". A distant and more sip-able cousin of the Jaeger and Red Bull, it's part wake-you-up, part mess-you-up and solid souce of vitamin C.

All you need is the following:

Combine to taste, more Rockstar if you’re extra sleepy, more vodka if you’re extra easy. Be sure to use the basic Rockstar in the black can or the diet version in the white can if you’re trying to lose a few. You may think Red Bull or Monster will make a decent substitute, but don’t do it – it has been tried and it has failed miserably. 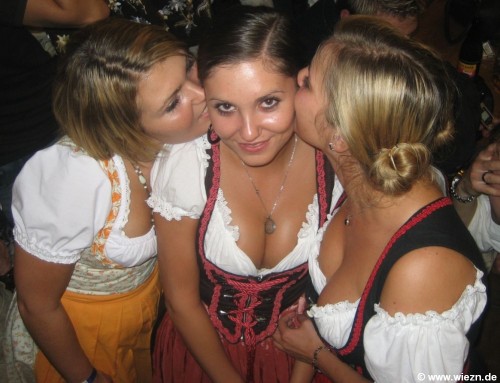 Bratwurst. We might as well break out a classic for Red Raider week - the brat is the tastiest of the meat-stuffed-intestine family of foods. The first brats hailed from Germany … as do the girls I’m featuring in the photo to the right, so that’s the connection.

Brats are basically just the grownup version of the hotdog. Flavors include: Cheese, Pineapple, Bacon & Beer. That’s right, beer is a flavor – it’s like the Germans somehow knew we would invent football, dispose of Hitler, and need something to chow on while waiting in a parking lot for a game to start. Silly all-knowing Germans…

To cook a brat put it on the grill, flip a few times, then take it off when its done … that’s pretty much it. If you need more help than that, your Mom is probably grilling for you anyway. Place brat in bun, add condiments, and consume. 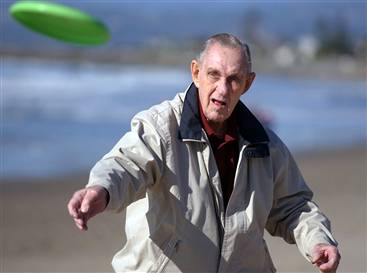 Polish Horseshoes. You've gotta love a game which includes the rule: Must be holding beer in hand at all times. Don’t look it up, I don’t care what Wikipedia says, that’s a hard and fast rule if you’re playing it in any respectable tailgating venue.

Polish Horseshoes was probably invented by someone from Colorado with its predominant "frisbee and white rich kids with dreads" culture. Unfortunately their rules were probably just: Throw frisbee, take bong hit, hire crappy football coach to take once proud football program to depths of despair and leave for Pac 10. Fortunately someone else decided the game needed less Boulder and more beer bottle catching.

To play you need a frisbee, the aforementioned beers to drink, two poles of some sort and a two empty bottles. Drive the poles into the ground about 10 yards apart – it’s best to play this in grass or dirt lots where pole placement is easiest. If you’re in a paved lot you’ll want to bring some sort of hammer-drill or small jack hammer and maybe some Quickcrete. Once the poles are set, balance a beer bottle atop each one, split into teams and take turns attempting to knock the bottle off the opponent’s pole. You score points if either an opponent fails to catch the frisbee, fails to catch a falling bottle, or otherwise sucks it up. Game over somewhere around 15 or 21-ish, it’s a drinking game – the rules are fuzzy and subject to change … except the hold your beer one, don’t even think about changing that one.