Read the disclaimer....now read it again. I should be following this advice. Since I haven't I'm now writing this article from a public library, public libraries are great filled with copious amounts of homeless men who use the bathroom to wash up and really enjoy watching yoga streams while rubbing themselves with a how to make homemade wine cookbook. Good stuff.

Both teams sucked last week. Both teams cost me money last week. The game this week is played at the Texas State Fairgrounds, so in true State Fair fashion we'll choose a winner by picking the fattest, trashiest, State Fairiest fan. Thanks google image search. The winner Texas.

You know what else you find at Libraries? Cool hipsters that check out DVDs and CDs because it's cool to support the local library. These people probably bought a lame t-shirt from one of the above mententioned schools too, posers. Then they go home or get on the inter-web and talk about how Wilco is so awesome and that mainstream music is just run by corporate America. Shut your vegan mouth hole! I wish NWA was still popping caps in people and selling music to white suburban kids. The artist formerly known as Prince kicks Wilco's indie hipster ass!

People that serve this fine country of our are awesome people let me get that out of the way. But....who in their right mind wants to join the Navy or Air Force. Lets think about this. Navy, you're stuck in a boat with a bunch dudes for 3 months at a time, then the ship gets to port and you have 24-48 hours to stick your Willy in whatever moves. Then if you don't get any you have to go back on the boat for another 3 months. Air Force; it sounds cool and all until you realize that only 1% really ever get to fly fight jets and shoot bombs and things like that, plus you can only write eat this Bin Laden on so many bombs before it gets old. Coin Toss on this one....I guess Air Force.

One thing I won't miss while I'm without cable is that ridiculous Washington State Cougars flag on ESPN's College Game Day. I wait for the day that some stupid hawkeye fans try to steal this "tradition" and claim it as their own as well. That's the day I start my career as a serial killer traveling week-to-week and off-ing who ever dare to raise a flag not playing at that stadium. Blow me Cougar flag barer. UCLA to cover.

Virginia is for lovers. Do you know how many times while typing up this little paragraph I've typed out Virgin,Vagina or Vir-gina (which would be an awesome stripper name). Virginia is for lovers but I'd love to love me some FSU girls. Florida State and their fine trim by more than a touchdown. 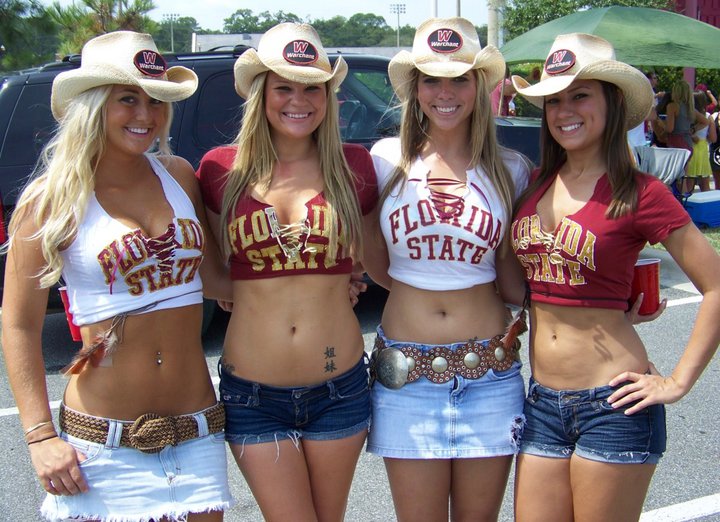 There really will be so much to laugh at if you choose to watch this game. One, JoePa...this man has to be wearing adult diapers by now doesn't he? Have you ever seen anyone over 70 be able to hold their bladder for more than 40 minutes tops? Lots of fiber in the morning, Joe don't want to soil yourself on national TV. Two, Iowa fans...this stupid fanbase will again try another lame attempt to copy other schools with their "stripe out" alternating black and gold sections. This will really confuse those who think its still hi-larry-ous to wear those stupid black and gold striped over-alls. Old man crapping his pants wins every time.

FoxSportsNet has to be kidding me! You chose to air this game?? I don't know if there could be a worse place to watch a game with a half-ass crowd that shows up 1 hour before the game. If I work for FSN I'm asking for the week off or calling in sick, Waco blows, plain and simple. I don't know how else to explain it. Waco and Baylor, you suck.

Anyone else love waiting for someone to get fired? I do, so do your bosses who are going to let you go this afternoon for reading this at work. Don't worry, just claim that your boss said he'd fire you if you didn't put his junk in a throat hold, a la Kevin Spacey in American Beauty (It works trust me...Hi Dave :o) I hope Dan Hawkins and Mark Reicht get fired during this game on the field at the same time, that would be fun! Georgia covers, barely.

I don't know why but when I hear these two schools, I imagine a big Klan rally taking place in some tree line parking lot and a grand wizard in full Alabama gear. Then I think what Tim Tebow would do if he caught wind of such deplorable acts. Would he swoop in and save the day? Or would he call Urban Meyer and have him send the team over let them go to town on those racist honkeys? I'd like to think it would be a combination of the two. No matter what Tim Tebow and JC come out on top.

The only thing that gives me joy these days are watching old Seneca Wallace video's and finding out that homeless men are more than willing to share a bottle of Mad Dog 20/20 in trade for a KFC moist toilette. I will learn from my homeless friends and dig up a couple hundred cans so I can put a little money down on this game. This will probably come back to bite me in my ass, I'll bet against the Clones in this game.

WRNL does not encourage illegal betting on games. Especially if you're going to use any of Steve Sanders picks. They're a one way ticket to getting both your legs broke and getting thrown out of a bookie's car while speeding down I-35!