WRNL was recently granted an interview with one of the top two Cyclone athlete-rappers ever. This is... count it, our second REAL interview. Just think, soon you'll see us walking around ISU media days schmoozing our players, blowup dolls in hand. We'd like to thank Allen Bell for taking the time, and hope he comes around several more times during the season. 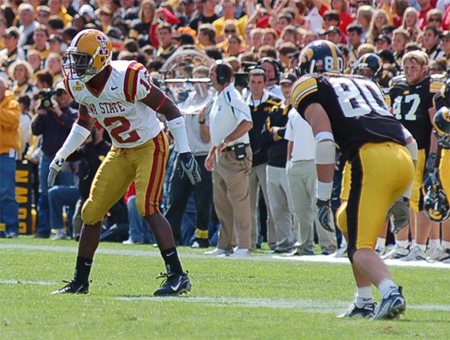 What have you been up to since playing at ISU? If you no longer live in Iowa, do you miss the winters here?

Since I left Iowa State, I've just been doing a lot of soul searching. Trying to find my niche. All while packing on the pounds. I recently became a father, I have a wonderful son. I'm currently teaching myself graphic design, and animation. It's funny, I read more now than I did the whole time I was at ISU. I have a lot of ideas in the planning stages that I'm working on now so just stay tuned. I don't live in Iowa anymore, got out of there as soon as I could. But I do miss the winter, or at least shooting my winter in Iowa videos. I made another one last winter that I never uploaded to Youtube. It might becoming soon.

Any jersey chaser stories you can tell without you or us getting arrested?

The best jersey chaser story I have is from my first year at Iowa State. The stories declined as my playing time did. There was a girl who's number I tried to get 3 weeks in a row at Sips and she kept shooting me down. Until I seen her out walking one night with her friends and she introduces me to them as Allen. They all asked what my last name was and I said "Bell." The chicks who's number I had been trying to get, EYES lit up. She was like "You're Allen Bell? All of a sudden you look taller!" Needless to say I felt special, until like 20mins later I seen her riding home with Ace.

Paul Rhoads vs. Gene Chizik in a cage match. Who you got?

I say Paul Rhoads wins! then he gets so happy he starts crying. Chizik will lose pretty bad but it won't matter, he'll just get a better job.

Who was your favorite teammate at Iowa State? Any funny stories involving them?

I had a bunch of favorite teammates at Iowa State. Devin, James, Quis, Blythe, Freddy G, Huston, Ace, D Sims, JJ Bass, Lyle, Bret, Flap, and Wier. Plenty more I can't think of at 2 A.M. Funniest story involving them would be the "GREEN BUS SCANDAL". I can't explain it but they all would know what I was talking about.

You're famous for the I-S.T.A.T.E. song. How much better is your rap than Notti Boy's? Why do fat white guys from Cedar Rapids rap anyway?

The I-S.T.A.T.E song is a thousand times better than "Notti Boy's". I feel like his song is just a second rate copy cat of our iconic song. He tried to outdo our song by shooting a video, featuring only himself (lame). I don't believe you can represent a team with just one person. Thats why our song featured so many different people. In hindsight, I don't think anyone who actually rapped on our song ended their career at I-State on a good note. So maybe Notti Boy is pretty smart because lord knows they don't need anymore trouble over at that school. I really don't know why fat white guys from Cedar Rapids try to rap. Maybe it's the water.

Harder question: You versus Lumas P in a rap battle. Who wins?

I honestly haven't had the pleasure of hearing any of Lumas P's songs. So I'll concede since he was one of the founding fathers of this game. I learned from the Ice-T - Soulja Boy beef. It never pays to battle with your elders.

What did you think of Iowa State's performance against Northern Illinois? Care to make a prediction for ISU's season record?

I thought ISU played a great game. I was extremely impressed with A-Rob and Arnaud. It also looked like the defense got a lot stronger too. I was glad to see a lot of the same guys holding their spots. That experience will pay off.

And of course, we can't let you go without asking.... Iowa vs Iowa State this week. Prediction/comments?