Compared to the rest of our media brethern we are a little late to the party, but we still want to offer our heartfelt congratulations to Auburn University on their National Championship.

Your recent victory has signaled a change in college athletics and has ushered in a new era of dominance in your sport. The pundits would be wrong to say otherwise. The accomplishments of these young men will stand for years while we debate their greatness compared to previously dominate teams of a different era.

We could not help but notice the shots from Auburn, Alabama last night and the obviously jubilation of your fans rejoicing in the news. Both you and your fans deserve to live in the moment and never forget the memories that you made on your journey towards greatness.

Once again we congratulate Auburn University on their 2009 National Championship in Men's Swimming and Diving. May the joy live with you forever. 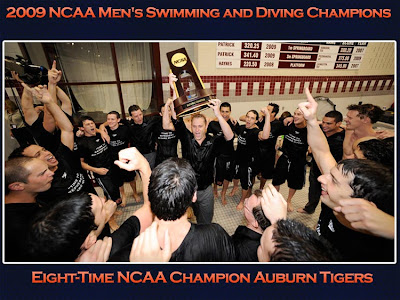