Remember in the movie Anchorman when Wes Mantooth tells Ron Burgundy how much he hates him, but God damn does he respect him? That basically sums up my feelings about Kansas.

It’s safe to say that the only thing I genuinely enjoy about the University of Kansas is this guy.

Despite all of that hatred, it’s hard not to respect their basketball program. Kansas has achieved. We’ll leave it at that.

Entering Wednesday’s game, it’s business as usual with Kansas. They’re 15-0 and are ranked #3 in the country. They’ve also recently been bolstered by the addition of freshman guard, Josh Selby, who sat out the first nine games of the season for being a naughty boy. Iowa State is going to have their hands full.

About Kansas
This team was good without Selby, and now that he’s finding his place in the Jayhawk offense, they’re a bonafied contender. They feature the inside duo of the Morris twins, Marcus and Markieff (or Mar-queef as I call him), along with Thomas Robinson. On the perimeter, junior Tyshawn Taylor is flanked by a couple senior guards in DUI specialist, Brady Morningstar and the greatest enigma in college basketball, Tyrel Reed. With a name like Tyrel, you’d think he’d have to be black, right? Wrong. He follows the long lineage of guys who you’d expect to be black, but are actually white, namely Joba Chamberlain and Carlton from Fresh Prince.

If there’s one thing this Kansas team does well, it’s make shots. They’re shooting 52.5% as a team for the year. Eight guys in their regular rotation are shooting above 50%, and that includes recently reinstated G Mario Little, who ya know, only roughed up his girlfriend and a couple KU baseball players in the last month.

Contesting shots and limiting opportunities inside will be key if the Cyclones want to win this game. 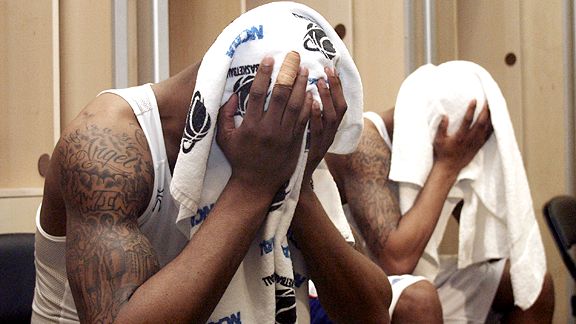 identical crying Impact Player for Kansas: F Marcus Morris
Selby is probably the guy to go with, but Morris has anchored this team all season and is a major match up problem. Physically, he can dominate a game inside, but has also shown nice touch from 3PT range, shooting at a 41.2% clip. Given Morris’ penchant for punching opposing players, The Mayor would be wise to send out a "goon" to provoke Morris into a fight, hoping to get him ejected. New walk on Andrew Mitchell seems to fit the bill. Make us proud Andrew, take a shiner for the team.

Keys to an Iowa State Victory
-Pressure the ball. This Kansas team lacks a dynamic point guard like Sherron Collins or Mario Chalmers. Tyshawn Taylor is not immune to turning the ball over and Selby can get careless at times.

-Dictate the pace of the game. The Mayor has to put everything in the hands of Diante Garrett and Jake Anderson. Kansas is built for the half court, but since they’ve added Selby, they’ve been able to force the fast break. Taking smart shots and adjusting to KU’s defensive pressure are two ways ISU will be able to manufacture points. Push it when it’s there, but don’t be afraid to run some half court sets.

-Feed off the crowd. There should be an excellent Cyclone turnout for the game and if a couple bounces go our way, embrace the Magic. 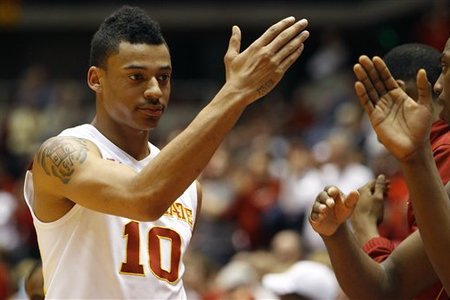 Diante, 1 armed man with freak sized right hand ... or maybe its just this picture - maybe.Impact Player for Iowa State: G Diante Garrett
I realize DG is the leading scorer and catalyst for this ISU team, but this is a game that he has to command and take over. Kansas is deep and experienced and on paper, should probably win this game comfortably, but the impact of a senior point guard of DG’s ability, can’t be understated. If the Cyclones are going to have a chance, it’s going to be because DG leads them there.

Unruly College Experience in Lawrence
A buddy and I scored free tickets for ISU’s game at #2 Kansas on February 19th, 2005, the last time Iowa State beat Kansas. Our plan was to crash with my buddy’s ex and party with her friends the night before the game. Party we did. I vaguely remember most of the night, but a few highlights included pissing off the ex’s roommate, who I thought was a bitch to begin with, but it probably didn’t help that I spilled beer all over her head. Apparently, I also slept naked in her bed and made out with some broad and woke up with stinky fingers. I also may have streaked down several dorm hallways and briefly was locked out of the room for trying to "pecker-slap" the girls.

Anyway, the game was surreal. If you’ve never been to a game in Lawrence, I highly recommend it. Stinson was incredible and it’s easily the best game I’ve ever been to.

Prediction
As I mentioned earlier, on paper, KU should win going away. ISU has dropped ten in a row to KU, and few have been close. Bill Self will sub frequently in the first half in order to keep his starters fresh for later in the game, when ISU’s starters figure to be tired. Getting out to a lead and going into the half with some confidence is going to be the Cyclone’s best bet. Kansas will go on a run in the second half and may even build a sizeable lead. When they do, moving the ball and taking smart shots will be the only way to get back into the game. It’s been a long time since a signature Hilton Magic moment and with Johnny Orr in the building, picking against Iowa State just feels wrong.