Coming off a gutty loss to #3 Kansas on Wednesday night, the Cyclones don’t get much of a chance to catch a breather. Baylor brings its 2-0 conference record (12-3 overall) into Hilton in what will be another tough match up against a team that will likely find its way back into the Top 25 at some point this season.

Warning: This preview may contain cheap shots at Baptists, dirty recruiting and chicks getting backdoored by bears, but it does not contain any takes regarding Branch Davidians or murder scandals that were covered up by basketball coaches. That’s low brow and we don’t need it. Besides, I just finished my theatrical production, loosely based on the Baylor men’s basketball murder scandal and Little Red Riding hood, titled Somebody’s Been Sleeping With My Bitch, Better Kill a Foo’. About Baylor
Baylor is led by senior sharpshooter, G LaceDarius Dunn. After missing the first three games of the season for rearranging his girlfriend’s jaw, Dunn is leading the Big 12 in scoring at 22.5 points per game, including 42.4% shooting from 3PT range. The Bears also feature an athletic front line with length galore. I’m pretty sure Jay Bilas’ head would explode just talking about Baylor’s length. Junior forwards, Quincy Acy (13.9 ppg) and Anthony Jones (8.2 ppg) check in at 6’7" and 6’10" respectively, but it’s 6’11" freshman, Perry Jones (13.3 ppg) that is the true star up front. Some say the young Jones might have been coerced into coming to Baylor due to some preferential treatment during his recruitment. WRNL has been told by a source who wished to remain anonymous that Jones got the "Jesus Shuttlesworth treatment" during a campus visit. If this is true, it’s tough to fault Jones for choosing a lame Baptist school in a town that sits smack dab in the middle of a dry county. As impressive as Jones’ on the court numbers have been, you have to think this guy is racking up Wilt Chamberlain type numbers off the court with all those white chicks in Waco. This is not shocking, given Jones’ size, as Baylor chicks have been known to offer up the old brown eye to the school mascot.

Spotlight Player: Baylor
This Baylor team is talented, that much is clear. If they have thoughts of a return trip to the Elite Elite, though, sophomore PG A.J. Walton is going to have to elevate his play. While Walton has potential, he’s not nearly the leader Tweety Carter was, but that’s not for lack of effort. It has been reported that in preparation for this season, Carter took Walton under his wing all last year and worked tirelessly to get him ready to take the reigns. They spent extra time in the gym. They roomed together on the road. They basically did everything short of getting BFF bracelets and riding a tandem bike to classes.

I mention Walton here, because Baylor has relied on their skill and athleticism up to this point this season. None of their losses are bad losses, but Walton hasn’t played particularly well in any of those contests. He hasn’t shown that "it" factor that Carter had. Limiting what Walton can create and forcing him away from getting the ball to Baylor’s scorers will be key for Iowa State to come away with a win. 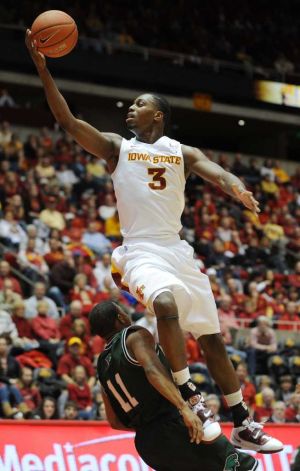 Keys to an Iowa State Victory
-Limit second chance points. As athletic as Baylor’s front line is, none of their bigs have the offensive creativity of a Kevin McHale. They get their points by attacking the offensive glass and dump offs from the guards.

-Don’t let LaceDarius Dunn touch the ball. Probably a tall task to ask, but if Dunn can’t get the ball, he can’t shoot it. Expect Jake Anderson to get in Dunn’s grill early and stay there all game.

-Who’s the third scoring option going to be? DG and JVB have been carrying the scoring load and ISU’s entire offense is dependent on the two-man game right now. With Scott Christopherson still not at 100%, Melvin Ejim and Anderson need to attack the basket and take the heat of DG and JVB.

Spotlight Player: Iowa State
If Iowa State is going to win this game, F Calvin Godfrey and F Jordan Railey have to combine for more than 12 minutes like the duo did on Wednesday night. JVB and Ejim are going to need a blow at some point and space to work on offense. Godfrey and Railey have to stay out of foul trouble and protect the glass. Both have shown they’re capable of putting together solid and productive stretches, but it’s tough to have any impact when they combine for 9 fouls in 12 minutes. Also, don’t be surprised if ISU goes big for long stretches in this game. I already touched on Baylor’s length in the post, and with ISU typically starting three guards, one team is going to have to adjust to the other. If Christopherson isn’t doing any better, he might be relegated to the bench in favor of Godfrey.


Suck on This Baylor
Since the inception of the Big 12, Baylor has yet to win a game in Hilton Coliseum. They are 0-7 in Ames.

Prediction
Depth wise, Baylor is not going to play more than 7-8 guys regularly, so in that respect, they’re no different than ISU. This game is really going to come down to who wants it more on the glass. As I mentioned earlier, limiting those second chance opportunities is crucial. This is a team that Iowa State can beat, but defensively, the Cyclones need to communicate and put a body on a man every time a shot goes up. ISU has a significant advantage at point guard and this team is confident. I think we’ll see a much better shooting night from ISU and an inspired effort on the boards.