Us too - luckily we have a crack team of interpreters here at WRNL, and we've broken it down for you. 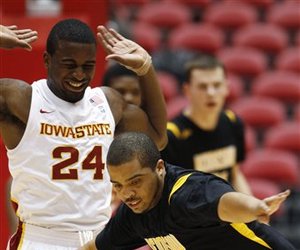 Draft Translation
"Some of my friends have been asking me ' DeMarcus, why haven't you gotten much playing time while at Iowa State'. I couldn't truly verbalize my frustrations to them at the time, but things are starting to look up. I've recently been contacted by Clemson, Iowa & Patrick Crayton. In addition, Iowa State has approached me about possibly working things out, but at this point in time I feel it's better if we go our separate ways. It's as if God is looking down upon me while I'm at these crossroads and I know he has my back ... and he wants me to get arrested."

Things are starting to make more sense here, but questions remain. First off, fuck off Iowa. Second, why is a second string WR on the Chargers contacting him? And third, most importantly, why does God want him arrested? We'll take these in order.

2) Craigton? Crayton? Creighton? I'm sure Dew-Kane is interested as well.

3) This was by far the most confusing, God for the most part, does not text message people to go get arrested. He's much more likely to forward a cheesey pope joke or tell you to start a holy war. So either God is telling DeMarcus to "be well-rested" ... or the big man's got DeMarc's back so much that he's like "get arrested - it won't matter, God's got this".