There are only three things I like about the state of Missouri. One is Kelly’s in Westport in Kansas City. Second, is the fact that you can get 50 McNuggets at McDonald’s for $9.99 (this really is a phenomenal deal, but does explain why there are so many obese Mizzou fans). Finally, as an Iowan, I have to appreciate a state that makes fireworks so readily available at the border, and for discount prices too. Other than that, I see no reason to show any love toward the "show me state". As they say, the shit flows south.

So on the eve of Saturday night’s battle between Iowa State and the #14 Missouri Tigers, I’ll admit that I’m less than thrilled. For starters, ISU hasn’t won in Columbia since Greg McDermott, if you can believe it, coached his first Big 12 game as the Cyclone’s coach in a 66-65 nailbiter in January 2007. Throw in the fact that ISU has dropped a couple heartbreaking contests at Mizzou in the last ten years, including the four overtime loss in 2001 and the double overtime loss in 2008, and current Tiger’s coach, Mike Anderson, is 7-1 against ISU (McDermott coached teams…thanks again Creighton), and it’s easy to see why the Missouri series has been a frustrating one. And if that wasn’t enough, this current Missouri team is pretty good.

The WRNL gang will be finishing up our WRNL Wing Challenge at Jethro's Drake around the time of tip, and after a full day of sampling the best wings Des Moines has to offer (and just a few beers), we’ll all be looking forward to the Cyclones bringing the storm down on Mizzou Arena (while we’re bring the storm down on the toilet). 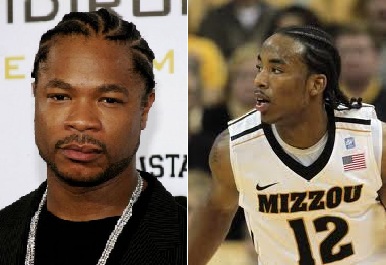 "40 minutes of hell" is what they call it, and they back it up. From the moment of the opening tip, Mizzou will play aggressive, trapping defense and they are relentless about it. They average over ten steals a game and thrive off getting their opponents out of their offensive sets and rushing their shots. The Tigers are led by junior G Marcus Denmon, who I think used to host Pimp My Ride, and is pacing the scoring for the Mizzou at 17.5 points per game, while shooting 49.5% from downtown. Denmon is joined by four other Tigers who are scoring in double figures for the nation’s fifth highest scoring team. In the front court, the addition of F Ricardo Ratliffe has bolstered a unit that returned F Laurence Bowers and F Justin Safford and improved Missouri’s scoring versatility.

The Tigers have a two-headed monster in the point guard spot. Sophomore Michael Dixon (10.7 ppg, 4.7 asst) is more than capable of running the show, but he might actually be less talented than super frosh Phil "Flip" Pressey (5.9 ppg, 3.7 asst). After breaking a bone in his hand and missing four games and sitting out most of the Colorado loss, Pressey has come on strong in the last two contests, chipping in 16 points on 4-4 3PT shooting against Texas A&M and 13 points on 3-5 3PT shooting against Kansas State. Missouri decided one Pressey wasn’t enough, so they brought in his older brother (which means he gets the top bunk), Matt, who’s been a solid role player for Mizzou as well.

-Don’t turn the ball over. Missouri lives off of turnovers and ISU has to take care of the ball better than they did down the stretch against Oklahoma State to have a chance.

-Shoot the ball well. A given for this ISU team, but in Missouri’s three loses, their opponents have scored 111 (Georgetown in OT), 89 (Colorado) and 91 (Texas A&M in OT) points.

-Play with composure down the stretch. In four of ISU’s five losses, the Cyclones have either been tied or held a lead in the last minute of the game. Careless mistakes and bad execution has led to frustrating losses. If the Cyclones are in this game, they have to close it out in the final minutes.

Look no further than G Scott Christopherson. This is one of those games where Iowa State needs Scotty to light it up. Missouri might face-guard Scotty, but if they don’t, their trapping defense will allow for open shots, but ISU has to make smart passes and find ways to get Scotty open and get him the ball. Having made some clutch 3’s already this year, the Cyclones will need a few more if they’re going to pull the upset.

Does anyone else think Mike Anderson looks a little like Danny Glover? Can’t you just see Anderson looking over at an assistant coach after a tough loss and saying, "I’m too old for this shit, Riggs"?.

On paper, ISU should not win this game, but here's what they have to do to pull the upset.

The court is 94 feet long and Missouri is going to make Iowa State use every inch of it. From the moment ISU inbounds the ball, Diante Garrett and others are going to have to take care of the ball, make smart passes and find open areas in the Tiger press. Being a guard oriented team, I think ISU can protect the rock and beat the press, but the Cyclones have to be careful not to rush the 3PT shots that will be available once they do. Yes, ISU will need to shoot the ball well from outside to beat Missouri, but sometimes, the first shot isn’t always the best shot against the Tiger’s defense. Their traps can be beat by making the extra pass and finding guys in the paint. The soft spots in the defense will be the corner 3’s and the blocks. They also can be beat on back door cuts as they usually over pursue. Look for Iowa State to exploit these open spots and manufacture baskets in those areas.

The Cyclones have played with surprising confidence on the road and as I pointed out earlier, have had the lead or been tied in the final minute in each of the three road losses. I think we see nothing different here, except the hot shooting of Scott Christopherson puts ISU over the top and springs the upset.