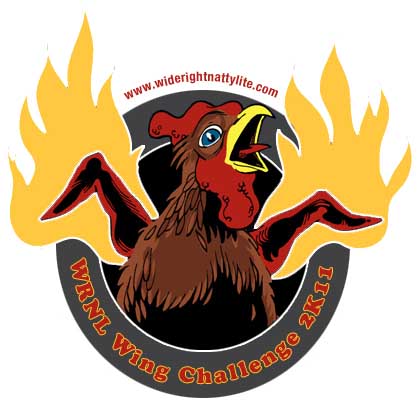 The WRNL Wing Challenge 2011 is in the books.  We toured the following establishments (in no particular order): Gerris, Victors, Jethros, Trophys, Chicken Coop, Court Ave Brewing Co., & AK O’Connors to try to find the best wing they had to offer.  We are still compiling the results, so sites will remain anonymous, but we wanted to get you a run down of the day’s events.

This weekend a conspicuously male-dominated group of WRNL staffers and associated hangers-on descended on the Des Moines metro looking for the best chicken wing we could find.  Confidence reigned early on, as we reviewed the master plan to try both a traditional buffalo hot wing and a house specialty wing at seven area locations.  There’s no way this could fail.

Bar 1
There are nine of us to start, number nine being a hawk fan – there’s always one.  He agrees to keep silent and stare at the floor a lot, so we reluctantly agree to let him stay.  A couple suckers agree to drive so the rest of us order another pitcher in celebration.  When we ask for a recommended "house special" the waitresses reply is "Most people can’t handle what I eat" … we giggle like schoolgirls.  It's gonna be a good day.

Bar 2
This place looks a little ritzy for us – someone in a suit jacket gives us an odd look as we come in.  We nervously stay close to the bar, as it’s a familiar lover.

WRNL writer Norman tells the waitress taking our drink order that he’ll order with the bartender, she replies in an exasperated tone "you guys are literally my only table, this is what I do!"  Hilarity ensues as he backpedals quickly.  She now owns him.

We only have three dozen wings as they only come in 1 flavor – we feel pretty girly about it. 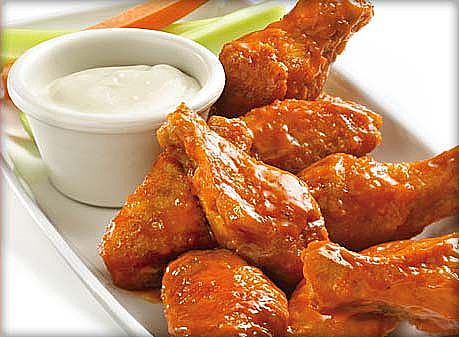 Bar 3
Now this is more like it, I heard someone got shot here.  The wings are ordered by the pound and they come all on one gigantic platter.  Some dude asks us to try some nuts he wants to "sell on the internet".  We are suspicious, so we pass the nuts to the guys at the other end of the table.  They devour them unsuspectingly, but luck out and survive – apparently nut guy was legit.

5 lbs of wings are knocked down.  A few new faces join the tour and a couple of us in for the long haul begin to ponder if seven locations was a good idea.

Bar 4
Someone has warned them of our arrival – wings and beer greet us at a reserved table.  Three flavors, somewhere around 60 wings, and one sauce which is troublingly named "Angry" are consumed and rated.

At this point some guys look a little off-center.  Uneasy discussions about what dropping a #2 is going to feel like start to dominate the conversations.  We agree to take the long way to the next bar so WRNL MBB expert CylentButDeadly can go home to "let the dogs out".

We suspect this means one of three things:
-> His ladyfriend is aroused at the sight of drunks covered in wing sauce and wants 5 mins of his best alone time action
-> He’s going to break the seal on the back door and wants a familiar drop site.
-> He actually owns dogs that need letting out.

Bar 5
The group is getting pretty big now 16 or 17 people put down another 60 wings.  The waitress likes the Dreamy shirts and is soon clad in a beauty of her own.  Everyone is jonesing for something that’s not a chicken wing.  People talk lustily about an order of french fries, but claim to want to wait until the end.   Whatever, I’m all chicken today.

This is the first location that takes a little effort to wipe out the whole order, we think we got a few extras – but we power through.

Bar 6
At least three people take their first wing-fueled dumps of day at this bar … we apologize to bar 6.  One WRNL staffer flushes at least four times and causes several others to evacuate the men’s room.

It’s been about seven hours since this started and people are starting to look a little weary.  Somehow WRNL’s only Canadian-citizen-of-Asian-descent looks fresh.  He is in the lead for number of wings for the day at almost 40, and shows no signs of slowing down.  CanAzn is not a big man, though he’s kicking the ass of several of them, including mine.

Two large orders of wings are consumed as we feel we’re nearing the home stretch. 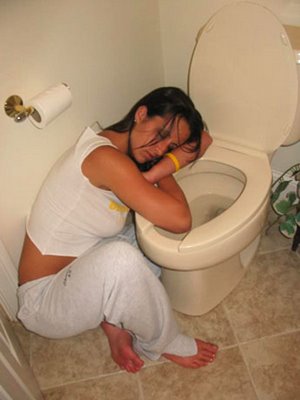 Bar 7
Somehow we have twenty-five people that need to squeeze into an already busy bar and we only have a fifteen person table reserved.  It’s tight – but most everyone is in a celebratory mood.

Then the ISU / Mizzou game tips off.  Ugh.

We knock out two more flavors and discuss how awesome we are while trying to avert our eyes from the score at the bottom of the screen.  By the time the game ends we’ve put a solid 11 hours, 7 stops, & 376 hot wings behind us.  Remarkably, some move on for more drinking (minus the chicken wings) I’m beat so I limp home.

24 hours later I’m almost back to normal – I’ve felt every flavor again on the way out and it’s been vicious… but I’m sure the memories made will make all the back door molestation worth it.