Opening the WRNL Vault: Part I

Share All sharing options for: Opening the WRNL Vault: Part I 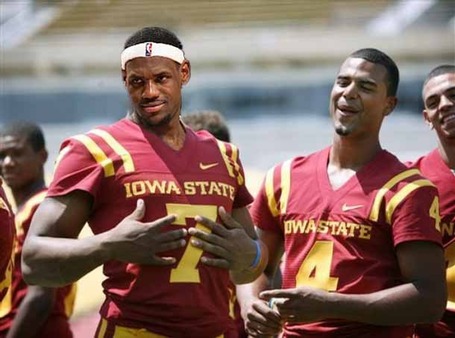 As mentioned last week, we are going to take a stroll down memory lane occasionally so those of you new to our fine musings can see our earlier work.

This article was originally written by CanAzn prior to The Decision but with the NBA canceling the first two weeks of the season it seems all the more fitting.  Plus we could use more help on offense, right?  Full article after the jump.

Link (Note that it's on our old WordPress site! For those of you not in the know, we are on our third format in just 18 months.)

Media walking around the Bergstrom indoor training facility Tuesday were surprised to find a unrecognized athlete on the field laughing it up with quarterback Austen Arnaud. Observers noted that the previously unseen team member bore a striking resemblance to notable NBA free agent LeBron James. When approached, the new #7 confirmed that he was in fact, Lebron James, and released the following statement:

"I’d like to announce that I am foregoing NBA free agency and taking a break from basketball. This whole being pursued thing is getting old. James Dolan from the Knicks called me so many times that I got 3 new numbers, and yet he still found each new one. I would like to follow in Michael Jordan’s footsteps and take a couple of years off and try a new sport.

"Various coaches have been in contact with me, but when coach Paul Rhoads called with an offer to play both ways as a linebacker and tight end for the Iowa State football team, I realized it was the perfect opportunity for me. I missed the whole college experience and this is a way for me to enjoy college while dishing out some punishment, which is appealing after having so many NBA players hack the living crap out of me. Coach Rhoads says that he will utilize a new play called "just throw the ball to Bron Bron" to help with my dislike of learning the playbook. On defense I will have no defensive responsibilities except as the rover, running around and hitting whoever has the ball.

"My entourage told me that I’d probably find Ames boring, but then again, I’m from Cleveland. Iowa rivers may flood often, but at least they aren’t so polluted all the fish have aids. Craig Brackins also called me and told me that Ames had the hottest college chicks between the Mississippi and Missouri rivers. Not saying I’m going to do anything about it, because I’m the cleanest NBAer this side of Shane Battier, but some nice scenery ain’t bad at all. In fact, I’m already planning to bring the computer engineering department into my entourage so I can dump these girls on them so that they actually get some contact with females before they graduate.

"I filled my paperwork for admission last week with Iowa State and they accepted me this morning. I look forward to many field goal post dunks after touchdowns this season. Ames had a Mayor already, now it has a King!"