Share All sharing options for: A Different Missouri: Defense > Offense 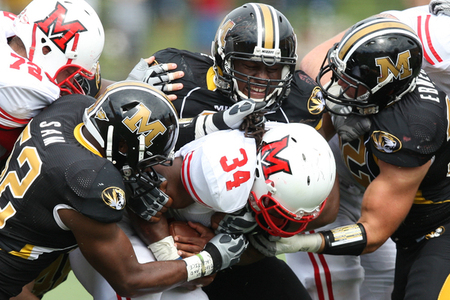 From Brad Smith to Chase Daniel to Jeremy Maclin to Denario Alexander to Blaine Gabbert the stamp of Gary Pinkel on the Missouri program has been on the offensive side of the ball.  The spread attack, offensive line splits that appear you could drive a truck through, receivers everywhere, and points galore.

With James Franklin taking the reigns as a starting quarterback for the first time and a difficult schedule to this point the Tigers have struggled to a 2-3 record.  Their three losses have come to Arizona State on the road, Oklahoma on the road, and Kansas State on the road; not exactly bad losses.

Outside of the 69-0 shellacking that Missouri put on Western Illinois the Tigers are averaging just 23 points per game.  Only one of those games resulted in a win, a 17-6 win over Miami (OH) to open the season.  That is a bit of a different result than the past few years with Pinkel and his visor at the helm.

All season long at www.encyclonepedia.com I have been tracking offensive and defensive stats for Big 12 teams of a different variety.  By figuring the number of possessions and starting field position you can calculate the potential yards to be gained in a game if every yard that can be gained is gained.  Then by dividing the actual number of yards gained in the game you can figure the percentage of potential yards that were gained.  The theory is that the percentage of potential yards gained is more of a level playing field to compare than just raw yardage gained.

Additionally, by figuring the number of drives with touchdowns, field goals, and turnovers I am tracking the percentage of time that each result occurs.  Along those lines the main factor that I'm using to separate the teams from each other is the total number of points scored divided by the number of possessions to figure points per drive.

So, how does this apply to the upcoming game with Missouri?

Thus far through the season the Missouri offense is just seventh in the conference by averaging 2.52 points per possession.  They are also seventh in percentage of possessions that result in touchdowns with 29.7%.  Seventh is not the place that Missouri has typically found themselves amongst Big 12 teams with their offensive production.

Conversely, their defense has been quite strong through five games this year.  Missouri's defense is currently third in the Big 12 by giving up just 1.59 points per possession.  The Tigers are also fifth in percentage of drives allowing touchdowns by allowing teams to reach then endzone on just 21.2% of drives.

Over the course of the Paul Rhoads era in Ames he has faced two strong Missouri teams but has had a couple of close games that the Tigers had to battle out for victory.  In 2009, ISU fell to the Tigers down in Columbia by a score of 34-24 while losing 14-0 last year in Ames.  Both games resulted in double digit losses but in both games the Cyclones were right there with a chance to win the game in the fourth quarter.

In a bit of a quirky note, over the last eight meetings with Missouri, ISU has averaged scoring 13.75 points in the four home games and 16.6 points in the four road games.  The Cyclones scoring offense has been able to put more points on the board in Columbia than in Ames.

Both the Tigers and Cyclones are entering the game off of two conference losses in desperate need of a win.  For Iowa State, this is one of the games that is most winnable of its remaining road games where one or two road wins must be found to reach bowl eligibility.

Reaching the six win mark is the goal but right now the season that got off to a fast 3-0 start needs to avoid spiraling out of control.  That process starts with a win on Saturday.