Share All sharing options for: 2011 Game 6: Iowa State vs Missouri

Last week’s game against Baylor was a mixed bag of progress and concern over the rest of the 2011 season.  James White is emerging as a consistent running back with big play ability and Darius Reynolds is earning his place on the Biletnikoff Award Watch List.

There were small alarms that make any astute fan concerned about the Cyclones’ chances to go to a bowl game though.  The offense was still too inconsistent with either a scoring drive or a short three to five play drive that immediately put the defense back on the field.  The defensive line got pressure when fresh but wore down by the second quarter.  And finally, the referees made multiple questionable calls that did not decide the outcome of the game but certainly did not make the already uphill battle any easier.

My gripe is not so much with the referees but rather the replay officials.  Throughout every conference the officials are stretching what it means to have "indisputable video evidence" to overturn a call.  How Jeff Woody can be called for a touchdown but ruled short of the goal line on a review with a bad angle and how Robert Griffin III’s fumble was ruled as an incomplete pass are two opposite ends of the spectrum and make you seriously question what these guys in the booth are watching and thinking when seeing these plays.

Enough of those gripes thought.  Now it’s on to Columbia where Missouri plays host on their 100th Homecoming to Iowa State.  As anyone who knows me outside of this web site knows, this has been my upset pick since the spring.

And despite the last few weeks, that isn’t changing.

Behind a poor second quarter and untimely errors, Iowa State fell to Baylor 49-26.  Terrance Ganaway bruised an Iowa State defense determined to stop the pass and rumbled for 200 yards and three touchdowns.  Robert Griffin III was held to his lowest output of the season with 212 yards while going 22 of 30.  Despite allowing 603 total yards of offense the Cyclones defense illustrated their ability to remove a facet of the game and that will be key this week and next.

For the second week in a row Kansas State knocked off a better team at home by downing Missouri 24-17.  Two fourth quarter touchdowns by Missouri was not enough to overcome the slow start by James Franklin and Henry Josey.  A Missouri team amassing over 200 yards per game rushing was held to 112 by a surprisingly stout Kansas State defense.

Iowa State vs Missouri: A History

Missouri holds the all-time series record with a mark of 60-33-9 and has won the last four straight.  The last time the Cyclones beat the Tigers was in Dan McCarney’s final game in 2006 with a late goal line stop of Chase Daniel.  The Cyclones have not won in Columbia since 2001 when a late Adam Runk interception sealed the 20-14 victory.

As mentioned above, Iowa State cleaned up a lot on offense last week.  Fewer penalties occurred and the Cyclones only turned the ball over twice.  What remains is cleaning up the timing of the turnovers.  Jantz’s later interception is a given due to the urgency in the 4th quarter and how the game was already out of reach.  However, his fumble when down 28-14 and inside Baylor’s five yard line was a backbreaker.  The ensuing touchdown off the return created a 14-point swing that Iowa State is not equipped to come back from.   Keep in mind, Jantz has only started 16 football games at quarterback ever.  He only can go up from here and that’s a very, very good thing for Iowa State. 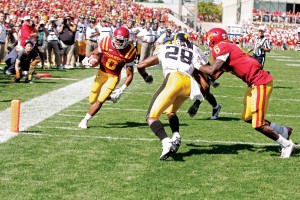 Missouri’s defense is stout again this year, as Kirk Haaland’s excellent analysis points out.  What is amazing about the stats in the article is how little things changed when facing BCS opponents.  I originally felt Missouri padded those stats against Eastern Illinois and Miami(OH) but as it turns out factoring in BCS opponents changes very little.   Against BCS opponents the Missouri defense has faced 38 total possessions and allowed 13 touchdowns and 99 points.  That amounts to 2.6 points per drive and touchdowns on 34% of the drives.  As mentioned above, not a significant change from the overall numbers.

What does this mean for this game?  Essentially another turnover free game and eating up yards between the 20s will be huge.  While Iowa State ranks 114th nationally in red zone offense by converting 21 drives into 14 scores (eight passing touchdowns, five rushing touchdowns and one field goal) a lot of that is driven by turnovers.  Only one of those failed conversions is from a missed field goal.  The rest are from putting the ball on the turf.  Just like Iowa State benefitted from an absurd amount of fumble recoveries in 2009 and 2010 the amount of times they put the ball on the turf in 2011 is almost as absurd.

Missouri’s pass defense ranks in the bottom 1/3 of the NCAA and is exploitable to both the deep ball and passes underneath.  No doubt that Missouri will bring a similar game plan as the last three opponents and sell out to stop the run.  As long as Steele Jantz gets into a rhythm early Iowa State will find their yards.  Tom Herman’s passing play calling has been relatively spot on this year, and it was against Missouri last year, but the biggest difference will be whether or not the man under center can deliver.

James Franklin is Robert Griffin III and Austen Arnaud all rolled into one.  I love Austen, and he was a great Cyclone and still a wonderful ambassador for the university, but three coaches during his tenure caused his fundamentals to be all over the place.  Franklin has benefited from having one coach (David Yost) but his fundamentals are terribly flawed.  Low release, carries the ball low when he scrambles, throws off his back foot and consistently throws late over the middle. 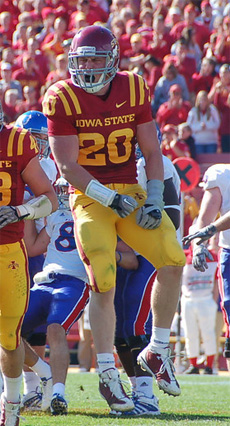 The Griffin comparison comes from his running ability, which is no slouch.  He brings a much different dimension than Chase Daniel and Blaine Gabbert did.  He has been involved in some way in almost 75% of Missouri’s offensive plays this year and it shows no signs of slowing.  However, at some point as the defenses he faces start to match his skill level he will find it tough sledding to hang onto the ball that much.

Missouri will attempt to stretch the game downfield and over the middle and then use Henry Josey to get to the outside.  Kansas State did a great job last week keeping Posey and Franklin from busting big runs to the outside and was content to allow yards to be piled up between the 20s; just like they did against Baylor.  Again, where it changed was inside the 20 and the good news for the Cyclones is they currently rank 33rd in red zone defense allowing 17 scores on 22 possessions.  Helping this statistic is of those 17 scores, nine have come on the ground, which Missouri struggles with on a shorter field.

The three keys to slow down this Missouri offense will be to: contain James Franklin in the pocket, keep passes over the middle to the minimum and win the battle up front in the red zone.

Grant Mahoney missed two extra points against Baylor. While Missouri kicker, and former All-American, Grant Ressel was 1/3 on field goals against Kansas State and 7/13 on the year.

WRNL Lead Pipe Action Prediction: Current Season 2-2-1: One turnover this week on a long throw on 3rd down.

50/50 Prediction: Current Season 0-5: Aaron Horne scores his first touchdown as a Cyclone.  Has to happen one of these games, right?

Unlikely to Happen but We’ll Light a Dumpster on Fire if it Does: Current Season 2-3: Leonard Johnson deserves a pick six and should have had one last year against Missouri.

Missouri is a solid team but their offensive puzzle is beginning to be solved by opposing defensive coordinators.  When Navy unveiled a three man front against the Tigers in the 2009 Texas Bowl everyone took notice.  David Yost struggles with in game adjustments and up until this year had an uncanny ability to refuse to call run plays.  Things are changing in Columbia but Oklahoma and Kansas State yet again showed three man fronts on defense on their way to a victory.  This essentially negates the wide splits that Missouri uses and forces the linemen to make early decisions on what gaps they are blocking.  Wally Burnham exploited this last year and will certainly do it again on Saturday. 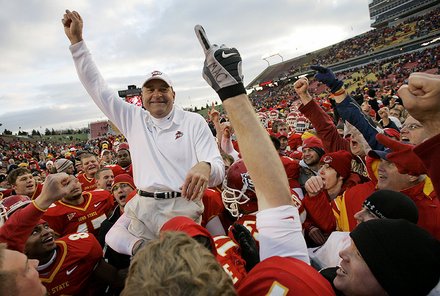 On defense the Tigers are still very stout up front and play an aggressive downhill style similar to UConn and Texas.  As the season wears on the Cyclones have been better equipped to handle this style and Jantz is learning to step up in the pocket and keep his eyes downfield.  If the Cyclone offensive line can continue to buy time for Jantz he will be finding Reynolds and Josh Lenz on a consistent basis tomorrow.

What needs to change more than anything is execution on first and second down and playing into a positive situation on the "money down".  As Mark Kieffer wrote this week, the Cyclones are struggling early in drives and it is carrying over through the rest of the drive and ultimately putting the defense on the field early and often.

Paul Rhoads and Tom Herman are both on record in regards to winning the time of possession battle going forward and look for the team to come out and execute early with high percentage throws and more use of the zone read.  The zone read was around early against Baylor and the Cyclones benefitted but as a whole has been disappearing slowly from the Cyclones repertoire.  Fortunately Missouri is so aggressive that keepers and misdirection plays have shown to be a problem for them against both Oklahoma and Kansas State.

The Cyclones have too much talent to be sitting home this winter and the pieces are starting to come together slowly.  Both teams have suffered rough losses the last two weeks and will be hungry for a win, but I feel Rhoads circles the wagons much better than Gary Pinkel does.

Sorry to spoil your 100th Homecoming Missouri but a Cyclone is ready to blow through town and maul that pretty little mascot of yours.

PS – Missouri is favored by 14.5 points.  Even if I didn’t pick the upset, I would still pick the Cyclones to cover.