ISU MBB Media Day... This Is Probably Why We Weren't Invited

Share All sharing options for: ISU MBB Media Day... This Is Probably Why We Weren't Invited 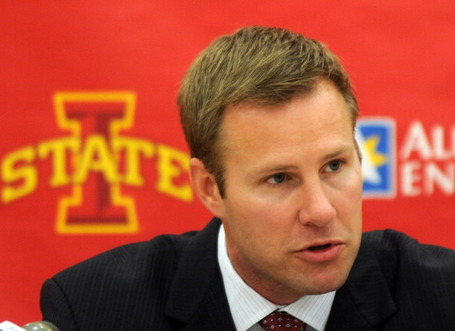 Did we gripe about it and take it personally? Of course not. Did we swear off ISU athletics and turn our allegiance elsewhere? That's just laughable. Did it bum us out that we didn't get the opportunity to hang out in the parking lot by The Mayor's car and then ask him if he wanted to hang out and come over for a sleepover and play some video games and stay up late and watch rented movies and eat pizza and drink soda and then sneak out late at night and go TP-ing? The answer is no, but we already ask him that every Tuesday night anyway, so that wasn't a big deal.

Anyway, WRNL's press pass was denied, but we still felt we owed it to our readers to post the questions that we would have asked.

Scott Christopherson: As the only white guy on the team, do you feel compelled to wear a bathing suit in the shower and exactly what type of hog does Royce White have on him?

Fred Hoiberg: Will you have sex with my girlfriend...and is it okay if I film it? Also, that sleepover offer is redeemable at ANY time. Should I tell my mom to bust out the sleeping bags?

Jordan Railey: I'm not sure if you're a hunter, but if you were, would you say "fowl" would be the most likely game you'd hunt? Also, have you ever fouled out of a game of HORSE?

Bubu Palo: Have you ever considered growing out the puff and going with the Wesley Snipes "Demolition Man" haircut? Would you consider it? Please? Just for us?

Tavon Sledge: Have you ever asked a girl, "Are you ready to get hammered by The Sledge?"

Melvin Ejim: When ISU makes the NCAA tournament this year, will your Canadian popularity level rise to the Terrance & Phillip/Bryan Adams strata? 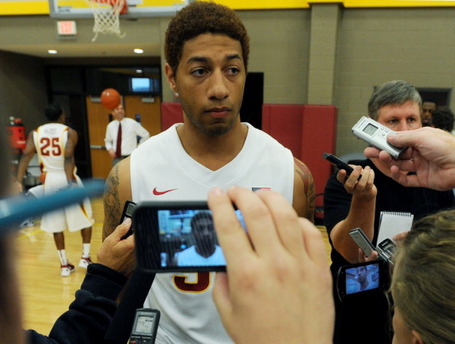 Royce White: Paul Blart: Mall Cop, probably isn't in your Netflix Queue, is it? Second question; it's been pretty well documented that you averaged a triple-double in the Capitol City League this past summer, but what about your pursuit of the off-court triple-double (10+ Sorority chicks from 10+ different houses in 10+ different positions)? Is that an attainable goal or have the fans manufactured too lofty of expectations for you?

Last, Scott Christopherson told us you had a "state-fair worthy hog", and our female readers would like some confirmation. Yes or no?

Percy Gibson and Anthony Booker: I don't really have a question for you guys, but I just want you to make me forget about Calvin Godfrey. By the way, have you heard from him? Is he okay? Does he need some money or anything?

Chris Allen: Tom Izzo told WRNL that you left him for a, "younger, better looking coach". Is your only regret that you couldn't have done it sooner?