Goodbye to Texas (A&M) University: A Study in Dishonesty, Hypocrisy, and Insanity

Share All sharing options for: Goodbye to Texas (A&M) University: A Study in Dishonesty, Hypocrisy, and Insanity

"An Aggie does not lie, cheat or steal, or tolerate those who do."

This is the Texas A&M University Honor Code.  According to the University’s compliance office, "The Aggie Code of Honor affirms values that apply to students, faculty and staff alike. This simple statement exemplifies two of our core values—excellence and integrity—and underscores our commitment to ethical conduct and compliance with laws and official policies. These core values forge a strong base to embrace our other core values of leadership, loyalty, respect and selfless service."

Unless, of course, you’re talking about how they deal with other Universities that they were supposed to be partners with.

When Texas A&M signed on to the Big 12 following the near conference blow-up in 2010, they made an explicit promise that they were committed to the Big 12 Conference, and the fellow member schools.  Yet, at that very same moment, they were engaged in talks with Southeastern Conference officials about trying to leave the Big 12 for that same league.

Webster’s Dictionary defines "lie" as "1) to make an untrue statement with intent to deceive; 2) to create a false or misleading impression".  This is exactly what Texas A&M University did when they signed on the Big 12’s dotted line, knowing full well that the University of Texas was going to get its own television network.  They told the Big 12 they were committed while they were talking with SEC officials about trying to get out of the league.

Clearly, the University doesn’t think too highly of their Honor Code.

Now that A&M is on their way out the door, I just wanted to take one last one shot.  I went to College Station once, and really enjoyed myself.  The Aggie fans I met that day were nice people and fun to be around.

But God damn it, do I hate A&M today.

Texas A&M has been, without a doubt in my mind, the most deplorable actor in all of this Big 12 realignment saga.  Say what you will about the University of Texas (and there isn’t any doubt that they are as arrogant and selfish as they come, and hold a large percentage of the blame for Big 12 instability), but they are still here.  They have made concessions to make the Big 12 stronger, and they have actually engaged the rest of their conference mates to find a solution that works for all of us.

A&M on the other hand has done just the opposite.  For years they voted against equal revenue sharing in the Big 12 alongside Nebraska, Oklahoma, and Texas.  They have been just as ruthless in holding the rest of the league down as evil Texas.  When Texas approached them about starting a network together, they bailed on the idea.  When the Longhorn Network was announced, rather than approach the rest of the Big 12 about starting a network that excluded Texas, they continued down their path of self-destruction with the SEC.

A&M sits back and tells people how Texas has all the power and doesn’t behave like a conference partner.  This just falls on to deaf ears.  If A&M had voted for equal revenue sharing Texas wouldn’t have to power they have today.  A&M has also not behaved like a conference partner at any point.  They have become fully consumed by their hatred of Texas, and have gone to a path of cutting off their nose to spite their face.  A&M never reached out to their fellow Big 12 schools to strengthen the league.  It was very much the opposite.  By pursuing and landing in the SEC, Texas A&M has single-handedly threatened to destroy the athletic departments of schools like Baylor, K-State, Iowa State, Kansas, and Texas Tech.  While it is likely that most of these schools will continue to remain in an auto-qualifying league, A&M’s selfishness and stupidity has put all of that into continued jeopardy, and for what gain? 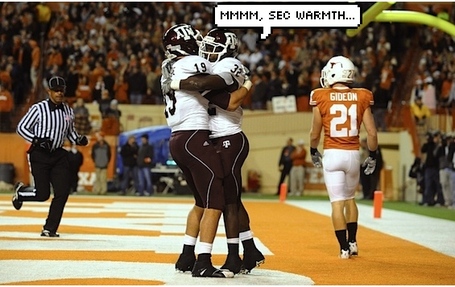 A&M will tell you this is about "doing what’s best for Texas A&M" and that this move is designed to give them a stable home.  Way to piss on our legs and tell us it’s raining, assholes.  The numbers are out there:  Texas A&M will make a negligible financial gain in the SEC in terms of TV revenues.  With Texas A&M, the Big 12 had a shot at a massive TV contract (and will likely still receive one).  In the SEC A&M will also have a much more difficult time fielding a competitive squad.  Right now they compete with Texas and Oklahoma for Texas recruits.  Now they run the risk of opening those recruits to other perennial powers such as Alabama, Auburn, Florida, Georgia, and whatever flavor of the year exists (see: Mississippi State).  Some people think that being the Texas school in the SEC will give A&M a recruiting advantage.  This of course relies on the false premise that an 18 year old high school kid has the same kind of boner for the SEC that the national media.  Do they really think that a recruiting pitch of "Hey, come to A&M!  Win 6 games a year!  Listen to our fans chant ‘SEC!  SEC!  SEC!’" is going to be more effective than "Hey, come to Austin or Norman.  Play for National Championships."?  No way in hell.

As far as stability goes, that’s another ridiculous argument out of A&M.  No matter what, a school the size of A&M, in a state the size of Texas, with a fan base that puts 70,000+ into their football stadium is ALWAYS going to have a home in the highest level of college football.  Not to mention, A&M’s bailing for the SEC was a major source of the Big 12’s current instability.  Oklahoma's flirtation with the Pac 12 was a direct result of that.  They clearly weren’t concerned about the LHN, as they wanted Texas to come with them.  In an even more ridiculous turn of events, A&M’s leaders have attacked Baylor for breaking an agreement not to sue A&M for breaking their Big 12 contract.  Hello?  McFly?  You are mad at Baylor for reserving their right to sue you after you breached a contract with them?  Jesus fucking Christ.  It’s the absolute definition of hypocrisy.

Good bye to texas university
So long to the orange and the white
Good luck to dear old Texas Aggies
They are the boys who show the real old fight
'the eyes of Texas are upon you'
That is the song they sing so well
Sounds Like Hell
So good bye to texas university
We're gonna beat you all to Chigaroogarem
Chigaroogarem
Rough, Tough, Real stuff, Texas A&M

As stupid as this sounds when they’re playing every other school on their schedule, it’s going to be even dumber (what the hell does "chigaroogarem" mean?) when they never play Texas again.

Are these people insane?  The answer, Virginia, is "yes".  At the end of the day, none of this should surprise anyone.  Texas A&M is a place where wildly misplaced priorities have informed many of their decisions.  For example, the University did not integrate racially until it was forced to by Congress in 1964.  It did not integrate on a gender basis until 1965.  Their Corps of Cadets, a semi-ROTC group that acts like their an actual service academy, was known to participate in the tradition of "Redpots".  The night before an Aggie football game, the Corps would burn a large bonfire.  Often, a Mason jar full of Corps member’s semen, i.e., a "redpot", was placed on to the bonfire.  Only COC members and women who had slept with them were allowed within a certain radius of the burning jar.  Any woman who tried to stand inside the circle was violently shoved to the ground.  I, for one, am glad that Iowa State University will no longer be associated with a place that so willingly goes against their stated values, and whose unstated values are so far out of whack with what we value here.

So, A&M, have fun in the SECSECSEC.  Take comfort in knowing that even when your Fightin’ Texas Aggies are getting their brains stomped in by LSU that you can do that stupid ass chant.  You are hypocritical, dishonest, and demented.  You value giving Texas the middle finger more than you value success on the field, or being a good conference partner.  We’re going to be fine, even though you tried to kill us.

Go fuck yourself.  Into a giant Mason jar.