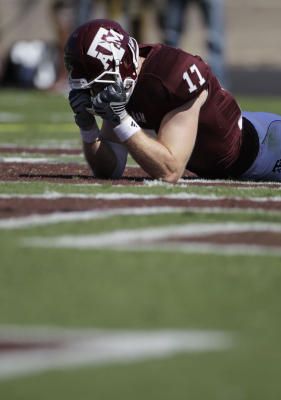 We all know that Texas A&M is leaving for the supposedly greener pastures of the SEC and that their imminent entry into the conference will signal another conference for the Aggies to dominate..

We give to you Great Moments in Big 12 History: A&M Edition

In the 15 completed seasons of Big 12 play Texas A&M has finished the season as one of the top three programs twice, both coming in the late 1990s. In fact, the Aggies average finish is a middling 6th place behind such powerhouse programs as Kansas State & Texas Tech. Over the course of 15 seasons Texas A&M isn’t even the SECOND best program in the state.

The Aggies have played in a bowl game in a somewhat solid 10 of the last 15 seasons. However, that’s where the good feelings stop – for their trouble the fake militia owns one bowl trophy. That’s right one, as in 1-9 in bowl games – and that one is from the 2001GalleryFurniture.com Bowl. Just for reference, the Cyclones and Jayhawks are next in line with three bowl wins a piece over the same time period, including an Orange Bowl victory by the Jayhawks in 2008. In fact Baylor is the only Big 12 program with fewer bowl victories than Texas A&M. 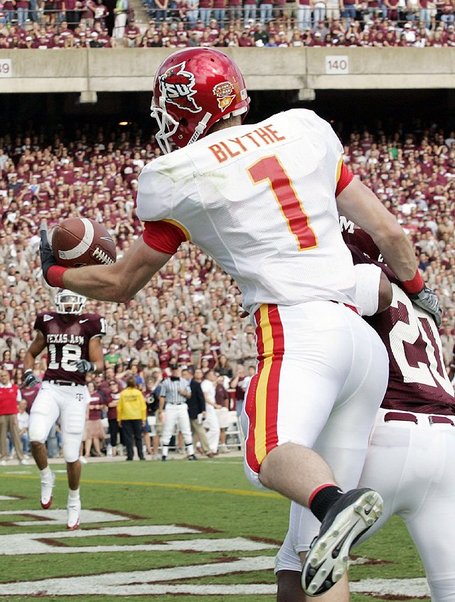 
The Cyclones have only beaten Texas A&M once in Big 12 conference play, but damn was it sweet. Blythe went off for 214 yards off eight big receptions - half of which went for touchdowns. The Cyclones dominated the game winning 42-14, which is a term not often reserved for Cyclone victories.

The Aggies have never won a Big 12 regular season or tournament title in basketball, in fact they only have five total wins in the Big 12 tournament total. Were it not for Baylor sucking in solidarity, Texas A&M would own every Big 12 mark for hoops futility.

Texas A&M has exactly one National Championship in football to their name. In 1939, which was probably before the forward pass so who really cares. They do however hold 13 National Championships across all sports –which is roughly equivalent to Kansas’ 12 and well on the way to Iowa State's 19.

The Aggies own 7 of 15 Big 12 Soccer titles. Como es hombres si bueno soccer burrito. They fucking own that shit – suck it Longhorns.

We bid you adieu Texas A&M, may the fruits of your labor in the SEC result in middle of the road finishes, even fewer national titles and maybe a couple extra bucks lying around to wipe your tears with.