Share All sharing options for: An Aggie in Ames (or Crossing the Hate Bridge) and Other Stuff

After my earlier hate rant about Texas A&M and their move out of the Big 12 (none of which I'm going to take back), I thought I'd hit up one of our Aggie followers, @InsideTAMU to chat ISU/A&M, share a story about his epic adventure to Ames in 2000, and gain further understanding into our perspective on conference realignment while sharing his own.  Well, for as much I had blasted A&M, I felt it was only fair to do some positive coverage.  After all, I had an incredibly good visit to College Station in 2009, and really had a blast with a lot of the Aggies I met down there (you can read about WRNL's invasion of College Station here).  So if you want more further proof that Cyclones and Aggies CAN get along (and actually got along quite famously, hence some of our bitterness about their departure) then....

The following is the unfiltered account of @InsideTAMU's infamous road trip to Ames.  It is a study in alcoholism, irresponsibility, and booze cruising that any hardened Iowa native Cyclone can appreciate:

So I tied one on Thursday Night my Freshmen Year.....

...at A&M.  I close down the bars and a buddy and I decide that we are going to Iowa.  So we go to our dorm to get shit together and he blacks out drunk and passes out so, I say fuck it, jump in my truck, and head up Hwy 6 to I-35.  Remember, this is in a time when most people did not have cellphones.So I finally get halfway sober in OKC, decide that isn't cool, and stop in between OKC and Wichita to get beer.   As you can imagine, I'm 18 in one of the lamest states in the Union, so basically I use a fake ID and a bribe to get a case of Keystone (3.2 shit) in Oklahoma.So I'm avoiding a hangover, and driving and drinking, and basically being a dumbass 18 year old.  I finally arrive in Ames early evening and park in your Downtown (EDITOR'S NOTE:  we are unsure if he means Downtown or Campustown) with nowhere to stay and no plans.  I look like shit.

So a group of guys are approaching me, and talking a little light trash, to which I respond "I just got done driving 17 hours hammered off my ass and with no friends here, so I'm ready to either get severely smashed or fall face first into a waitress."  Well, the SAE's I had just met at ISU, took a likening to my trip and took me in.  I raged on alcohol and Midwestern girls for the next 36 hours, but in that time, I was given shelter, ran up a $180 tab in Campustown, which is hard considering how cheap shit is there, and remember sliding through the mud half naked in the student tailgating area.  I know the Aggies around me in the game were wondering why the fuck I was covered in mud, blood and was smoking Marlboro Reds in the stands, but I think they understood when all I could mumble was "fuck yeah" at everything going on.I arrived back in College Station on Monday morning at 530 am, in time to go take my 2nd test of the fall semester at 8 am.  My roommate thought I was kidnapped or dead and was ready to call my parents to check if they had heard anything.  Luckily, he held off on the hope that I was stupid enough to drive to Iowa and back by myself.  He knew me well, and I still have a scar on my left bicep to this day.  What from? I have no fucking clue.

Clearly, this guy fits into the Cyclone ethos.

We picked each other's brains a little more, and I was able to get some good nuggets about how visiting fans perceive Ames from the conversation:

Norman:  Have you ever seen so many goddamn cornfields in your life?

InsideTAMU:  God, my eyes bled from OKC to Ames.

InsideTAMU:  I tailgated in a grassy mud pit that smelled of booze, Marlboro reds, corn and blonde sluts.

Norman:  What bars did you hit?

InsideTAMU:   I think it was called Campustown and the only bar I can remember was called something like Tip Top or Top of the Stairs or some shit like that.

Norman:  How were you treated in general by ISU fans?

InsideTAMU:  Fucking awesome... when they heard my story of getting up there, I was treated like a king.

Norman:  Would you recommend the Ames/ISU experience to others?

InsideTAMU:  Absolutely, best tailgating in the Big 12 North, and some of the friendliest people along with Nebraska and KState.

After this exchange, we turned the tables a bit, as I satisfied his non-sexual curiosities about Iowa State.

InsideTAMU:  What is your favorite Big 12 road trip?

Norman:  It's going to pain you to hear it, but Austin.  College Station is a lot of fun, but I like the live music scene in Austin, and I like how laid back the UT fans seemed. There were lots of fun Aggies, but there plenty with sticks shoved straight up their asses. As a whole, even the older Horns were pretty fun. College Station would be an easy #2, followed by Columbia, Manhattan, Lincoln, and Waco. Nothing will ever be worse than Waco. College Station's tailgate set up is the best I've seen outside of Ames.

InsideTAMU:  Is the ISU fanbase pissed about the A&M move to the SEC?

Norman:  Absolutely.  We look at it like a bunch of kids whining about having an Xbox 360 instead of a PS3 when we're still playing PS2.  A&M had a good thing going in the Big 12 and jeopardized a lot of our universities futures to get what looks to us like a different deal, and not a better one.  I guess to sum it up as succinctly as possible, it feels to us that A&M put us all in jeopardy on the basis of pride.  If the Big 12 goes on to survive, and I think it will with the potential Big East raid, those hard feelings go away and someday A&M might be a lot of ISU fans' favorite SEC team.

Norman:   Iowa City has more women.  This is a product of the traditional majors between the two schools. That gap has really narrowed in recent years, but its still there.  In Iowa City it's more about the bar scene, and people get really dressed up to go to expensive bars full of douche bags from Chicago. Many U of I students are from the Chicago suburbs and were unable to get into Illinois or Northwestern, so they come to Iowa. ISU is mostly native Iowans. Thus, Iowa City has more of a reputation as the party town. But anyone who has spent time in Ames knows that no one drinks like ISU. In Iowa City, it's all about being seen at a certain bar, but ISU has for years been more into the house party scene. It's less obvious to a stranger just driving around, but it's there.  Get a bunch of kegs, spread the word, charge $5 a cup and just get after it

InsideTAMU:  Are you a "fuck the B1G" type of guy?

Norman:  No. I think their on-field product is crap and they are overrated every year. However, I'd love for ISU to be in that league, and based on a lot of things people have thrown around, if the B1G ever got to 16, ISU could be one of those 4 added, especially with Mizzou likely off the table. Our academic research brings as much money to that league as some schools TV sets might. It's just not something the media would ever think about it.

The rest of the conversation was mostly a discussion of what would happen on the field and a very rational debate between both sides about the A&M to SEC move. InsideTAMU pointed out that one economic benefit of the SEC move that no one is discussing is the boon to the College Station area when SEC fans come to town. Generally, 7000 SEC fans travel to road games, as compared to the 4000 (and often less, for example there were only 900 Baylor fans) in the Big 12. I pointed out to him that the move to the SEC was as much of a luxury as anything for TAMU, while it legitimately threatened schools like ISU/KU/KSU/Baylor/Tech's athletic existence, which is something not many Aggie fans had thought about. All in all it was a good exchange, and hopefully one you find entertaining and maybe slightly informative. 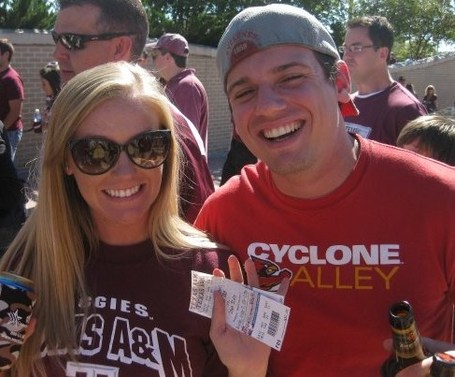 See, Cyclones and Aggies CAN get along.