Before we start the preview, take the time to watch the Gameday Hit Tape.  It's worth it for the last 30 seconds alone.

Not much to preview this week.  It’s hard to come up with a reasonable breakdown that is not full of superlatives when the home team has lost three straight by an average of 27 points and the visiting team is ranked in the Top 20 and finally playing complete football games.

With that being said, I urge anyone on the fence about attending this game to buy tickets, come to Ames, tailgate and help the local economy.  It should be a perfect day for football with a high in the low 60s and stranger things have happened in college football than a .500 team upsetting a Top 20 team.

Steele Jantz fumbled the ball on Iowa State’s first series and Missouri was up 14-0 before six minutes had come off the clock.  Despite the third TAINT of his career, A.J. Klein’s performance was not enough to bring the Cyclones back as they trailed 31-10 at halftime and finally fell 52-17.  Jared Barnett looked decent in his relief of Jantz and went three of eight for 25 yards and ran the ball four times for 21 yards while leading the Cyclone offense to their only touchdown of the day.

Texas A&M rode a career day from Ryan Tannehill (415 yards passing and six touchdown passes) to pull away from Baylor late, 55-28.  The Aggie rushing attack still amassed 266 yards for a whopping 681 yards of total offense.  The carries were split between Christine Michael (21 for 105 yards and a touchdown) and Cyrus Gray (12 for 42 yards) with Tannehill adding another 55 yards on five attempts.

Iowa State is 1-9 all-time against Texas A&M with the lone win a memorable 42-14 shellacking of the Aggies in College Station in 2005.  Todd Blythe and the late Stevie Hicks combined to score all six of Iowa State’s touchdowns with Blythe catching four and Hicks running in two. 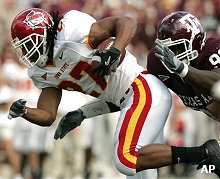 Much has been made of the newly reopened quarterback battle between Jantz and Barnett and I would expect to see both on Saturday.  Jantz should get the start but his leash will be incredibly short if he continues to turn the ball over on the first or second series of the game.  For the most part the offensive stats have been good enough to keep the Cyclones in each game this season but the turnover machine that is Jantz is putting our already banged up and tired defense into hole after hole.

While Texas A&M’s pass defense is ranked very poorly (as in, dead last, even behind Kansas) there is a misnomer to it.  The Aggies 3-4 defense is designed to stop the run and force teams to throw the ball.  However, they’ve already faced two prolific quarterbacks in Brandon Weeden and Robert Griffin III and a yardage consuming monster in Arkansas.  Unfortunately Iowa State’s offense is not cut out for those type of games.  This defense also ranks first nationally in sacks with 26 through six games so there must be something going right. 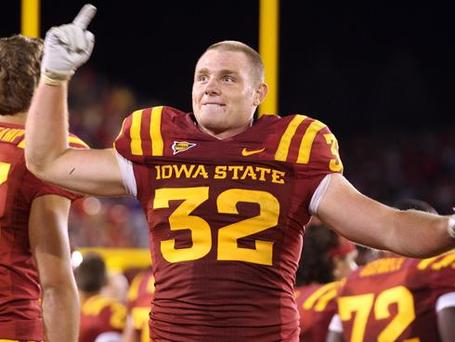 I see two keys for this game.  The first, get the ball into Darius Reynolds’ hands, do it in any way possible.  Wildcat, jet sweeps, short passes, deep passes; it doesn’t matter.  Give the man the damn ball.  Missouri clearly did not respect the passing game enough to play a safety over the top on him yet he only came away with two catches last week.  To be successful he needs a minimum of ten targets/touches in this game.  Maybe even in the first half.

The second key will be more running between the tackles.  This has changed tremendously since Shontrelle Johnson went down and is a good way to keep the Aggie defense honest.  Especially if a combination of Jeff Woody and James White is used.  Woody is good against tired defenses late in drives and late in games and needs to see the field more.

Stop someone, anyone, please.  Iowa State has been susceptible to the run (to put it politely) the last three games and is facing a team ranked 16th nationally with 227.67 yards per game on the ground.  The saving grace for this is A&M uses a more traditional pro style set for their run game and it is something the Iowa State defense has had success facing earlier this year.

Tannehill is a threat to both run and pass but is clearly a pass first quarterback and is not cut from the same cloth as James Franklin or Robert Griffin III.  Tannehill can beat you with his feet if he needs to but clearly is a better thrower.  Obviously Jeff Fuller is going to be a handful for Leonard Johnson and Ryan Swope is dangerous over the middle, but the Cyclones need to focus on stopping the run and bowing up in the red zone.

The key is to get big up front, put the secondary players on an island (everyone says they can handle it, even the coaches, so it’s time to put up or shut up) and see if this A&M offense can be slowed down and forced into some early turnovers.

This week in Kicker Rehab: Zach Guyer.  Guyer made both extra points last week and converted on a 26-yard field goal attempt in the first quarter.  Good enough for me.

The kick return unit continues to excel even with the loss of Shontrelle Johnson and now ranks 39th overall with an average return of 23.06 yards.  Jarvis West has proven to be a good option beside Josh Lenz and broke a 51-yard return against Missouri that was promptly met with a three and out. 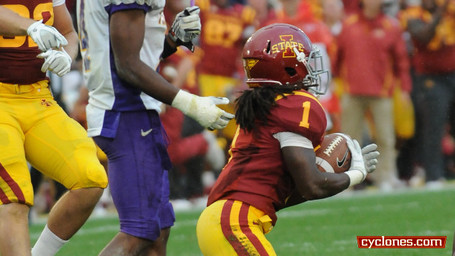 WRNL Lead Pipe Action Prediction: Current Season 2-3-1: Aaron Horne DOES NOT score his first touchdown as a Cyclone.  See what I did there?

Unlikely to Happen but We’ll Light a Dumpster on Fire if it Does: Current Season 2-4: A win would be nice.  Any old win against anyone.  Beating a Top 20 team would just be extra gasoline on top of the dumpster.

Texas A&M turned a major corner last week when they burned Baylor with 31 second half points.  The Aggies are a solid team that underachieved with their two second half meltdowns against Oklahoma State and Arkansas but still managed to take them to the wire.  Weapons galore exist on this team and Wally Burnham will try to find a way to balance taking away one facet of the game and not allowing another to set records.

Offensively the Cyclones are in a funk that I have not seen since at least 2006.  The yards are there but the ball security is not and it’s a surprise to see such carelessness coming from a Paul Rhoads’ coached club.  For all the good things Jantz does you feel that the demeanor everyone praised in training camp and the start of the season just does not mesh with the demeanor needed to protect the football.  Jantz is essentially a freshman with the lack of experience he has from high school through junior college and to Iowa State and he is playing exactly like one.

Like every game before this the Cyclones need a fast start both offensively and defensively.  This team is not built to come back from anything more than ten points and a hole bigger than that was dug against Texas and Missouri with disastrous results.  There is no doubt in my mind that the Cyclones will score some points tomorrow but at what cost?  If those points are late in the game after giving the ball away three times then they mean nothing.  However, if they come early and are from the defense generating turnovers like last week, then watch out, we might have a game.

Unfortunately we are far enough into the season now to know what type of team we have and it’s one that does not respond to adversity well.  Iowa State drops their record against departing Big XII teams to 0-3.