No Mountaineer is an Island: Four Reasons Why the Big XII Needs More Big East Teams

Share All sharing options for: No Mountaineer is an Island: Four Reasons Why the Big XII Needs More Big East Teams 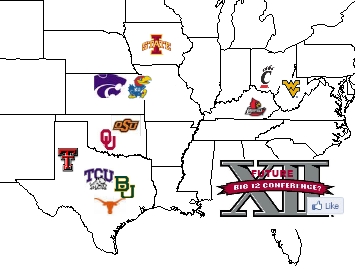 The Big XII announced yesterday that West Virginia would be replacing Missouri when they ultimately join the SEC. This was cause for much celebration on campuses around the Big XII, because A) the Big XII was finally being proactive regarding conference realignment and B) when the West Virginia Mountaineers join your conference, you'd goddamn better throw a good riot. But it also caused a little head scratching, due to the isolation and small market size of West Virginia. In fact, the Big XII would be extremely short-sighted to only take West Virginia and remain at ten teams. Here are four reasons why:

1) Country roads, take me home ('cause I just traveled halfway across the country to go play a women's volleyball game): Look at that picture up there. Doesn't West Virginia look lonely all by itself? Currently, the closest Big XII school to Morgantown is Iowa State, just a short 871 mile drive up I-80. The next closest? Kansas, exactly 900 miles away. In fact, the average travel distance from West Virginia to their new conference partners is 1,151 miles. This is not a recipe for a happy conference member. When your team has to get on a plane for every single conference game, that's going to add to your travel costs, recruiting budget and time away from the classroom for student athletes (Note: Last item may not be an issue for West Virginia).

By adding two more Big East teams in addition to West Virginia (say, Louisville & Cincinnati), the Big XII could bridge the gap between its farthest flung conference member and old members. The old Big East teams would still be on an island, but at least they'd be on that island together. And as anyone who read 'Robinson Crusoe' in grade school knows, you always need an ally on an island to help you fight off cannibals, hunt for food and stave off jungle madness. Think of Louisville & Cincinnati as West Virginia's pal Friday.

2) (Fox) got a TV eye on me: When the Big XII lost Missouri to the SEC, they lost more than a good football program, decent basketball program and great meth supplier. The Big XII also lost their biggest media market outside of Texas in St. Louis. When Texas A&M left, this wasn't an issue, because Texas, Texas Tech & Baylor (but mainly Texas) already have the Texas TV markets locked up. Losing the St. Louis market to the SEC is a bigger blow to the Big XII's television prospects.

Now, the Big XII is effectively swapping West Virginia for Missouri. In athletic terms, it's a neutral trade; possibly an upgrade. In academic terms, slight downgrade. In the size of the media market? HUGE downgrade. By adding West Virginia, the Big XII is only gaining the 38th most populous state in the Union, the 65th largest TV market but losing the 21st largest TV market.

This doesn't really matter for the Big XII's current TV contract, but it could impact the upcoming tier-one TV contract that's going to be negotiatied in 2015-2016. If networks percieve the Big XII to be lacking in value/viewers/eyeballs, the size of the renegotiated contract will likely be smaller than it could have been. And when Big XII members are unhappy about money in the conference, they tend to throw shit fits and look for the nearest exit.

The addition of current Big East members Louisville and Cincinnati would help the Big XII's sagging TV numbers in two ways. First, by adding the 48th largest TV market in Louisville and the 35th largest TV market in Cincinnati. This isn't a huge addition, because it can be argued that Louisville & Cincinnati don't really deliver those markets. But more importantly, adding Louisville and Cincinatti DO get the Big XII back to 12 teams; allowing the conference name to make sense again and giving the Big XII back a championship game. The money that a lucrative championship game would bring could help offset the cost of adding two more members to the conference.

3) "It's not the size of the boat, it's the motion of the ocean." That's a damn lie and you know it: The ACC & SEC currently have 14 members. The Big 10 and Pac 12 have 12 members. The C-USA/Mountain West/Sun Beast abomination could have up to 32 members. A ten-team football conference just isn't viable anymore. If the Big XII wants to compete for national championships and be considered the equal of the afore-mentioned leagues, they have to add at least two more members.

Additionally, the Big XII is in a precarious position geographically. It's penned in on all sides by the murderous Mongol hordes of the SEC to the East, the beserker Larry Scott viking mob to the West, and the Fighting Jim Delaney's to the North (who engage in behavior too sick and twisted to be recounted here). So short of building a wall to keep the barbarians away from the conference, the Big XII needs to add teams to insulate itself against future raids.

4) Round-robin schedules SUUUUUUUUCCCKKKK: This has been a rough year for Iowa State football. That's just a fact. But one of the reasons that Iowa State has struggled so much is that their schedule includes four top ten teams and eight teams in the top 30. For Iowa State, a team ranked 62nd in the latest Sagarin ratings, that schedule is a backbreaker.

So for completely selfish reasons, as an Iowa State fan you should really want the Big XII to get back to 12 teams and divisional play. Adding beatable teams like Louisville and Cincinnati will ease Iowa State's schedule, plus hopefully space out the inevitable ass-whippings by Oklahoma to once every few years.

Again, congratulations to the Big XII for finally doing SOMETHING about this wobbling Jenga tower of a conference. But if the Big XII stops at ten members by only adding TCU & WVU, expect this conference to remain unstable for the forseeable future.