Share All sharing options for: An ADD Proof Guide To Big 12 Basketball

Interested in what Big 12 basketball looks like in 2011-2012 but too lazy to read full articles? Lucky for you, here's an ADD proof guide to the Big 12. One school, one sentence. 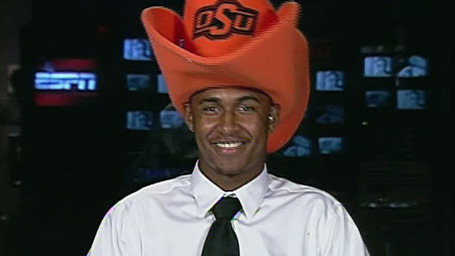 This guy with the goofy hat is probably your Big 12 newcomer of the year.

Kansas State: Will Frank Martin have an aneurysm and beat Bill Snyder to the grave?

Kansas: With Tyrel Reed and Brady Morningstar both graduating, which douchey white guy will step up for the Jayhawks this year?

Mizzou: Will they declare SEC membership before or after Frank Haith gets destroyed by the NCAA?

Oklahoma: Which no name player will have a career game against Iowa State this year, then never be heard from again?
Oklahoma State: I still hate Keiton Paige.
Iowa State: Will any opposing players announce their transfer to Iowa State in the middle of a game?
Texas: Which unprepared Longhorn player will declare for the NBA after another early tournament exit?
Texas Tech: Will the team suck badly enough to drive Billy Gillispie to pick up DUI #283525?