Share All sharing options for: The Big 12's Offensive Assault

It has been chronicled repeatedly.  It has been stated ad nauseum.  Yet, the proof is in the pudding.

As ranked by the NCAA in Total Offense (measured by average yards per game) there are four Big 12 teams (Baylor, Oklahoma State, Oklahoma, and Texas Tech) that occupy the top five slots, six (Texas A&M) in the top seven, and seven (Missouri) of the top 12.  If you exclude the non-BCS schools it is even more dramatic: 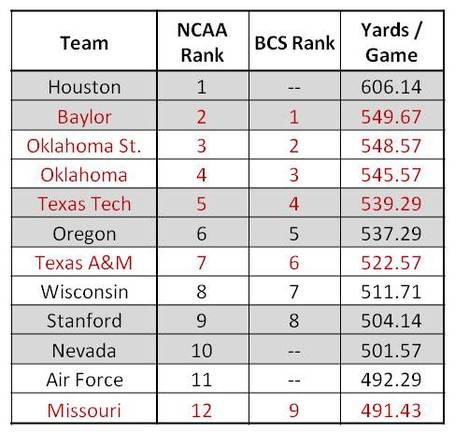 Of course, the objective of football isn't to gain yards; it's to score points.  When looking at touchdowns scored per game the numbers drop a tiny bit, but are still very impressive.  In that category the Big 12 has the 3rd, 5th, 6th, 7th, and 13th ranked offenses among BCS schools. 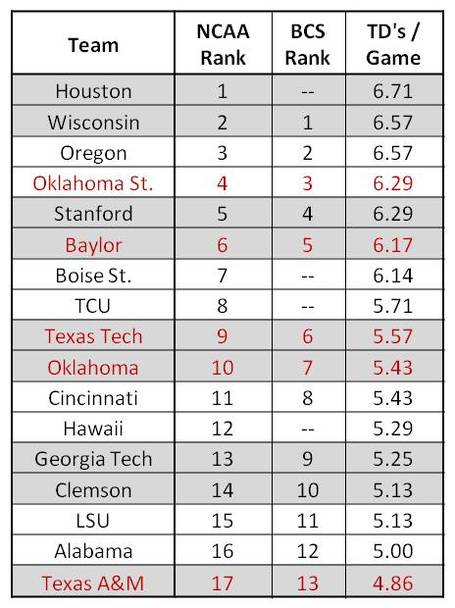 Still not too shabby.

But what is about the Big 12 offenses that has made them so much better and so much more productive than every other league, especially the BCS leagues?

Think Grinnell College basketball.  You know the team that tries to shoot and force the other team to shoot as fast as possible so that the number of offensive possessions is maximized.  Where scoring is outrageously high even if shooting percentages are mostly mediocre.

What I found is that it isn't that the Big 12 offenses are necessarily any "better" than their counterparts; they're just "faster".

When the raw numbers of yards per game are reduced down to a more level playing field (not that every variable is removed because that is borderline impossible) and we look at yards per play, then only five of the top 15 BCS schools hail from the Big 12.  But now, they are ranked as 2nd, 8th, 9th, 12th, and 15th. 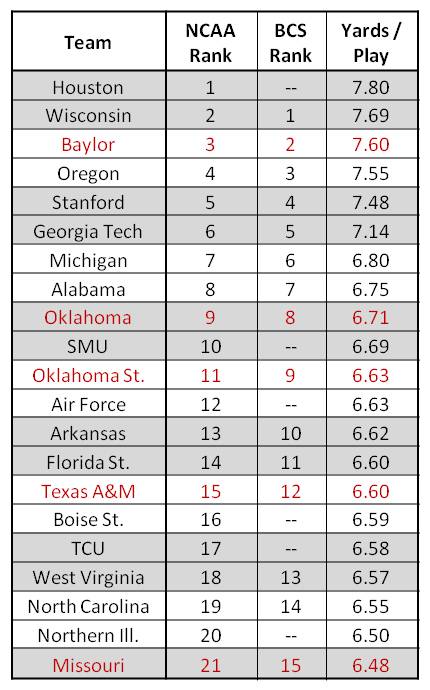 While the Big 12's rankings aren't quite as astounding when looking at yards per play instead of yards per game, five of the top 15 BCS teams (and 21 in the NCAA) is still better than every other BCS league.  In the top 15 of BCS yards per play gainers you have the Big 12 with five, the ACC with three (Georgia Tech, Florida State, and North Carolina), The Big Ten with two (Wisconsin and Michigan), The Pac 12 with two (Oregon and Stanford), the SEC with two (Alabama and Arkansas), and the Big East with one (West Virginia).

This is where the fast pace comes into play.  Many of the offenses in the Big 12 are "shotgun and spread you out with four or five receivers" and play up-tempo throughout the game.

When you look at plays per game for the offensives the pieces fit together.  Four of the top six offenses in the NCAA for plays per game are from the Big 12.  That alone is impressive.  But six of the top 15 teams in the NCAA (or top nine BCS teams) are all Big 12 schools.  As the NCAA rankings go:  1st (Texas Tech), 2nd (Oklahoma State), 4th (Oklahoma), 6th (Texas A&M), 13th (Iowa State), and 15th (Missouri). 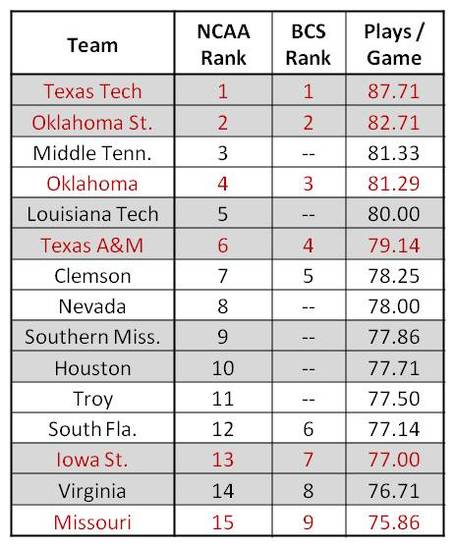 The plays per game for the top nine teams range from 87.71 plays down to 75.86.  While the offenses themselves are talented the audacious raw offensive numbers are also a function to the offenses taking so many snaps.

While that just highlighted the six Big 12 schools in the top nine of BCS schools the next three Big 12 schools are not far behind coming in at 28th (Texas), 29th (Kansas), and 35th (Baylor).

Obviously these rankings have no direct correlation to success in any league, let alone the Big 12.  The 7-0 Wildcats are the surprise of the Big 12 and quite possibly the nation as they have climbed to #8 in the rankings.

I'm not Mel Kiper or Todd McShay nor have I evaluated Kansas State's talent extensively but, speaking in generalities, I'm guessing they have less talent than Oklahoma, Texas A&M, Texas, and even Missouri yet there they are ahead of all of those schools in the Big 12 standings.

Meanwhile in Ames, Iowa State is still working diligently to install the spread attack successfully.  That may or may not be the best option offensively long term for the Cyclones-trying to "out-quick" and "out-spread" the teams with decidedly more talent.  But it's hard to not look at Kansas State with some envy.

Iowa State is trying to put a square peg in a round hole with their offense while Kansas State is the lone dissenter from the spread offense in the Big 12 and is perhaps, the square peg of the conference.  Yet, that square peg is finding ways to win and taking snaps away from opponents by controlling the clock.