Probably the most frustrating thing watching this year’s Iowa State Cyclones is witnessing the fact that football is a game of inches.  Whether it be fingertips, knees, goal line stands or seams up the middle nothing typifies this year’s team more than that saying.

One or two more executed plays last week against Texas A&M and I might be writing about how this team pulled off the biggest upset of the Paul Rhoads era.  Even newly minted starting quarterback Jared Barnett mentioned that they were a handful of plays away from a completely different ball game last week.

This Cyclone team continues to improve each week but time is running out and a win in three of the final five games is necessary to even become bowl eligible.  At some point losing begins to stink and I think we’re already past that point with things looking even more doubtful with a trip to Lubbock this weekend.

Steele Jantz threw an interception on Iowa State’s first play of the game but the Iowa State defense bowed up to keep Texas A&M in check early.  Poor execution and a couple of questionable calls kept Iowa State from putting together a complete upset bid and the Cyclones eventually fell to the Aggies 33-17.

Texas Tech pulled off arguably the biggest win in school history and unquestionably the biggest one under Tommy Tubberville by upsetting Oklahoma in Norman by a score of 41-38.  Seth Doege threw for 441 yards and connected with Alex Torres on three of his four touchdown passes.  The win snapped Oklahoma’s 39-game home winning streak and was only the 3rd home defeat for Bob Stoops.

Iowa State is 2-7 all-time against Texas Tech with both wins coming in the past decade and inside of Jack Trice Stadium.  There were a handful of memorable moments in these games.  Just a handful.

Seneca Wallace - "The Run" (via aplarsen)

Game Highlights and Celebration vs. Texas Tech (via isuvideo)

The scoring disparity between the home and away games is striking.  As previously mentioned, both of Iowa State’s wins against Tech game in Jack Trice Stadium and the Cyclones averaged 41.5 points to Tech’s 27.5.  On the road however the Cyclones are averaging just 18.0 points per game while the Red Raiders are averaging 40.7.  This lends even more credence to the fact that Lubbock is a tough place to go and win.

Just like in 2010 this game is going to have to be a shootout for Iowa State to win.  Austen Arnaud had a career day in this game and threw for four touchdowns on 20 of 28 passing.  Both Alexander Robinson and Shontrelle Johnson topped 100 yards rushing and helped Iowa State move the ball consistently with 190 passing yards and 251 yards on the ground. 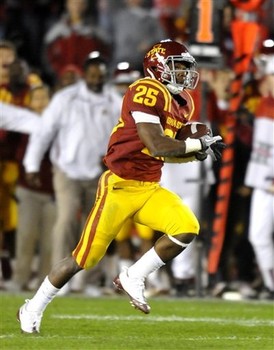 This year’s team is capable of the same type of big play busting ability and will have to do so to keep pace with the Red Raiders.  Texas Tech’s defense ranks 96th in the country and 105th in rush defense and will continue to give up yards throughout the season.  Some of this is the product of their offensive efficiency and part of it is a product of learning their third defensive system in as many years.

Needless to say, Jared Barnett is going to have to be efficient this game.  He made some very accurate throws last week and stepped up into the pocket on many occasions and found an open receiver (usually Josh Lenz).  Not only will he have to do that on Saturday but he will need to be better about the boneheaded throws he made last week that could have resulted in interceptions.  Paul Rhoads mentioned on his show Sunday night that Jantz still got most of the 1st team snaps last week but with Barnett being the starter since the end of the A&M game, he should see the majority of snaps this week.  That will help him eliminate the mental errors and hopefully improve his passing on screens.

The Cyclones should come out playing ball control through the run game and the short passing game.  Barnett does not have the arm to throw downfield and let receivers run under it so emphasis is going to be placed on his strengths which will be his accuracy and ability to move the ball with his feet.  Expect a healthy dose of the zone read against a defense that struggles to stay in front of the ball.

How do you stop a offense ranked in the top 5 in the country?  You don’t.  It would be foolish to believe that an Iowa State defense that ranks 112th in the country could shut down Texas Tech.  That being said, the emphasis will be on minimizing the big plays, challenging the receivers at the right time and generating a handful of turnovers.

When the Red Raiders came to Ames last year they did not play their best game with three turnovers, which included a Detron Lewis fumble without even being touched.  Those types of bounces cannot be expected to happen again, especially against a team that ranks 15th in the country in turnover margin.  However, for Iowa State to have a chance, things like that will have to happen.

If there is a bright spot for the defense it’s the pressure they generated on Ryan Tannehill and the performance of the secondary over the course of the entire game.  Iowa State’s pass defense now ranks 3rd in the Big XII and that will surely be tested over and over again on Saturday. 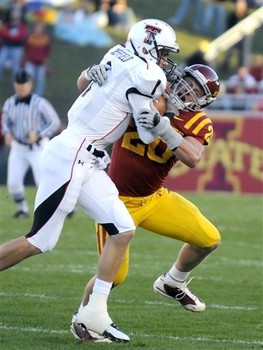 The opportunistic defense that Paul Rhoads coached in 2009 and made brief flashes in 2010 will have to make a huge appearance on Saturday if the Cyclones are to come out of Lubbock with a win.  It’s been a year (Texas 2010) since Iowa State’s secondary has had an interception and if that streak continues this game is over quickly.

WRNL Lead Pipe Action Prediction: Current Season 3-3-1: The Iowa State secondary gets their first interception in over a year.

Unlikely to Happen but We’ll Light a Dumpster on Fire if it Does: Current Season 2-5: With a 3-4 team playing a Top 25 team on the road this category again begs for a dumpster burning with a win.  Plus we’ll need to show up those guys in Morgantown if they start rioting when Louisville comes to town this weekend.

Head and heart are in complete conflict on this game.  My head says that we have won two games all time against Texas Tech and have been outscored by an average of 32 points in Lubbock in Big XII play but my heart says that the Red Raiders’ defense is one of the softest in the conference and the hangover from the Oklahoma win could be in full effect despite this.

More important than the hangover though is the play of a redshirt freshman quarterback with only four quarters of film to analyze.  Barnett has shown himself to be accurate, a good runner and a quarterback capable of moving the chains.  Were it not for some incredibly ill-timed drops by receivers last week we may be talking about how Barnett will lead Iowa State to the promised land.

Alas, the key will be if Barnett does not duplicate Jantz’s ability to turn over the ball.  Iowa State has been in every game this season (except Missouri) and almost every time you can chalk up the loss to turnovers and ones that came at the worst possible time.

If I was a betting man I would say Texas Tech is going to come into this game trying to force mistakes out of Barnett.  If he remains composed and moves the chains with the occasional big play then this offense will have the same type of performance as last year and the defense will get to do the rest.

PS - This is the first time I have done this, but please post your predictions below.  I want to see if I'm being too much of a homer this week by only predicting a 13 point loss or if others feel that this game in Lubbock could be a good one.