WRNL has carefully charted the progression of Big 12 quarterbacks through the first 5 weeks of this freshly-opened 2011 college football season in an effort to find the next signal-calling Savior.  "All of them?" you ask.  Well, no.  We have very limited attention spans. 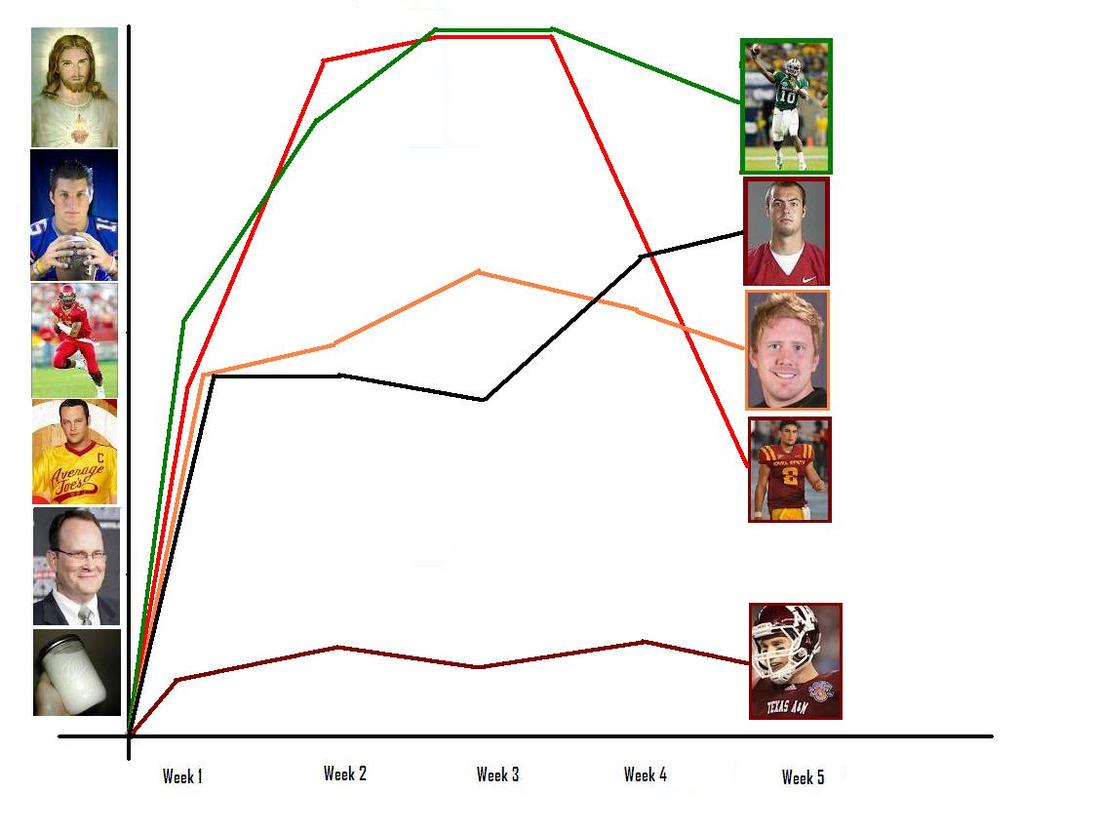 Griffin is on another planet right now - through 4 games he has a ridiculous 230 passer rating to accompany his 18 TDs. That's not even the impressive part, he also holds a 82% completion percentage with only a single interception.  Baylor had to work their asses off to lose to KSU this past weekend with Griffin's impressive play continuing.  Tom Brady hangs his head in shame at RGIII stat lines.

Jones has done nothing but win and produce for the Sooners this season, and his QB rating of 165 would look great if he didn't have to compare it to Robert "IDDQD" Griffin III.  He was particularly good against Ball State this weekend, but then Ball isn't even a real state now is it?  10 TDs, 5 INTs.

Weeden cannot take a picture that doesn't make him look like an overly touchy-feeling church camp choir director.  That said, the fucker can throw a football.  Weeden is old (he turned 47 last week), red-headed, and rocks a rapist 'stache ... but he also bitched-slapped A&M two weeks ago, so he's alright in my book. 156 QB rating, 10  TDs, 6 INTs.

"Steele Jantz" ... just saying it sends a tingle through the naughty parts. Steele's stat line can't quite hang with the big boys:  112 passer rating, 7 TDs, 7 INTs, but what he lacks in numbers he makes up for in awesome.  Steele Jantz has led the Cyclones to 3 come-from-behind victories against top FCS team UNI, Big 10 bottom feeder Iowa and Big East/ACC member UConn all while trailing at some point in the 4th quarter.  He also lived in his truck for a year surviving on nothing but Jack Daniels and rage.

Ryan plays for the Texas A&M Aggies, and is a sonofabitch. His play this season has mirrored his school, all talk with no finishing power. What's in that jar you ask?  Shaggy can answer that.

Where's The Rest Of 'Em?

This is literally all the QBs left in the Big 12, everyone else has left the conference.